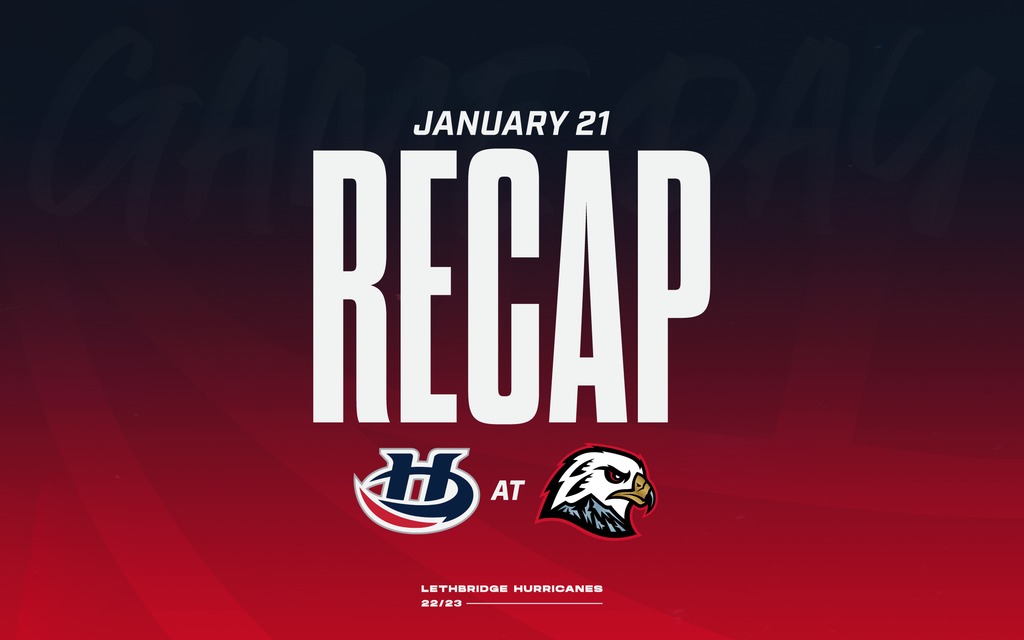 Portland, OR – The Lethbridge Hurricanes played their 2,500th game in team history on Saturday night as they dropped a 5-2 decision to the Portland Winterhawks at the Veterans Memorial Coliseum.

It was the final of a four-game road trip for the Hurricanes which saw them enter on a seven-game point streak after back-to-back overtime losses in the US Division. Lethbridge made their first visit to Portland since January of 2019. The two teams traded chances in the first period which saw the Hurricanes outshoot the Winterhawks 16-13 in the opening frame. Trae Wilke had a great early chance to open the scoring on a point-blank chance with an empty-net but lifted the puck high over the glass. Portland had an early power play but Harrison Meneghin – who made his 30th start of the season – stood tall keeping the ‘Hawks at bay. The ‘Canes opened the scoring with a power play goal of their own late in the frame with just 5:39 remaining as Logan Wormald matched his jersey number with his 18th goal of the season in his 100th career game to make it 1-0 Lethbridge; Jett Jones and Tyson Laventure earned the assists on the goal as the Hurricanes were up after one period.

The Hurricanes had a great chance to double their lead on a shorthanded breakaway by Tyson Laventure but he couldn’t solve Winterhawks goaltender Jan Spunar. Portland tied the game at the 9:54 mark on a power play when Robbie Fromm-Delorme redirected a Chaz Lucius pass to tie the game 1-1 with his 24th goal of the season. Just over three-minutes later, Lucius ripped home his first WHL goal from the high-slot beating a screened Meneghin to give the Winterhawks a 2-1 lead; Mark Alscher earned the only assist on the go-ahead goal. Portland doubled Lethbridge in shots in the second period outshooting the Hurricanes 16-8.

In the third period, the Hurricanes scored an early goal to draw even as Tyson Laventure redirected is 15th goal of the season tipping a Nolan Bentham point shot to make it 2-2 just 2:57 into the final frame; Joe Arntsen earned the second assist on the equalizer. Portland pulled back in front with a power play goal by Gabe Klassen at the 7:23 mark to make it 3-2. Winterhawks added another goal on a partial two-on-one as Diego Buttazzoni slipped one through the legs of Meneghin to make it 4-2 Portland as they scored two goals in a span of 2:33. The Hurricanes pulled the goaltender late to attempt a comeback, but the ‘Hawks sealed the win with an empty-net goal by Fromm-Delorme – his second of the night – to make it a 5-2 Portland victory.

The Hurricanes were outshot 12-6 in the third period and 41-30 in the contest. Lethbridge was 1/3 with the power play while Portland went 2/3 with the extra man.

The loss for the Hurricanes ends their seven-game point streak as they fall to 3-1-3-1 in their last eight games. Lethbridge finishes they four-game road trip collecting four out of a possible eight points going 1-1-2-0 in that stretch as the ‘Canes fall to 24-16-3-2 on the season.