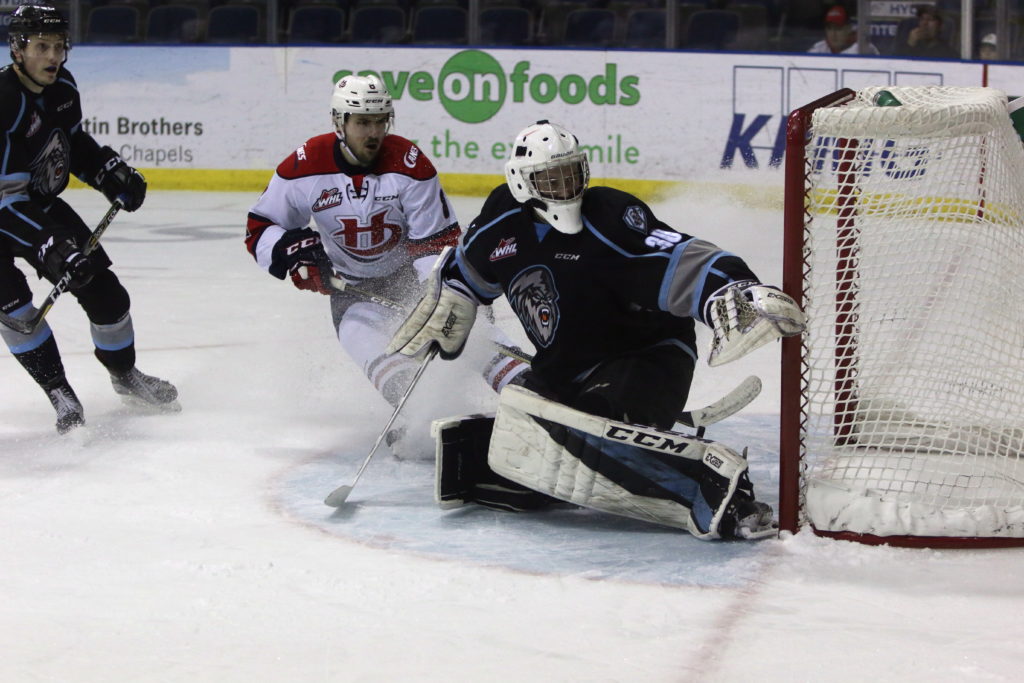 Cranbrook, BC – The Lethbridge Hurricanes concluded a five game road trip on Tuesday in Cranbrook with a 7-3 loss to the Kootenay Ice.

It was an even first period that saw Kootenay outshoot the Hurricanes 15-11 in the opening frame. The Ice had an early power play in the game as Koletrane Wilson was issued a hooking penalty just 1:34 into the game but Kootenay was unable to capitalize with the extra man. The ‘Canes opened the scoring at the 11:14 mark as Jordy Bellerive one-timed his 30th goal of the season passed Duncan McGovern to make it 1-0; Brad Morrison and Keltie Jeri-Leon picked up the assists. The Ice pulled even with just 1:55 left in the period as Brad Ginnell knocked home a loose puck to tie it 1-1; the goal was originally waived off but was reviewed and overturned as the game was tied after twenty minutes of play.

The second period was a wild twenty minutes of hockey. After a Brad Morrison goaltender interference penalty, Kootenay struck with the power play just 56 seconds into the period to make it 2-1 Ice. Just 41 seconds later the Ice scored again as Kaeden Taphorn buried his fourth of the year to make it 3-1. The other Taphorn brother chipped in as Keenan scored his at the 2:28 mark to make it 4-1. Kootenay made it 5-1 as Brett Davis snapped home his 15th as the Ice scored four goals in a span of 2:39. Reece Klassen replaced Logan Flodell who allowed five goals on 21 shots. The Hurricanes ended the run of five goals for the Ice as Jeri-Leon buried a one-timer for his fourth of the year on a centering pass by Morrison to make it 5-2. Jeri-Leon returned the favour to Morrison less than five minutes later as he rifled home his 17th of the year to pull the ‘Canes to within two making it a 5-3 lead for the Ice after forty minutes of play. Kootenay outshot Lethbridge 11-5 in the second period.

The Ice put themselves back up by three early in the third period as Colton Veloso redirected a Colton Kroeker centering pass by Klassen just 26 seconds into the period to make it 6-3 Kootenay with another power play goal. The ‘Canes pulled the goaltender late with a power play opportunity, but the Ice sealed the win as Davis scored his second of the night into the empty net making it a 7-3 final.

The Hurricanes wrap up the five game road trip with a 2-2-1-0 record after dropping the last two in regulation. The ‘Canes are now 22-21-4-0 on the season as they remain three points better than the Ice for second in the Central Division.

The Hurricanes will return home on Wednesday to welcome the Kelowna Rockets at the ENMAX Centre at 7:00pm. Tickets for the game can be purchased online, by calling 403-329-SEAT (7328) or by visiting the ENMAX Centre Ticket Centre.