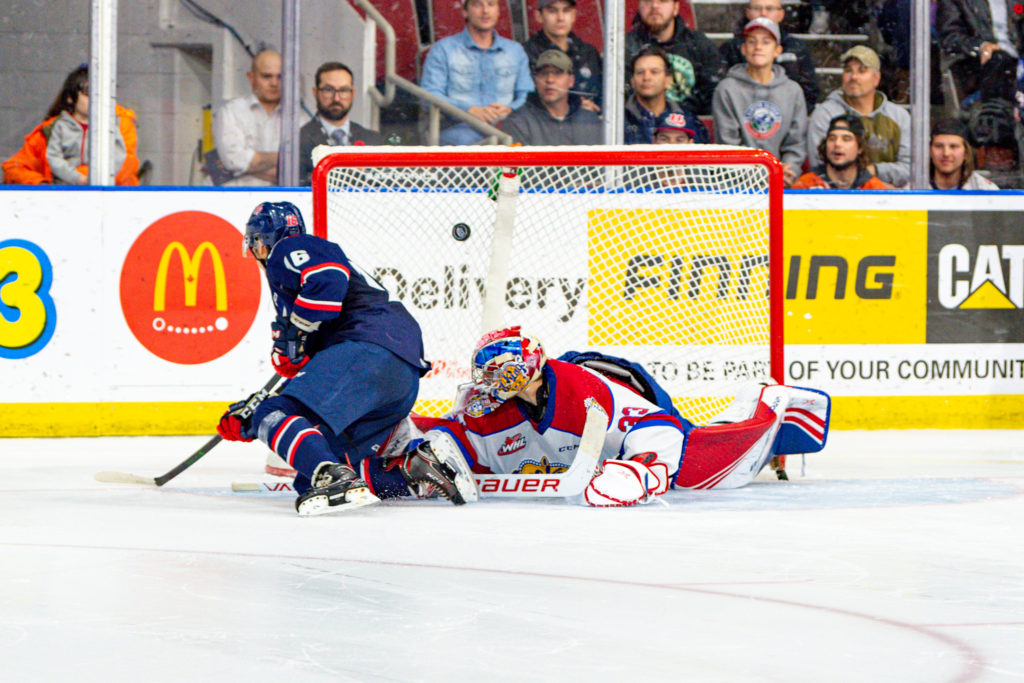 Lethbridge, AB – The Lethbridge Hurricanes played the middle of a three-game homestand on Friday as they earned a wild come-from-behind 4-3 shootout victory over the Edmonton Oil Kings in front of 3,696 fans at the ENMAX Centre.

It was a fast-paced first period that saw the two teams’ trade chances throughout the opening frame. Edmonton opened the scoring on a power play when Scott Atkinson tipped home his sixth goal of the season to make it 1-0 for the Oil Kings 6:18 into the game. The ‘Canes had a wave of pressure in the back-half of the period including a pair of goal posts by reigning WHL Player of the Week Oliver Okuliar on the same shift. After the flurry of pressure for the ‘Canes, Edmonton was able to doubled their lead when Liam Keeler beat Carl Tetachuk over the glove with a high-slot wrist shot while four-on-four to make it 2-0 after one period. Shots were even 11-11 in the first period.

Edmonton carried the play in the second period as they outshot the Hurricanes 14-6 in the middle frame. The Oil Kings added to their lead with a four-on-three power play goal by Riley Sawchuk at the 13:03 mark as he beat a sliding Tetachuk to make it 3-0. Lethbridge had a few good chances in the middle frame but could not solve Sebastian Cossa who had stopped all 17 Hurricanes shots in the middle stanza.

The Hurricanes dominated the third period as they outshot the Oil Kings 21-6. Lethbridge got on the board with a power play goal at the 5:26 mark when Oliver Okuliar extended his point-scoring streak to 10-straight games with his WHL-leading 16th goal of the season to make it 3-1. Edmonton’s Carter Souch was assessed a penalty-shot with 9:11 to go in the game and Tetachuk made a massive pad save to keep the Hurricanes to within two.

The Hurricanes outshot the Oil Kings 39-35 in the game. Lethbridge went 2/5 on the power play while Edmonton went 2/4 with the extra man.

The victory for the Hurricanes was the ‘Canes first of the season when trailing after forty minutes of play this year. It improved the Hurricanes record to 13-4-0-3 on the season and extended their point streak to 12-straight games having gone 10-0-0-2 in that span.

With the victory, the Hurricanes sit stand-alone in first place in the Central Division and are tied atop the WHL standings with the Prince Albert Raiders with 29 points on the year.

The Hurricanes play the final of a three-game homestand on Saturday when they welcome the Tri-City Americans at the ENMAX Centre at 7:00pm. Tickets can be purchased online at www.enmaxcentre.ca, by calling 403-329-SEAT (7328) or by visiting the ENMAX Centre Ticket Centre.