Hurricanes Fall 4-3 in OT to Rockets 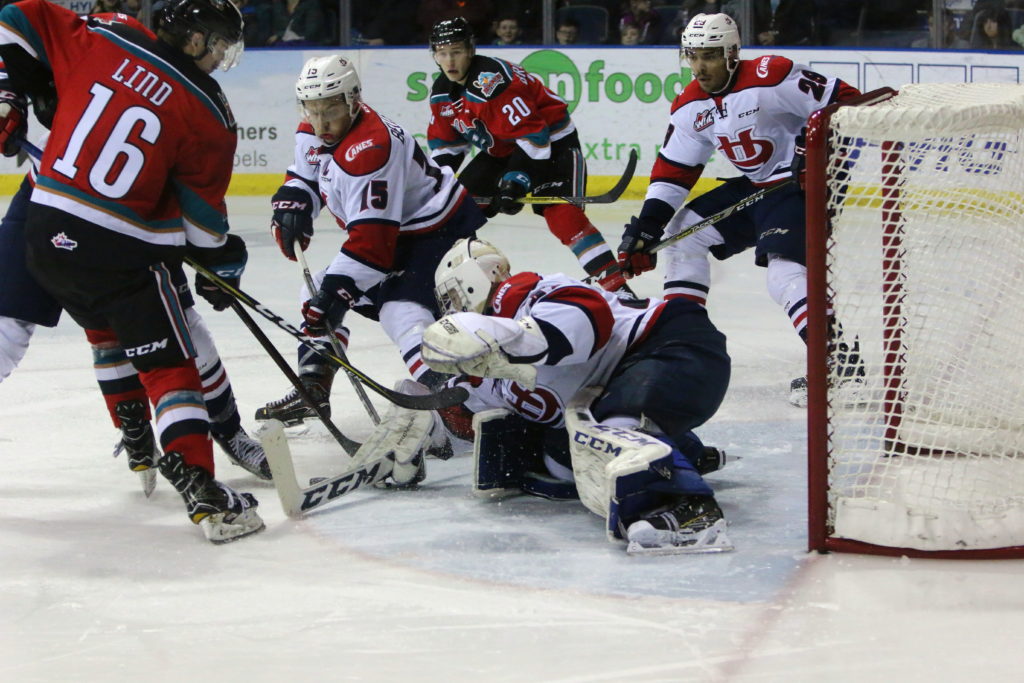 Lethbridge, AB – The Lethbridge Hurricanes returned to the ENMAX Centre after a five game road trip as they welcomed the Kelowna Rockets and for the second time in a week the ‘Canes were handed a 4-3 overtime loss to the Rockets in front of 3,874 on Wednesday.

It was an even first period between the ‘Canes and Rockets that ended scoreless after twenty minutes. The ‘Canes were outshot 14-8 in the opening frame. Both teams had an opportunity on the power play but failed to score with the extra man. Hurricanes won nine of 16 face-offs in the opening frame.

In the second, Kelowna struck twenty seconds into the period to make it 1-0 as Kaedon Korczak pinched in and beat Reece Klassen over the glove to give the Rockets a lead. The ‘Canes answered back just 12 seconds later as Jadon Joseph buried his fifth of the season on a centering pass from Zane Franklin. Kelowna pulled back ahead at the 10:02 mark as Kole Lind one-timed home his 23rd of the season to put the Rockets ahead 2-1 with a power play goal. The Hurricanes tied the game before the period was out as Jordy Bellerive moved in on a two-on-one and snapped one over Cole Tisdale to make it a 2-2 tie after forty minutes. Shots favoured the ‘Canes 12-10 in the second period.

The Rockets came out firing in the third period as they outshot the Hurricanes 19-7 in the final twenty minutes. The ‘Canes however would take the lead with just six minutes left in the game as Igor Merezhko had a point shot pinball off a body and by Tisdale to give the ‘Canes a 3-2 lead. Lethbridge had a great chance to seal it as Franklin had an empty-net but he put the shot wide only to see the Rockets counter up ice and Carsen Twarynski snap one by Klassen to tie the game 3-3 with 38 seconds left in regulation.

The game would go to overtime and the Rockets outshot the ‘Canes 6-1 in the extra session. Lind ended the game with 26 seconds left in the overtime period as he completed a four point night propelling the Rockets to a 4-3 overtime win over the Hurricanes.

The Rockets outshot the Hurricanes 49-28 in the game. Lethbridge went 0/2 on the power play while Kelowna was 1/2 with the extra man.

The loss for the ‘Canes was their third straight defeat, but do earn a valuable single point as they fall to 22-21-5-0 on the season. The ‘Canes are now 0-5-0-0 in games decided in overtime this season.

The ‘Canes will return to action on Friday when they welcome the Moose Jaw Warriors at the ENMAX Centre. Tickets for the game can be purchased online, by calling 403-329-SEAT (7328) or by visiting the ENMAX Centre Ticket Centre.