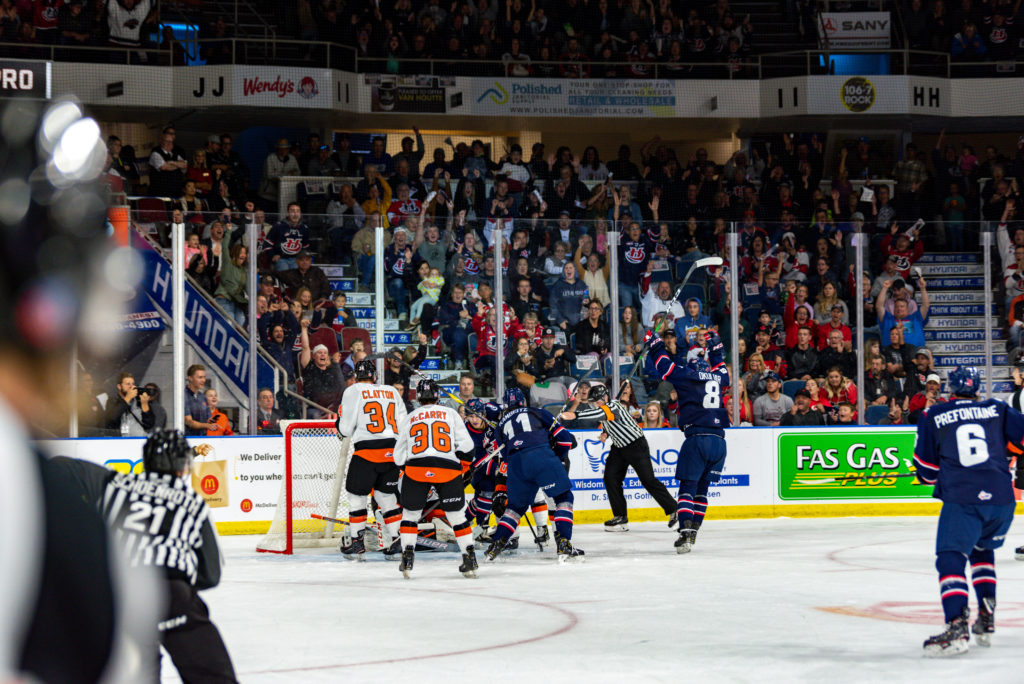 Lethbridge, AB – The Lethbridge Hurricanes opened their 2019-2020 regular season with a 4-3 shootout loss on Friday night against the Medicine Hat Tigers at the ENMAX Centre.

The Hurricanes were without Calen Addison – who was reassigned Friday by the Pittsburgh Penguins – as well as Dylan Cozens who remains with the Buffalo Sabres. The ‘Canes were also without Logan Barlage and Koletrane Wilson who were suspended for the opening game.

It was a strong first period for the Hurricanes who outshot the Tigers 16-13. The ‘Canes were buzzing early and had a few good chances, including a goal post by Chase Wheatcroft. Medicine Hat pushed back in the midway point of the period but could not solve Carl Tetachuk as the game remained scoreless. Lethbridge opened the with 10.7 seconds left in the period when D-Jay Jerome banged home a loose puck past Tigers goaltender Mads Sogaard to make it 1-0; Dino Kambeitz and Alex Cotton earned the assists as the ‘Canes lead after twenty minutes of play.

Both teams had chances on the power play in the middle frame. The Hurricanes doubled their lead at the 10:31 mark on a deflection goal by Dino Kambeitz – his first as a ‘Cane – to make it a 2-0 game; Oliver Okuliar and Cotton earned the assists on the goal that came just after a power play had expired. Medicine Hat cut the Lethbridge lead in half with a power play goal at the 12:14 mark as Cole Sillinger ripped home his first of the year to make it 2-1. The Tigers held the edge in shots 18-9 in the middle frame.

In the third period, the Hurricanes added to their lead as Jacob Boucher scored his first WHL goal at the 2:48 mark while shorthanded to make it 3-1 for the Hurricanes; Zack Stringer earned the lone assist on the goal. Tigers scored twice in a span of 1:27 as Bryan Lockner and Ryan Chyzowski scored to tie the game at 3-3 to force overtime. Medicine Hat outshot the ‘Canes 18-9 in the third period.

Neither team scored in overtime as the Tigers held the edge in shots 4-3 with the five-minute three-on-three play. The game went to a shootout and while Jerome and Kambeitz both scored, all three Tigers shooters scored with Chyzowski potting the winner to lift the Tigers to the win.

Medicine Hat outshot Lethbridge 51-37 in the game. The ‘Canes went 0/4 on the power play while the Tigers went 1/4 with the extra man.

The loss for the Hurricanes was their second straight defeat in Dairy Queen Home Openers going back to last season. The ‘Canes start the season with a 0-0-0-1 record on the year. The Hurricanes will travel to Medicine Hat tomorrow to face the Tigers at 7:30pm at the Canalta Centre. You can hear that game on 106.7 Rock.