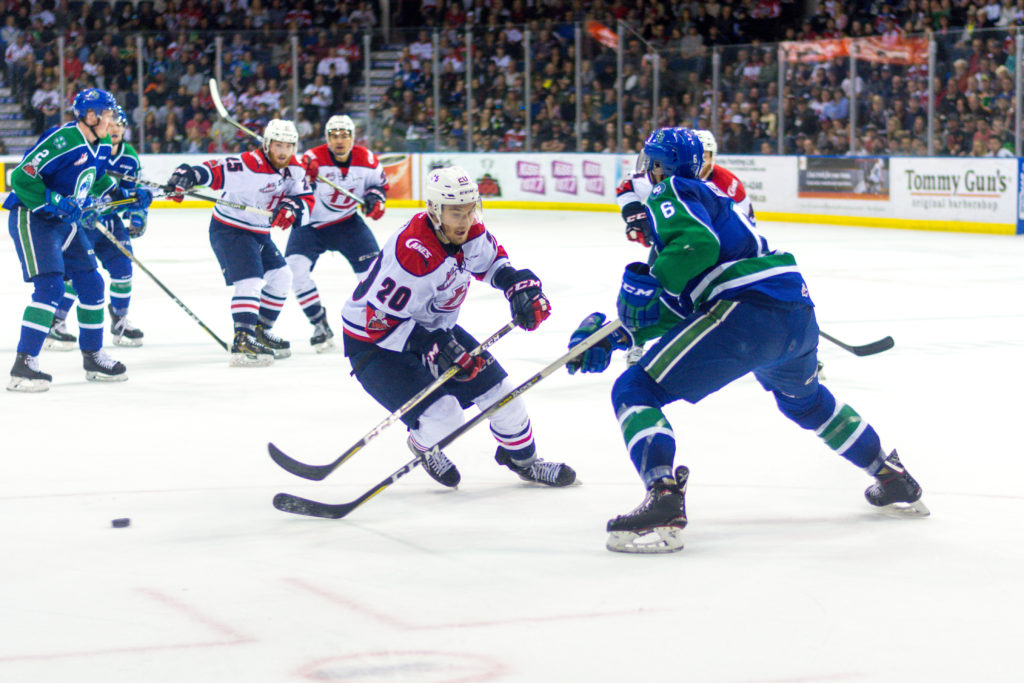 Swift Current, SK – The Lethbridge Hurricanes were handed a 4-3 loss on Saturday night by the Swift Current Broncos at the Innovation Credit Union I-Plex as they now trail the best-of-seven Eastern Conference Championship Series 3-2.

It was a back-and-forth first period that did not provide a goal. The ‘Canes had an early power play opportunity early in the game that they were unable to capitalize on despite a few good chances. The Broncos had the best scoring chance in the period late on a power play as Glenn Gawdin, who returned after missing Games 3 and 4 in Lethbridge, was robbed by Logan Flodell to keep the game scoreless after twenty minutes. Shots favoured the Broncos 12-8 in the first period.

The Broncos opened the scoring at the 13:12 as Max Patterson banged home a loose puck in front to make it 1-0 Swift Current; Giorgio Estephan and Sahvan Khaira picked up the assists. The Hurricanes answered back with a game-tying goal with 1:15 left in the period as Zane Franklin scored his second goal of the playoffs to make it 1-1; Igor Merezhko and Tate Olson earned the helpers. Following the Franklin goal, there was a scrum that resulted in a Broncos power play. On the man advantage, Estephan put Swift Current back ahead 2-1 with his ninth of the playoffs as the Broncos held a 2-1 lead after two periods. Shots in the middle frame favoured the Broncos 14-6.

In the third period, the Broncos added to their lead early in the third period as Colby Sissons beat Flodell with a slapshot to make it 3-1 just 2:37 into the period. The ‘Canes pulled the game to within on just 1:20 later off a face-off as he snapped home his 16th goal of the post-season to make it 3-2; Jordy Bellerive earned the lone assist on the goal. Swift Current once again answered as Estephan scored his second of the night at the 6:41 mark to make it 4-2 Broncos. The ‘Canes once again pushed back late with a power play goal by Egor Zudilov to make it a 4-3 game with 1:01 left in the game but that was as close as they’d come.

The Hurricanes outshot the Broncos 15-6 in the third period but were outshot 32-29 overall in the game. The ‘Canes went 1/3 on the power play while Swift Current was 1/4 with the extra man.

The Hurricanes now trail the best-of-seven series 3-2 as the home team has won all five games thus far in the series.

The Hurricanes will welcome the Broncos on Monday at 7:00pm at the ENMAX Centre in Game 6 of the Eastern Conference Championship as they will look to force a Game 7 on Tuesday. Tickets for the game can be purchased online, by calling 403-329-SEAT (7328) or by visiting the ENMAX Centre Ticket Centre.