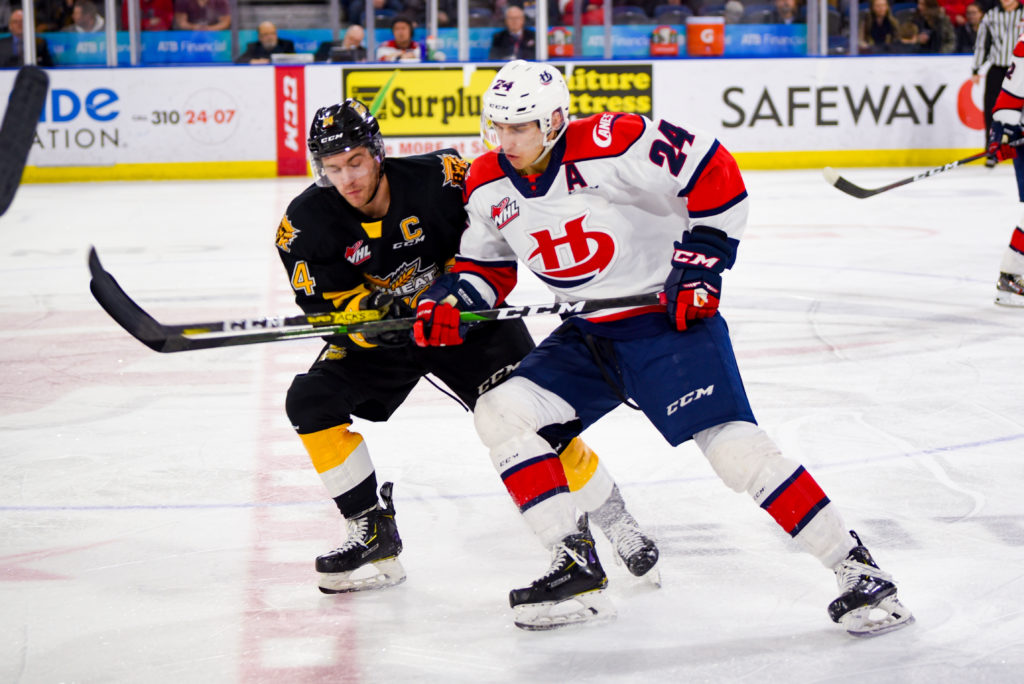 Lethbridge, AB – The Lethbridge Hurricanes played the final of a four-game homestand on Saturday as they were downed 4-3 by to the Brandon Wheat Kings at the ENMAX Centre.

Prior to the game, the Hurricanes held a pre-game ceremony to induct alumni Shane Peacock and Byron Ritchie into the newly minted Hurricanes Wall of Honour. The ‘Canes fed off the energy to start the game and had a great start outshooting the Wheat Kings 4-0 early. Lethbridge opened the scoring at the 6:22 mark as Dylan Cozens scored his team-leading 34th goal of the year to make it 1-0; Alex Cotton and Oliver Okuliar earned the assists. The Hurricanes were outshot 10-6 in the opening frame.

The Wheat Kings were the better team in the second period as they tied the game early when Ridly Greig scored his 24th goal of the season just 3:31 into the frame to make it 1-1; Lynden McCallum and Dom Schmiemann scored the assists on the equalizing goal. Brandon took their first lead as Connor Gutenberg ripped one over the glove of Bryan Thomson at the 9:44 mark to make it 2-1 for the Wheat Kings. Just over two minutes later, the ‘Canes tied the game on a goal-mouth scramble that was knocked in by Cozens for his second of the night to tie it 2-2. Lethbridge outshot Brandon 15-12 in the middle frame.

In the third period, the Wheat Kings took their second lead of the game as Marcus Sekundiak snapped one by Thomson just 6:23 into the period to give Brandon a 3-2 lead. The ‘Canes got into penalty trouble in the middle part of the period and the Wheat Kings took advantage doubling their lead to 4-2 with a power play goal by Cole Reinhardt at the 9:48 mark. Lethbridge pushed back pulling the goaltender for the extra attacker and Cozens was able to complete the hat-trick – his sixth of his career and third of the season – to pull the ‘Canes to within a goal. Lethbridge once again pulled the goaltender to attempt to find the game-tying goal but they could not beat Ethan Kruger as the Wheat Kings hung on to the 4-3 final.

The Hurricanes were outshot 16-8 in the third period as the Wheat Kings held the edge in shots 38-29 in the game. Lethbridge went 0/3 on the power play while Brandon was 2/7 with the extra man.

The loss for the Hurricanes ends a two-game winning streak as they end a four-game homestand with a 2-2-0-0 record while falling to 17-8-2-4 overall at the ENMAX Centre. Lethbridge’s total record fell to 36-16-2-5 on the season.

The Hurricanes will end a three-in-three weekend on Sunday afternoon as they begin a four-game road trip in Calgary against the Hitmen. The Hurricanes will be back at the ENMAX Centre on Friday, March 13th when they welcome the Edmonton Oil Kings at 7:00pm. Tickets can be purchased online at www.enmaxcentre.ca, by calling 403-329-SEAT (7328) or by visiting the ENMAX Centre Ticket Centre.