Hurricanes Fall 5-2 in Calgary on Sunday 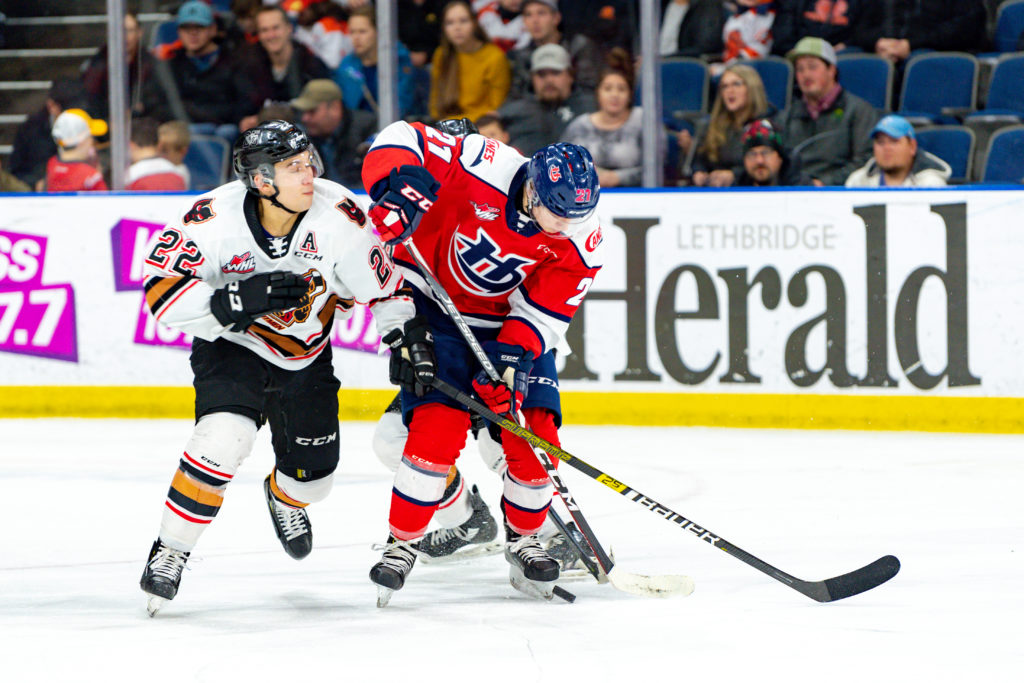 Calgary, AB – The Lethbridge Hurricanes ended the first half of the season on Sunday with a 5-2 loss at Scotiabank Saddledome to the Calgary Hitmen.

It was a strong first period for the Hitmen who only allowed the Hurricanes one shot in the first period while Calgary had 14. Hitmen opened the scoring when Riley Fiddler-Schultz fired one over the glove of Carl Tetachuk to make it 1-0 just 6:52 into the game. Calgary struck on a power play when Carson Focht banged home a rebound to make it 2-0 before another power play goal with just 6.9 seconds left in the period by Riley Stotts to make it 3-0 Hitmen after twenty minutes of play.

The Hurricanes had a much better second period as they scored an early goal to get on the board when D-Jay Jerome scored his 14th goal of the season on a breakaway beating Jack McNaughton with his patented forehand to backhand more to make it a 3-1 game; Koletrane Wilson earned the lone assist on the goal. The ‘Canes had a trio of power play opportunities in the second period but couldn’t capitalize as they tailed 3-1 after forty minutes of play. Shots in the second period favoured Calgary 12-10.

In the third period the Hurricanes had an early chance to pull within a goal when they were issued a power play but a shorthanded goal by Fiddler-Schultz made it a 4-1 Calgary lead. Hitmen added another goal even-strength at the 8:11 mark when Josh Prokop scored his sixth goal of the season to make it 5-1. The ‘Canes rounded out the scoring with a shorthanded goal of their own when Justin Hall scored his sixth of the campaign on a two-on-one to make it a 5-2 final.

The Hurricanes were outshot 37-17 in the game. Lethbridge went 0/5 on the power play while Calgary was 2/5 with the extra man.

The defeat for the ‘Canes drops their season series record to the Hitmen to 1-1-0-0 as the home teams take both games on this weekend home-and-home. The loss for the Hurricanes ended a two-game winning streak as they fall to 20-10-0-5 on the season after 35 games. The ‘Canes league-best road record falls to 11-5-0-1 on the campaign.

The Hurricanes break for the Christmas break and will be back at the ENMAX Centre on Friday, December 27th when they once again welcome the Hitmen at 7:00pm. Tickets can be purchased online at www.enmaxcentre.ca, by calling 403-329-SEAT (7328) or by visiting the ENMAX Centre Ticket Centre.