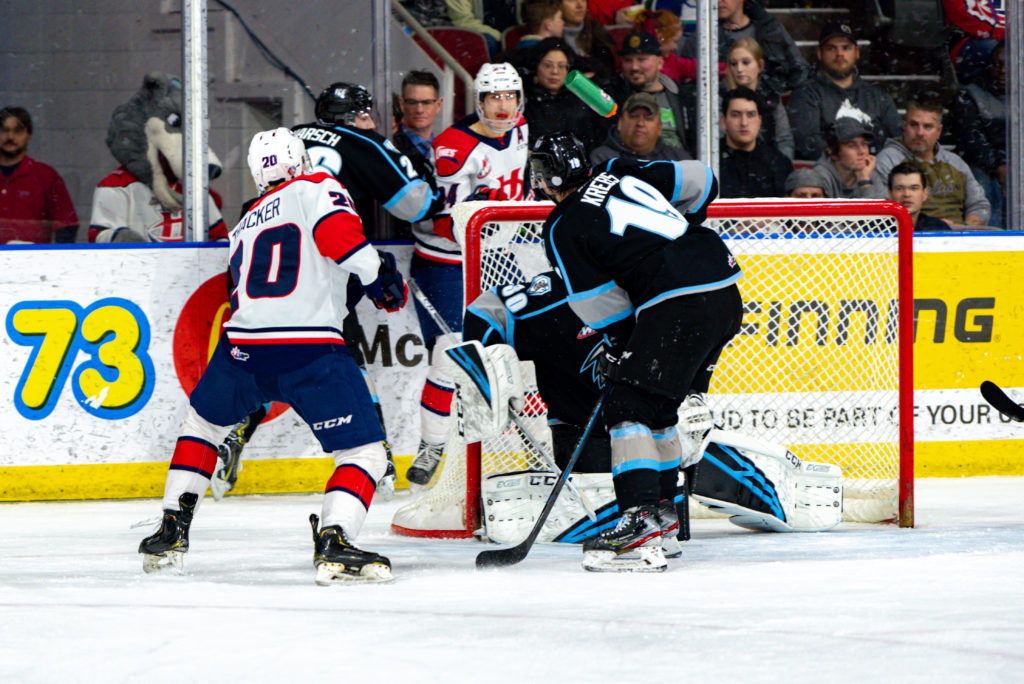 Lethbridge, AB – The Lethbridge Hurricanes played the second straight game against the Winnipeg ICE on Saturday at the ENMAX Centre in hopes of extending their winning streak to six straight games but it was the ICE that earned a 5-2 victory.

It was a see-saw first period that saw the teams both pot a pair of goals in the opening twenty minutes. Winnipeg opened the scoring for the second straight night as Michael Milne snuck one by Bryan Thomson just 3:01 into the game to make it 1-0. The Hurricanes tied the game when Ty Nash rifled home his fifth goal of the season – first on home-ice – at the 6:36 mark to tie the game; Jett Jones and Ty Prefontaine earned the assists on the goal. Winnipeg once again pulled ahead when Isaac Johnson scored a power play goal with 5:08 to go in the first period but the ‘Canes tied the game at 2-2 with a late goal by Alex Thacker who lifted one over the blocker of Liam Hughes with just 19.8 seconds left as the game was even after one period. Lethbridge outshot Winnipeg 16-12 in the first period.

Winnipeg, for the third time in the game, broke the tie early in the second period as Owen Pederson deflected a puck by Thomson on a delayed penalty to make it a 3-2 advantage for the road team. Just over six minutes later, the ICE added to their lead as Jakin Smallwood banged home a loose puck in front of the net to make it 4-2 Winnipeg; that was the end of the night of Thomson who allowed four goals on 16 shots as he was replaced by Carl Tetachuk for the remainder of the game. Hurricanes outshot the ICE 11-8 in the middle frame but trailed 4-2 after forty minutes.

Early in the third period, Winnipeg made it a three-goal lead as Nino Kinder struck just 2:34 into the period lifting one over the blocker of Tetachuk to make it a 5-2 game. Lethbridge attempted a come-back but Hughes stood tall stopping all 12 shots in the final frame to preserve the win for Winnipeg.

The Hurricanes outshot the ICE 12-8 in the third period and 39-28 in the contest. Lethbridge went 0/1 on the power play while Winnipeg went 1/4 with the extra man.

The loss for the Hurricanes ended a five-game winning streak as they fall to 34-13-2-5 on the season. The defeat ended a 10-game point streak on home-ice for the ‘Canes who were 8-0-2-0 in their previous ten home games; they now sit with a 14-6-2-4 record at the ENMAX Centre this season.

The Hurricanes travel to Edmonton for a Family Day game at Rogers Place against the Oil Kings at 2:00pm on Monday afternoon. The ‘Canes will return to the ENMAX Centre on Wednesday to open a four-game homestand against the Spokane Chiefs at 7:00pm. Tickets can be purchased online at www.enmaxcentre.ca, by calling 403-329-SEAT (7328) or by visiting the ENMAX Centre Ticket Centre.