Hurricanes Fall 5-2 to the Rebels 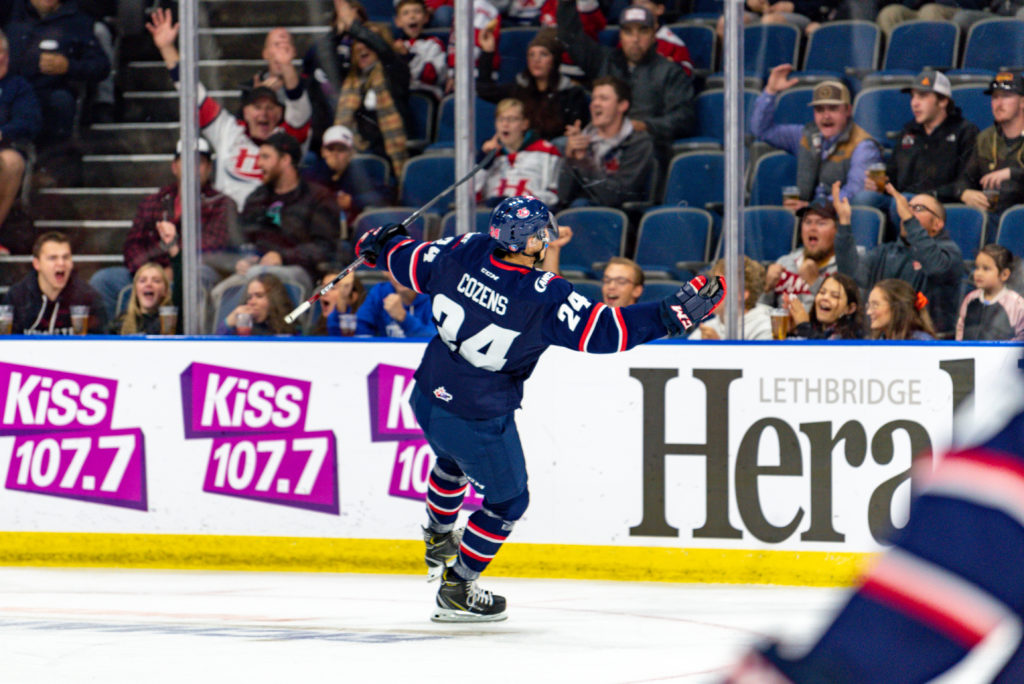 Lethbridge, AB – The Lethbridge Hurricanes played a strong game Friday night at the ENMAX Centre but were handed a 5-2 loss by the Red Deer Rebels.

The Hurricanes received forwards Logan Barlage and Dylan Cozens back into the line-up after Barlage missed the opening weekend due to suspension while Cozens was with the Buffalo Sabres. It didn’t take long for Cozens to make his presence known as he struck to open the scoring at the 6:53 mark beating Ethan Anders for his first goal of the season to make it 1-0 Lethbridge; Oliver Okuliar earned the lone assist on the goal. The lead however lasted only 1:41 as the Rebels answered back on a goal by Brett Davis to tie the game 1-1. The ‘Canes outshot the Rebels 13-6 in the opening period.

In the second period, the Hurricanes carried the play outshooting the Rebels 12-4. The ‘Canes had a great chance early on a power play but D-Jay Jerome was stymied by Anders twice at the side. Red Deer struck twice on the man advantage in the middle frame as both Dawson Barteaux and Josh Tarzwell scored to give the Rebels a 3-1 lead after forty minutes of play.

The Hurricanes peppered the Rebels in the third period outshooting them 17-5. The ‘Canes pulled the goaltender with over three minutes left and were able to capitalize as Calen Addison snapped home a point shot to cut the Red Deer lead to 3-2; Cozens and Koletrane Wilson earned the assists on the goal. The ‘Canes pulled the goaltender twice more but both times Tarzwell scored into the empty-net goal to complete a hat-trick to give Red Deer a 5-2 win.

Lethbridge outshot Red Deer 42-15 in the game. The ‘Canes went 0/2 on the power play while the Rebels went 2/2 with the extra man.

The loss for the Hurricanes dropped their record to 1-1-0-1 on the season after the first three games.

The ‘Canes will travel to Edmonton for an afternoon game at Rogers Place on Sunday against the Oil Kings. The Hurricanes will be back at the ENMAX Centre on Wednesday, October 2nd when they welcome the Saskatoon Blades. Tickets can be purchased online at www.enmaxcentre.ca, by calling 403-329-SEAT (7328) or by visiting the ENMAX Centre Ticket Centre.