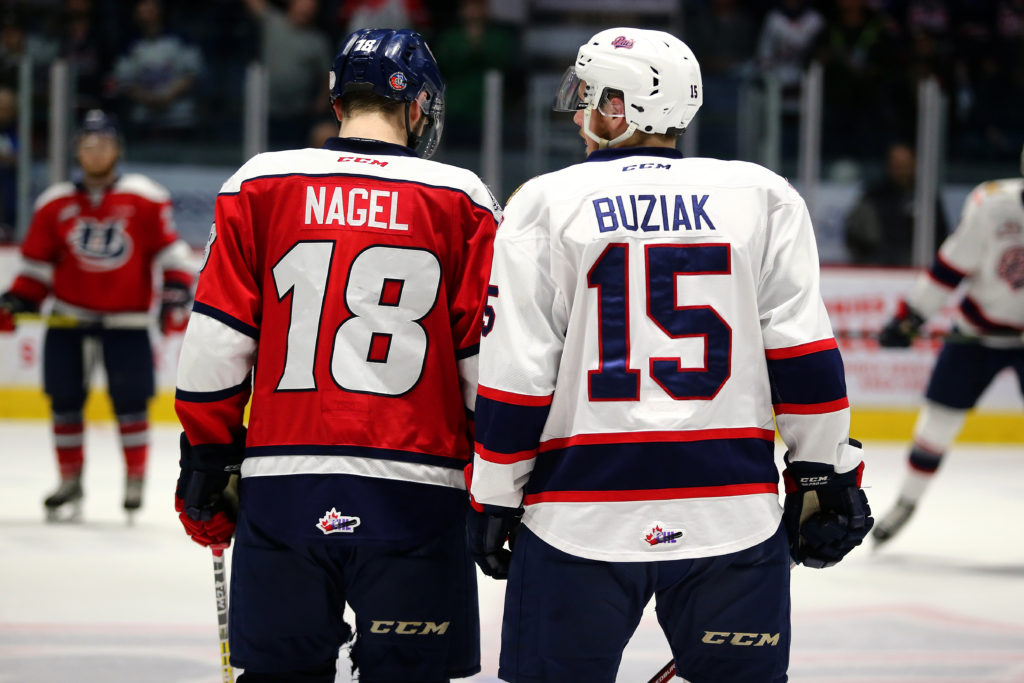 Regina, SK – The Lethbridge Hurricanes looked to take a series lead in Game 5 of their Eastern Conference Championship Series and despite being the better team, the ‘Canes were handed a 5-3 loss by the Regina Pats.

The Hurricanes made two line-up changes in Game 5 as Josh Tarzwell drew in for Ryan Bowen while Ty Prefontaine replaced Kyle Yewchuk. It didn’t take long for the change to pay dividends as on his first shift of the game Tarzwell off a faceoff win was able to beat Tyler Brown with a long-range backhand shot to make it 1-0 just 2:53 into the game – Calen Addison earned the lone assist on the goal for the ‘Canes. Pats had the lone power play of the period but failed to capitalize on it. Regina did eventually tie the game at the 15:37 mark as Josh Mahura let fly with a slap shot that beat Stuart Skinner over the glove to make it 1-1 after twenty minutes of play. Shots favoured Regina 11-10 in the opening period.

It was a see-saw second period that saw four goals scored, two for each side. The ‘Canes took a 2-1 lead at the 3:04 mark as Ryan Vandervlis batted home his seventh of the playoffs on the power play to put the Hurricanes back in front – Giorgio Estephan and Brennan Menell earned the assists on the goal. Pats answered with a power play goal of their own as Sam Steel buried one on a cross-crease pass from Dawon Leedahl to tie the game 2-2. Regina took their first lead of the game as Filip Ahl, who was stopped beautifully by Skinner on a back-door feed on his first shot, was able to bang home the rebound to put the Pats up 3-2. The Hurricanes responded as they tied the game at 3-3 as Egor Babenko roofed one over the glove of Brown right as a power play expired – Dylan Cozens and Addison picked up the assists on the goal as the game was tied 3-3 after two periods. Shots favoured the ‘Canes 15-12 in the middle frame.

Early in the third period the Pats came out flying in hopes of retaking the lead and they did just that. After a lengthy shift in the offensive end, Leedahl was able to snap one by Skinner after receiving a centering pass from Adam Brooks to put the Pats up 4-3 6:25 into the third. The ‘Canes started to press back and drew some power play opportunities, including a ninty-second five-on-three, but were unable to capitalize with the extra man. Regina iced the game with an empty net goal with three seconds left as Austin Wagner buried to make it a 5-3 final.

Shots in the third period favoured the Pats 8-7 but the ‘Canes held the edge 32-31 in the hockey game. The ‘Canes went 1/4 on the power play while Regina went 1/2 with the extra man.

The Pats have now won two straight games and take a 3-2 series lead in the best-of-seven Eastern Conference Championship Series. The Hurricanes will face a must-win situation in Game 6 on Sunday night at the ENMAX Centre at 6:00pm.

Tickets for Game 6 are still available online, by calling 403-329-SEAT (7328) or by visiting the ENMAX Centre or Yates Ticket Centre’s.