Hurricanes Fall 5-3 to Raiders on Friday 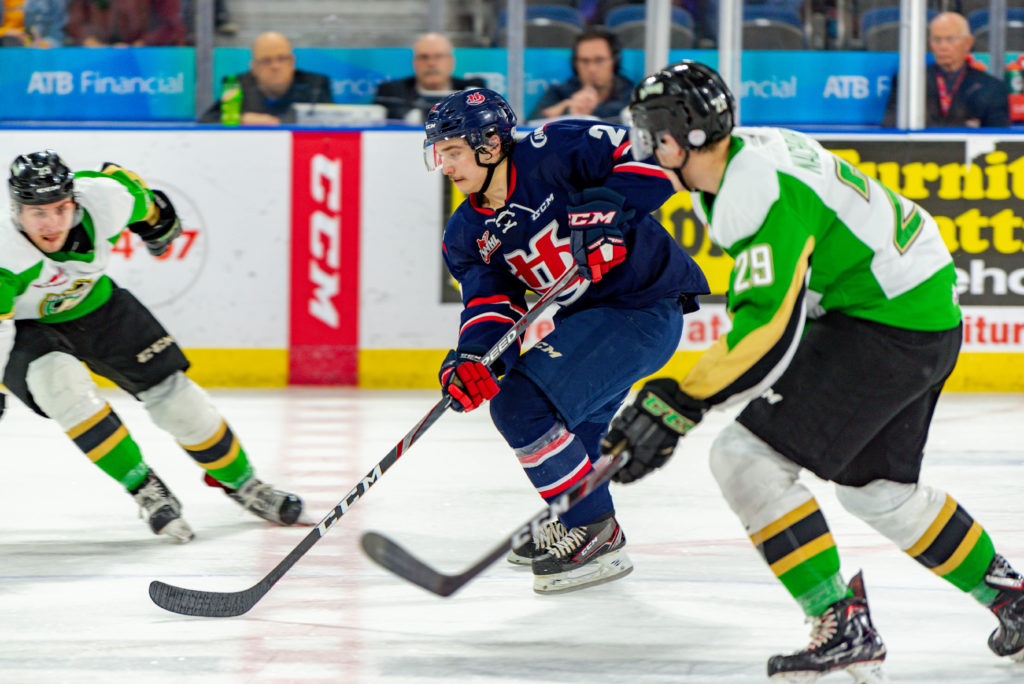 Lethbridge, AB – The Lethbridge Hurricanes returned to the ENMAX Centre as they were downed 5-3 by the Prince Albert Raiders on Friday night.

The Hurricanes had a strong start to the game as they opened the scoring at the 5:06 mark when Noah Boyko scored for the third straight game when he banged home a rebound past Boston Bilous to make it 1-0; Zack Stringer and Calen Addison earned the assists on the goal. Prince Albert tied the game just 1:12 later when Ozzy Wiesblatt poked home a loose puck past Carl Tetachuk to make it 1-1. Raiders took their first lead when Kaiden Guhle scored for the fourth straight game before the WHL points-leader Aliaksei Protas scored shorthanded to make it 3-1 for the Raiders after one period of play. Prince Albert held the shots lead outshooting the ‘Canes 14-10 in the opening frame.

Lethbridge had a strong start to the second period as they struck on a power play at the 4:11 mark to cut the Raider lead to one as D-Jay Jerome snapped home his 11th goal of the season; Stringer and Koletrane Wilson earned the assists on the goal to make it 3-2. Just 47 seconds later, the ‘Canes tied the game when Logan Barlage ripped home his sixth goal of the season extending his goal scoring streak to three-straight games to make it a 3-3 tie. Hurricanes outshot the Raiders 14-5 in the middle frame.

In the third period, the Raiders pulled ahead when Daniil Stepanov scored his second goal of the season to put Prince Albert ahead 4-3 just 6:10 into frame as he was left all alone in front of the net before outwaiting Tetachuk. The ‘Canes pressed outshooting the Raiders 9-8 in the third period but could not generate a tying goal before Protas sealed the win for Prince Albert with an empty net goal to make it a 5-3 final.

The Hurricanes outshot the opposition for the ninth straight game as they held the edge 33-27 in the game. Lethbridge went 1/4 on the power play while Prince Albert went 0/2.

The loss for the Hurricanes ends a two-game winning streak as they fall to 6-4-0-2 on home ice. The defeat drops the ‘Canes overall record to 15-7-0-3 on the season.

The Hurricanes will continue a stretch of five games in five different cities on Saturday when they visit the Red Deer Rebels. The ‘Canes will be back at the ENMAX Centre on Wednesday when they welcome the Regina Pats at 7:00pm. Tickets can be purchased online at www.enmaxcentre.ca, by calling 403-329-SEAT (7328) or by visiting the ENMAX Centre Ticket Centre.