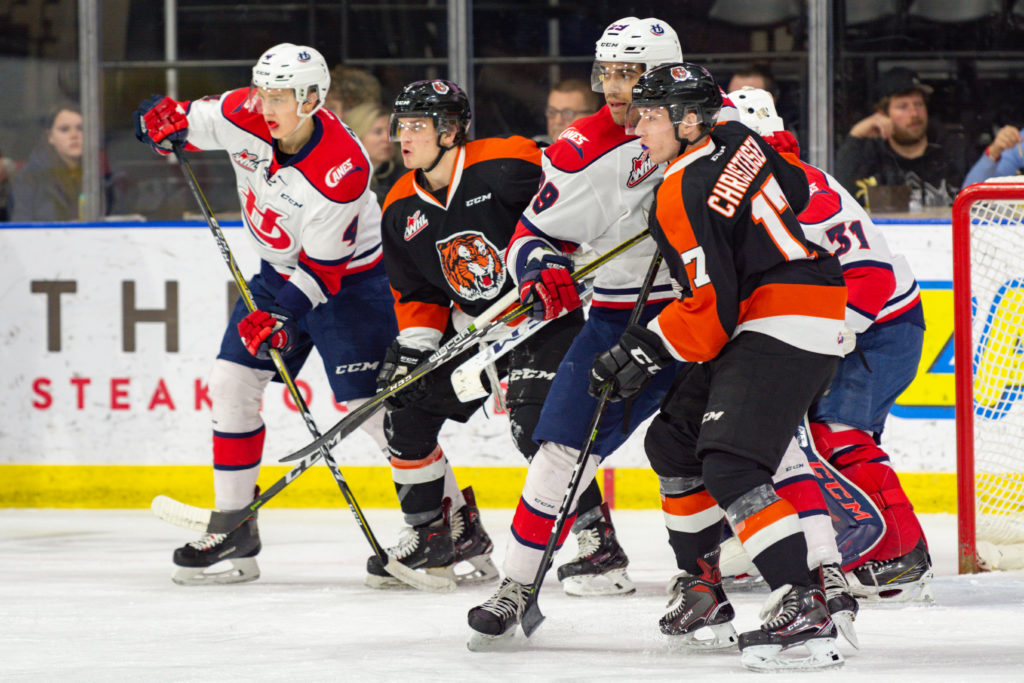 Lethbridge, AB – The Lethbridge Hurricanes ended a three-in-three weekend with a 5-4 shootout loss to the Medicine Hat Tigers on Sunday at the ENMAX Centre in the final game of 2018.

The Hurricanes had a good start to the game with some good chances early in the game to open the scoring but Tigers goaltender Jordan Hollett stood tall. Medicine Hat had some chances in the period, including two goal posts behind Reece Klassen but neither team found the net as it was scoreless after twenty minutes of play. The ‘Canes outshot the Tigers 16-9 in the period.

The teams found the net in the second period as both scored a pair. The Hurricanes opened the scoring at the 7:33 mark as Justin Hall banged home his second goal of the season from twin brother Adam and Keltie Jeri-Leon to make it 1-0 Lethbridge. Medicine Hat tied the game just 6:01 later as Ryan Jevne sniped home his 19th of the game right after a penalty expired for the Hurricanes as the game was tied 1-1. Lethbridge re-took the lead as Nick Henry extended his point-scoring streak to eight games as he redirected a Danila Palivko point shot by Hollett to make it 2-1; Koletrane Wilson picked up the second assist. Just over two minutes later though, the Tigers once again tied the game as Joel Craven had a shot deflect by Klassen as the game was tied 2-2 after two periods.

The Hurricanes pulled ahead once again early in the third period as Dylan Cozens scored his 21st goal of the season off the rush to put Lethbridge ahead 3-2; Jake Elmer and Nolan Jones earned the assists on the goal. Jake Leschyshyn ripped home his team-leading 24th goal of the year on a power play just 47 seconds after Cozens scored to put the ‘Canes ahead 4-2; Calen Addison and Jordy Bellerive earned the assists. The Tigers rallied scoring twice to force overtime as Craven snapped home his second of the game at 13:40 before Elijah Brown tied the game with a power play goal with 2:02 left in regulation.

In overtime, the Hurricanes were assessed a too-many men penalty resulting in a power play for the Tigers. Medicine Hat hit two goal posts as both Jevne and Hamblin hit metal but they could not solve Klassen. The game went to a shootout and in the fourth round, Jevne ended the game lifting the Tigers to the come-from-behind 5-4 shootout win.

The Hurricanes will begin the 2019 portion of their schedule on Wednesday when they travel to face the Red Deer Rebels at the ENMAX Centrium. The ‘Canes will return to the ENMAX Centre on Friday, January 4th when they host the Vancouver Giants at 7:00pm. Tickets can be purchased online at www.enmaxcentre.ca, by calling 403-329-SEAT (7328) or by visiting the ENMAX Centre Ticket Centre.