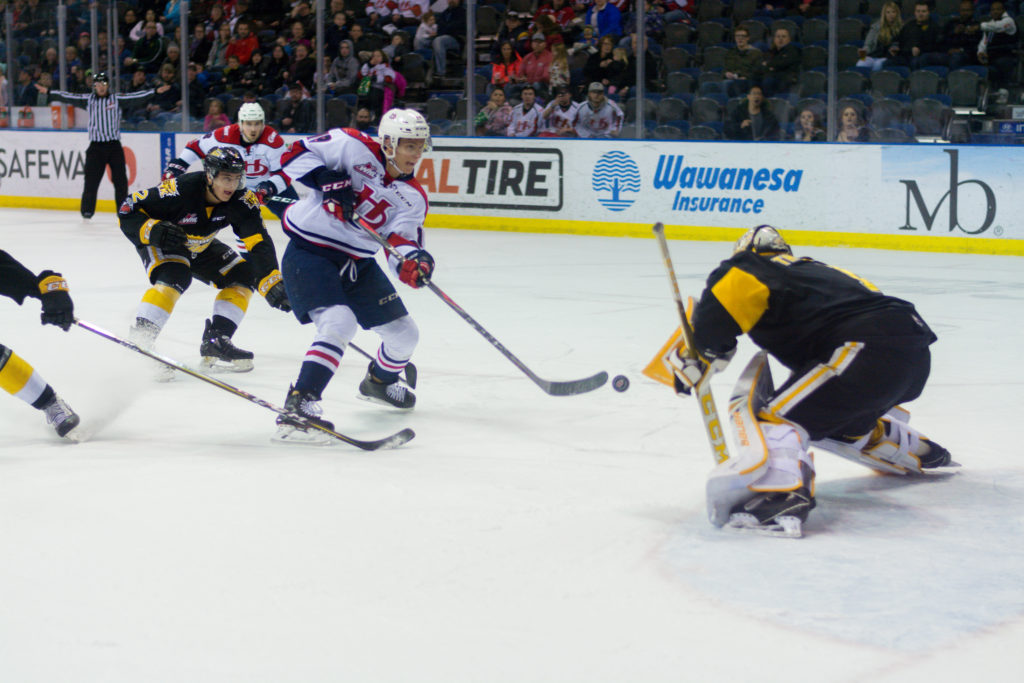 Brandon, MB – The Lethbridge Hurricanes looked to take a stranglehold on their second round series but it was the Brandon Wheat Kings that cut the ‘Canes series lead in half earning a 5-4 victory at Westoba Place on Tuesday night.

The Wheat Kings, who hadn’t played a playoff game in Brandon in nearly two years, had a good opening five minutes and opened the scoring at the 3:57 mark as Linden McCorrister snapped home his fifth of the playoffs to make it 1-0; Connor Gutenberg and Evan Weinger picked up the assists on the goal. The Hurricanes tied the game at the 16:08 mark as Logan Barlage scored his second of the playoffs from Zane Franklin and Egor Zudilov to make it 1-1. Brandon re-took the lead at the 18:51 mark as Ty Lewis scored a power play goal to give Brandon a 2-1 advantage after twenty minutes of play. Shots favoured the Hurricanes 18-15 in the first period.

The see-saw affair continued in the second period as Calen Addison scored to tie the game 2-2 just 2:54 into the middle frame on a pass from Owen Blocker. The tie lasted just 18 seconds as Brandon forged back ahead as Luka Burzan scored his first of two in the period to make it 3-2. Lethbridge once again tied the game 3-3 as Brad Morrison scored a four-on-three power play goal at the 9:12 mark; Taylor Ross and Jordy Bellerive picked up the assists. The Wheat Kings once again pulled ahead as Burzan scored his second at the 17:35 mark before Stelio Mattheos tallied with 45 second left in the middle frame as Brandon held a 5-3 lead after two periods of play. Brandon led the shots 15-12 in the second and were tied 30-30 after forty minutes.

In the third period, the Hurricanes kept taking penalties to put themselves down a man when they would generate some momentum. Brandon also took a pair of penalties and the Hurricanes made them pay as Morrison snapped home his second of the night and eighth of the playoffs to pull the ‘Canes to within one with 5:25 left in the game; Addison and Ross picked up the helpers. With under two minutes, the ‘Canes took another penalty resulting in a shorthanded situation. The ‘Canes pulled the netminder but couldn’t find a game-tying goal as the Wheat Kings hung on to a 5-4

Shots in the third period favoured the Wheat Kings 10-9 and 40-39 in the hockey game. The ‘Canes went 2/5 on the power play while Brandon was 1/6 with the extra man.

The win for the Wheat Kings cuts the Hurricanes series lead to 2-1 through three games and guarantees a Game 5 at the ENMAX Centre on Friday night. Tickets for Game 5 will go on sale on Wednesday morning at 9:00am and can be purchased online, by calling 403-329-SEAT (7328) or by visiting the ENMAX Centre Ticket Centre.

The Hurricanes and Wheat Kings will face off in Game 4 on Wednesday night at Westoba Place at 6:00pm. The game can be heard on 106.7 ROCK or watched at either Browns Socialhouse locations in Lethbridge.