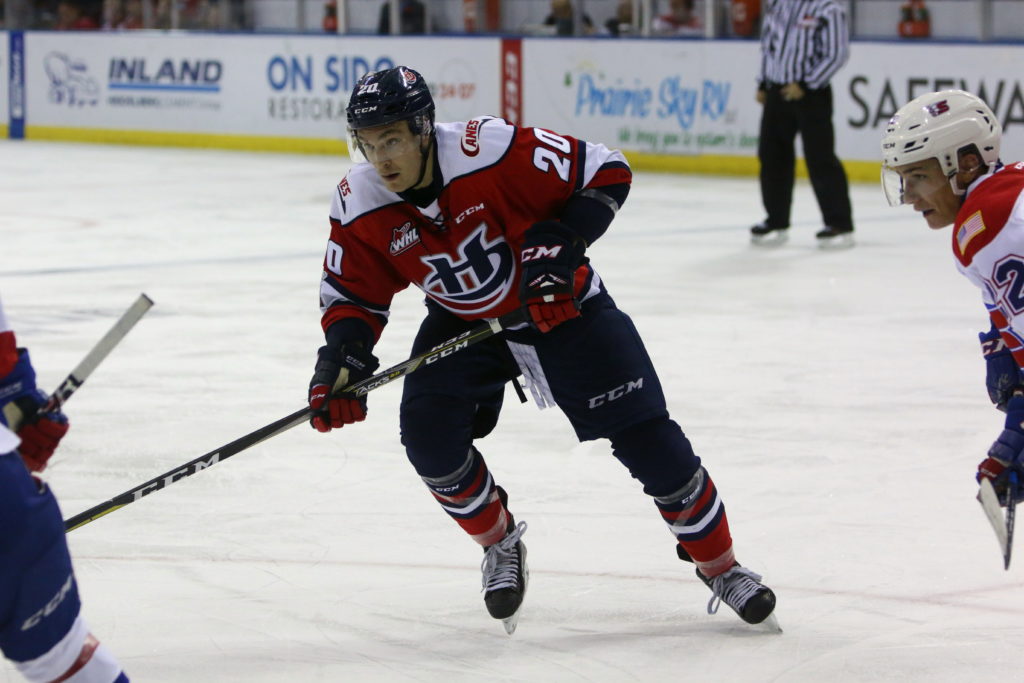 Spokane, WA – The Lethbridge Hurricanes continued a three-game road trip in Spokane against the Chiefs on Friday with a 6-2 loss to end their winning streak at four games.

The Chiefs opened the scoring on a power play just 4:34 into the game as Luc Smith buried his 10th of the season with the extra make to make it 1-0 Spokane; Eli Zummack and Ty Smith picked up the assists on the goal. Just 15 seconds later, the Chiefs struck again as Jake McGrew buried a back-door feed for his eighth of the season as Spokane held an early 2-0 lead. The ‘Canes and Chiefs exchanged chances through the rest of the period but neither team found the net as Spokane led 2-0 after twenty minutes. Shots were tied 9-9 in the first period.

Spokane had a power play to start the second period and struck with the man advantage as Luc Smith buried his second of the game to make it 3-0 just 1:16 into the middle frame. The Chiefs made it 4-0 as Riley Woods snapped home his 22nd of the season at the 4:05 mark when marked the end of the night of Hurricanes starter Carl Tetachuk as he was replaced by Reece Klassen who stopped all five shots he saw in the middle frame. Lethbridge got on the board at the 6:29 mark as Igor Merezhko powered home his first of the season, and first in 45 games, to make it a 4-1 game; Logan Barlage and Keltie Jeri-Leon picking up the assists on the goal. The ‘Canes cut the lead in half when Jackson Shepard banged home his second of the season on a power play to make it 4-2; Nick Henry and Calen Addison drew the assists on the goal as the ‘Canes trailed by a pair after forty minutes of play. The Hurricanes outshot the Chiefs 12-9 in the second period.

In the third period, the Chiefs would add to their lead as Woods would pot his second of the night and 23rd of the season at the 11:04 mark to make it 5-2 before Cordel Larson netted his fourth of the season on a wraparound with 2:27 remaining in the game as Spokane went on to the 6-2 win.

Shots in the third period favoured the Chiefs 11-9 while the ‘Canes held the edge 30-29 in the game. Lethbridge went 1/3 on the power play while Spokane was 3/4 with the extra man.

The loss for the Hurricanes ends a four game winning streak and was their first regulation loss in their last seven games having now posted a 6-1-1-0 record in their last eight games. The ‘Canes fall to 15-9-3-2 on the year.

The Hurricanes will wrap up their three-game on Saturday against the Tri-City Americans before they return to the ENMAX Centre on Wednesday, December 12th when they welcome the Kelowna Rockets. Tickets can be purchased online at www.enmaxcentre.ca, by calling 403-329-SEAT (7328) or by visiting the ENMAX Centre Ticket Centre.