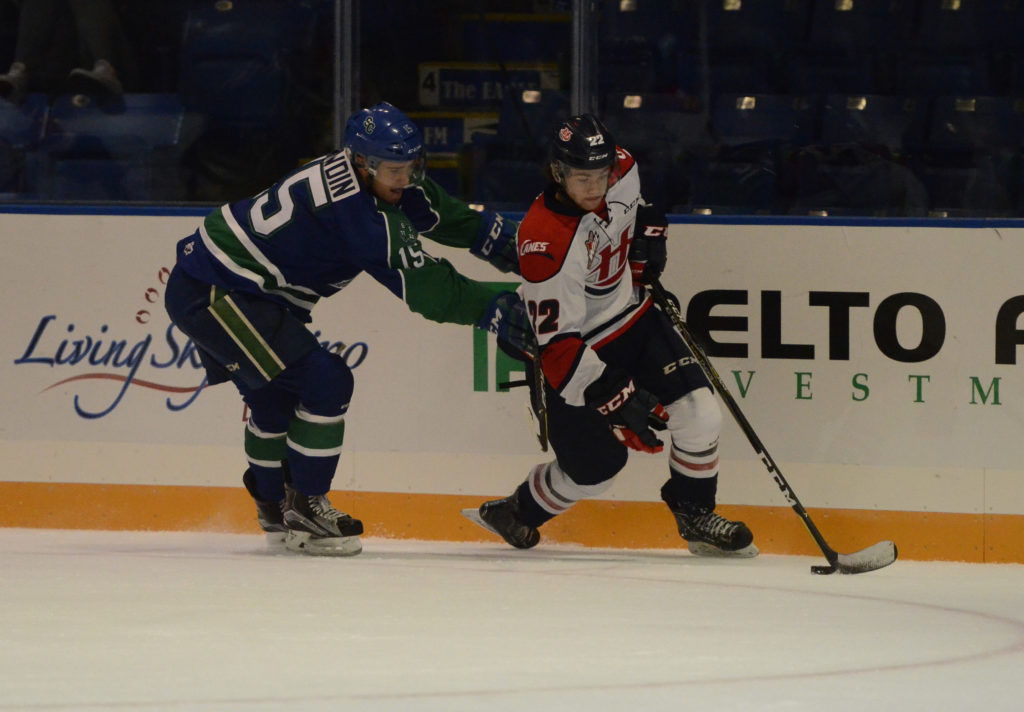 Swift Current, SK – The Lethbridge Hurricanes traveled to Swift Current in hopes of finding their first road victory of the season but a four goal third period helped the Broncos to a 6-2 win Tuesday night.

After the Hurricanes received Tanner Nagel back from injury on Friday night, the ‘Canes got more bodies back as both Jadon Joseph and Jake Elmer returned to the line-up.

It was a fast paced game from the drop of the puck as both teams pushed the pace early. It was a parade to the penalty box in the first period as a total of nine minor penalties were called. Swift Current opened the scoring at the 15:06 mark as Tyler Steenbergen scored his league-leading 14th goal of the season to make it 1-0. The Hurricanes equalized on a power play goal of their own as Giorgio Estephan beat Logan Flodell with a bullet to make it 1-1 at the 17:24 mark – Calen Addison and Jordy Bellerive picked up the assists as the game was tied 1-1 after twenty minutes of play. The ‘Canes outshot the Broncos 20-13 in the opening period.

The parade to the box continued in the second period as there was seven minor penalties were called. The Hurricanes carried the play in the middle frame and jumped out to a 2-1 lead as Addison beat Flodell high glove side on the power play – Estephan and Bellerive earned the assists. The Broncos, however, tied the game as Kaden Elder scored a short handed goal with 5:58 remaining in the middle frame as the game was tied 2-2 after forty. Lethbridge outshot Swift Current 18-6 in the second period.

Early in the third there was a delay to the game as a bulb went out in a panel of lights overlooking the ice surface. After the game was re-started, the Broncos pushed. Swift Current pulled ahead when Riley Stotts scored a power play goal to put the Broncos ahead 3-2. Just 1:50 later, Aleksi Heponiemi scored to make it 4-2 as he beat Stuart Skinner over the blocker. The Broncos made it 5-2 as Max Patterson knocked down a puck in mid-air before beating Skinner on the rebound. With 5:30 left in the game, the ‘Canes pulled the goaltender in hopes of generating a comeback but were unable to do so. Steenbergen added an empty net goal with 18.3 seconds left to make a 6-2 final.

The Broncos outshot the Hurricanes 16-9 in the third period, but the ‘Canes held the edge 47-35 in the game. Lethbridge went 2/7 with the power play while Swift Current was 2/9 with the extra man.

Three stars of the game were:

The loss drops the Hurricanes road record to 0-3-0-0 on the season while 3-3-0-0 overall. The ‘Canes kick off a stretch of eight of the next nine on home ice on Friday when they welcome the Everett Silvertips at 7:00pm.

Tickets for Friday’s game are available online, by calling (403) 329-SEAT (7328) or by visiting the ENMAX Centre Ticket Centre.