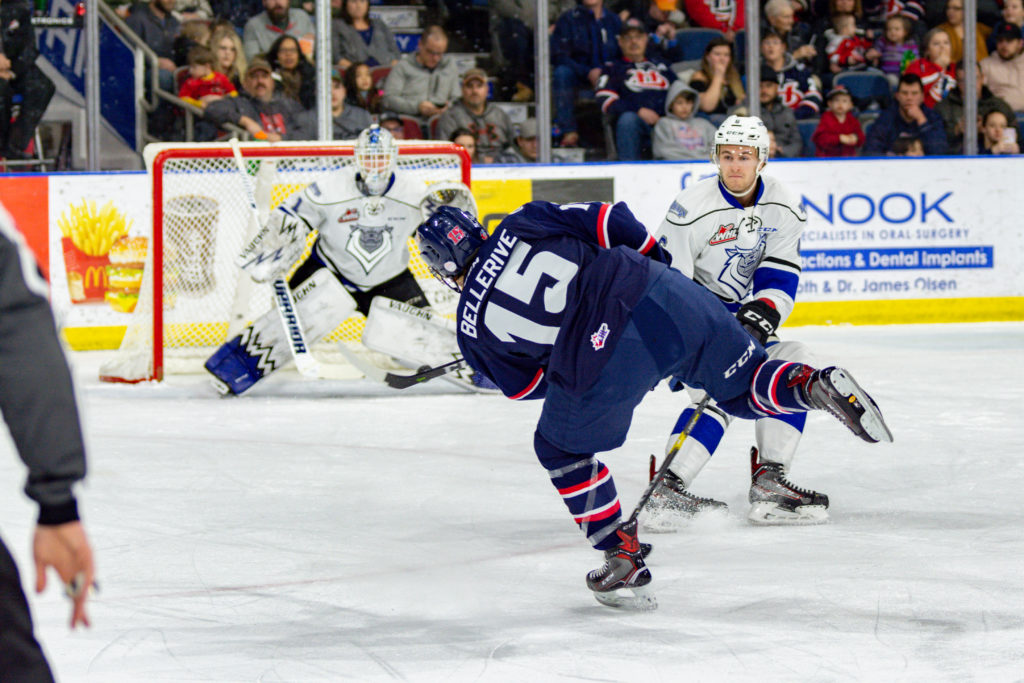 Lethbridge, AB – The Lethbridge Hurricanes returned to action on Friday as they were handed a 6-2 loss to the Victoria Royals at the ENMAX Centre in the first of a three-in-three weekend.

It wasn’t a great start for the Hurricanes to the game as Victoria struck just 3:08 into the game as Dante Hannoun scored to make it 1-0 Royals on the road. The Royals added to their lead at the 9:16 mark as Igor Martynov potted his fourth of the season on a power play from Kaid Oliver and Tarun Fizer to make it 2-0. Lethbridge responded to cut the lead in half as Jordy Bellerive ripped home his 17th goal of the season at the 12:11 mark; Nick Henry and Jake Leschyshyn earned the helpers as Victoria led 2-1 after twenty minutes of play.

Just 55 seconds into the second period, Hannoun scored his second of the game to make it 3-1 Royals. Victoria made it 4-1 with another power play goal at the 8:59 mark as Fizer scored on a broken play for his ninth of the season from Hannoun and Scott Walford. Hannoun completed his hat-trick at the 13:05 mark of the middle frame as he snuck a back-hand shot by Carl Tetachuk to make it 5-1. Lethbridge got one back as Calen Addison buried his fifth of the year with 3:37 left in the period to make it 5-2; Bellerive and Leschyshyn picked up the helpers as the ‘Canes trailed 5-2 after forty minutes.

Reece Klassen replaced Tetachuk to start the third period after Tetachuk allowed five goals on 22 shots through two periods. Klassen faced seven shots and allowed one goal as Hannoun potted his fourth tally of the night at the 15:35 mark to round out the scoring beating Klassen over the blocker to make it a 6-2 final.

Shots in the third period favoured the Hurricanes 14-7 and 32-29 in the game. Hurricanes went 0/3 on the power play and 2/4 on the man advantage.

The Hurricanes continue their three-in-three weekend on Saturday when they travel to face the Kootenay Ice before they return to the ENMAX Centre on Sunday to welcome the Medicine Hat Tigers. Tickets can be purchased online at www.enmaxcentre.ca, by calling 403-329-SEAT (7328) or by visiting the ENMAX Centre Ticket Centre.