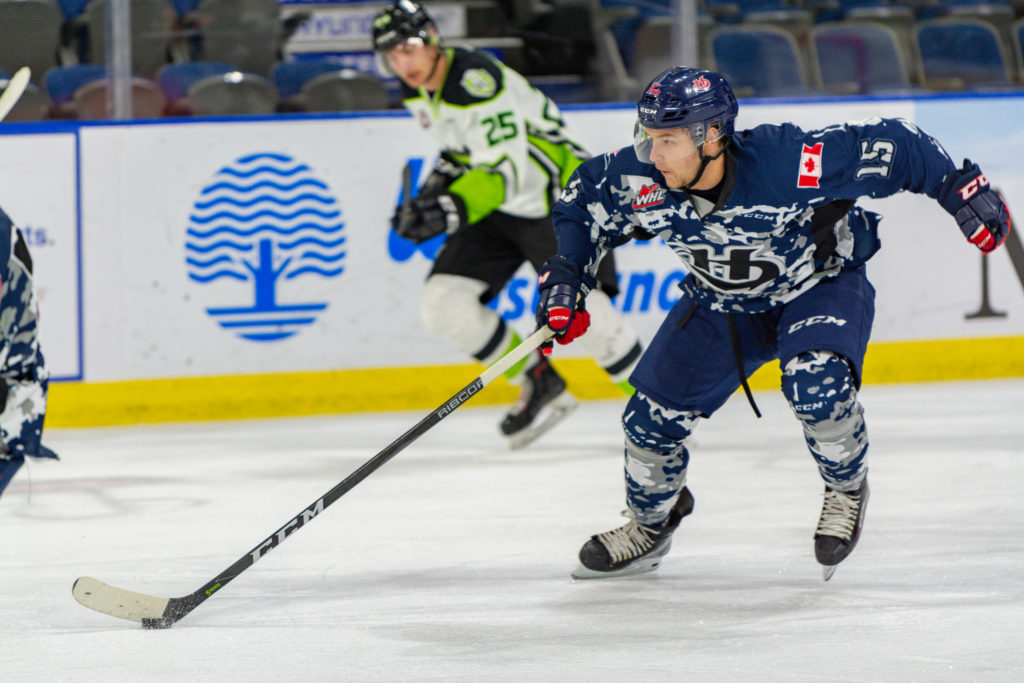 Lethbridge, AB – The Lethbridge Hurricanes continued a four-game home stand on Monday night as they welcomed the Edmonton Oil Kings on Military Appreciation Night and the Oil Kings took the first of two straight games between the two by a 6-4 score at the ENMAX Centre.

It was a quick start to the game for the Oil Kings who struck just 14 seconds into the game as Brett Kemp tapped home his 15th goal of the season; Vince Loschiavo and Trey Fix-Wolansky earned the assists on the goal. Lethbridge tied the game as Dylan Cozens rifled home his ninth of the season on a two-on-one to tie the game 1-1; Noah Boyko was credited with the lone assist on the goal. Edmonton re-took the lead just over three minutes later however as Liam Keeler potted his fourth of the campaign as the Oil Kings led 2-1 after twenty minutes of play. Edmonton held the edge in shots 10-8 in the first period.

The Hurricanes started the second period with a bang as Jordy Bellerive tied the game 2-2 with his ninth of the season just 1:18 into the period; Igor Merezhko and Alex Cotton picked up the assists on the goal. Edmonton pushed back with a shorthanded goal by Fix-Wolansky at the 7:19 mark to give the Oil Kings their third lead of the night making it 3-2 – it was the 10th shorthanded goal of the season surrendered by the Hurricanes. Edmonton potted a late power play goal with just 17.8 seconds left in the second period to make it 4-2 after two periods of play. The ‘Canes were outshot 10-4 in the middle frame.

The see-saw battled continued in the third period as Zach Cox netted his fifth of the season just 53 seconds into the period to pull the ‘Canes struck to make it a 4-3 hockey game; Taylor Ross and Bellerive earned the assists on the game. Oil Kings rebuilt their two-goal lead as Loschiavo buried his 10th of the season to make it 5-3. Cox tallied again for his second of the night and sixth of the season at the 11:16 mark to make it 5-4; Calen Addison and Merezhko earned the helpers on the goal. But, the Oil Kings once again restored their two-goal lead as Jalen Luypen finished a rebound passed Klassen to make it a 6-4 Friday.

Shots in the third period were tied 9-9 in the game, while the Oil Kings outshot the ‘Canes 29-21 in the game. Lethbridge went 0/3 on the power play while Edmonton went 1/3 with the extra man.

The loss was the Hurricanes first regulation loss on home ice in their last eight home games having posted a 5-1-2-0 record in those games. The defeat drops the ‘Canes overall record to 8-6-2-2 on the year.

The Hurricanes welcome the Edmonton Oil Kings again on Friday, November 16th at the ENMAX Centre at 7:00pm. Tickets are available online, by calling 403-329-SEAT (7328) or by visiting the ENMAX Centre and Yates Ticket Centre’s.