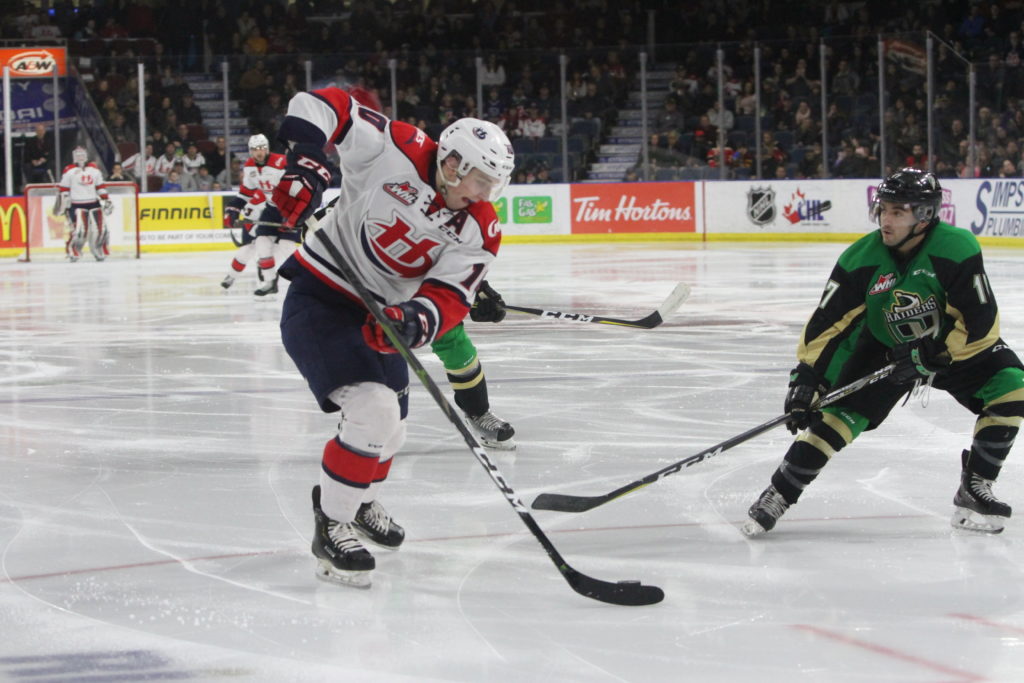 Lethbridge, AB – The Lethbridge Hurricanes played the second to last game on a season-long six-game homestand on Saturday as they were handed a 6-5 loss to the Prince Albert Raiders at the ENMAX Centre.

The Hurricanes had a good start to the game as it appeared that they opened the scoring as Jackson Shepard tipped home a puck in the opening minutes but the goal was disallowed due to goaltender interference. The ‘Canes eventually did open the scoring just a few minutes later as Jake Elmer finished a beautiful centering pass by Koletrane Wilson to make it 1-0; Ty Prefontaine earned the second assist on Elmer’s 22nd goal of the year. Raiders tied the game at the 12:40 mark as Eric Pearce banged home a loose puck to make it 1-1 after twenty minutes of play. The ‘Canes held the shot advantage 10-8 in the first period.

The flood gates opened in the second period as both teams struck for three. The Raiders pulled ahead just 1:48 into the middle frame on a power play goal by Parker Kelly to make it 2-1. Prince Albert made it 3-1 as Cole Fonstad beat Carl Tetachuk from well out to give the Raiders a two-goal lead 7:25 into the period. The ‘Canes pushed back and cut the lead to one as Ty Prefontaine scored his second of the season from Taylor Ross and Logan Barlage to make it 3-2. The ‘Canes tied the game as Igor Merezhko snapped home his fourth of the year at the 13:53 mark to make 3-3; Ross and Nick Henry earned the assists on the goal. Lethbridge pulled ahead as Jake Leschyshyn tucked home his team-leading 30th of the season making it 4-3; Henry and Dylan Cozens earned the helpers on the go-ahead goal. The lead lasted just over two minutes as Sean Montgomery tipped home his 22nd of the year with 1:10 left in the period as it was tied 4-4 after forty minutes. Prince Albert lead the shots 17-13 in the second frame.

In the third period, the Hurricanes once again pulled ahead on a shorthanded goal by Leschyshyn as he stole the puck away from the goaltender Boston Bilous behind the Raider goal before wrapping the puck into the empty net to make it 5-4 Lethbridge. The ‘Canes two more great chances on while shorthanded as Ross had a breakaway while Elmer hit a crossbar. Prince Albert tied the game on a power play goal by Ozzy Wiesblatt seconds after the Elmer crossbar to tie the game 5-5. The Raiders Fonstad struck for his second of the game at 13:23 mark to put Prince Albert ahead 6-5 and that would be the final.

The loss for the Hurricanes was their sixth straight defeat against the Raiders dating back to last season. It was the ‘Canes third straight loss as they fall to 2-1-1-1 on this six-game homestand. Lethbridge’s overall record slips to 27-16-5-5 on the season.

The Hurricanes will return to action on Wednesday when they wrap up a six-game homestand against the Calgary Hitmen at the ENMAX Centre at 7:00pm. Tickets can be purchased online at www.enmaxcentre.ca, by calling 403-329-SEAT (7328) or by visiting the ENMAX Centre Ticket Centre.