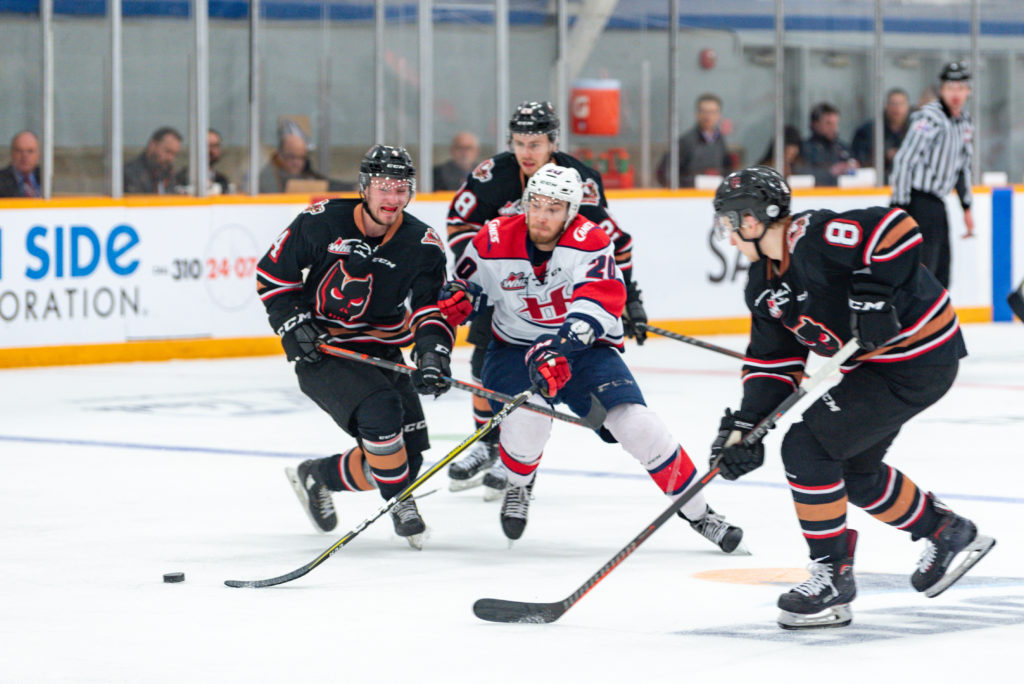 Lethbridge, AB – The Lethbridge Hurricanes season came to an end on Tuesday night with a 4-2 Game 7 loss to the Calgary Hitmen at Nicholas Sheran Arena.

It was a tough start for the Hurricanes who fell behind 3-0 in the first period. Calgary struck on a power play 3:30 into the hockey game as Carson Focht scored on a one-timer on a power play to give the Hitmen a 1-0 lead as they struck first for the sixth time in the season. Riley Fiddler-Schultz scored on an odd-man rush at the 15:23 mark to make it 2-0 before Focht potted his second of the period to give Calgary a 3-0 lead after twenty minutes. Hitmen outshot the Hurricanes 17-10 in the first period.

The Hurricanes pushed back in the second period as they got on the board early when Zach Cox sniped his second goal of the series just 2:49 into the middle frame to make it 3-1; Zack Stringer and Nolan Jones earned the assists on the goal. Just over ten minutes later, Alex Cotton scored his first WHL Playoff goal on a one-timer on a delayed penalty to make it 3-2; Jordy Bellerive and Jake Leschyshyn picked up the helpers on the goal as the ‘Canes trailed by one after forty minutes of play.

In the third period, the Hurricanes have countless chances to tie the game including a Taylor Ross chance at the side of the net. The ‘Canes outshot the Hitmen 9-5 in the final twenty minutes but could not solve goaltender Jack McNaughton. Calgary captain Mark Kastelic potted an empty-net goal with 19 seconds left in the game to make it a 4-2 final.

The Hurricanes and Hitmen tied in shots with 27 each. The ‘Canes went 0/2 on the power play while the Hitmen went 1/4 with the extra man.

Three stars of the game were the Hurricanes three overage players: Igor Merezhko, Jake Elmer and Taylor Ross, who played in their final junior game.

The elimination of the Hurricanes is the first time in three years that the ‘Canes were ousted in the first round of the WHL Playoffs.