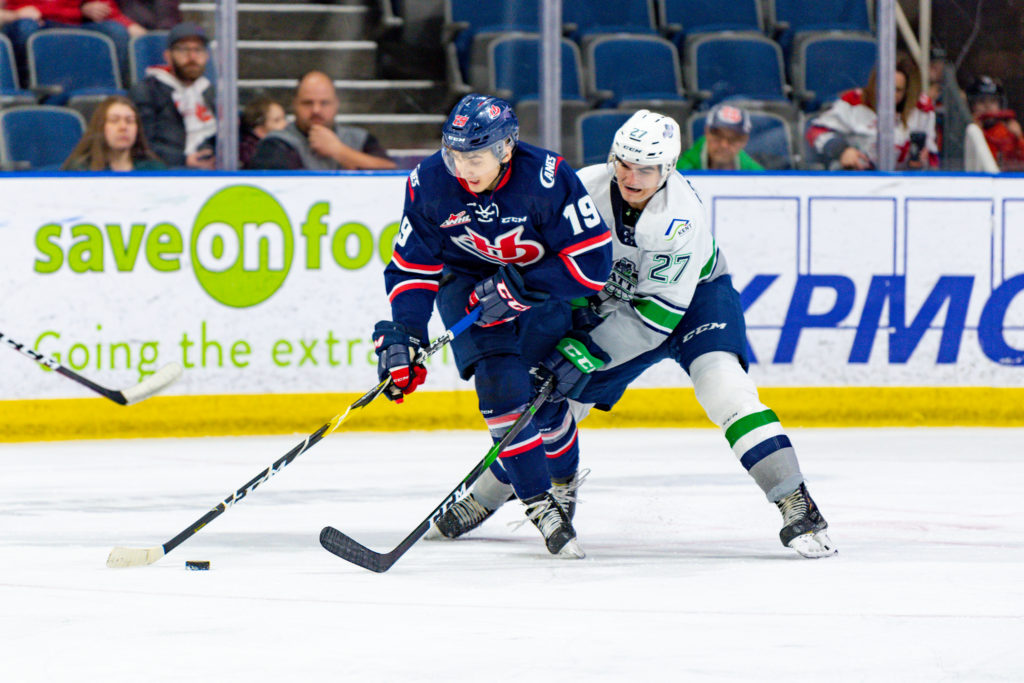 Lethbridge, AB – The Lethbridge Hurricanes opened the new year with a 5-4 overtime loss to the Seattle Thunderbirds on Friday at the ENMAX Centre.

The Hurricanes had a good start to the game as they pounced on the Thunderbirds right away taking an early 1-0 lead when Chase Wheatcroft extended his career-high scoring streak to four games when he slipped one through the legs of goaltender Roddy Ross 3:15 into the game; Koletrane Wilson and Justin Hall earned the assists on the goal as they extended their point-scoring streaks to five-straight contests. Seattle tied the game 1-1 with a power play goal by Henrik Rybinski at the 7:39 mark before the ‘Canes re-took the lead with a power play goal of their own when Zack Stringer was able to slap a bouncing puck home for his fifth of the season; Wilson and Wheatcroft earned the helpers on the goal. Before the period was out, the Thunderbirds tied the game again as Conner Bruggen-Cate ripped one over the glove of Bryan Thomson to make it a 2-2 game after twenty minutes of play. Shots were even 10-10 in the opening frame.

Early in the second period former Hurricanes – now Thunderbird – Keltie Jeri-Leon ripped home his team-leading 13th goal of the season at the 3:14 mark to put Seattle ahead 3-2 early in the middle stanza. The ‘Canes tied the game at 3-3 when Hall banked home his 10th goal of the season off a Seattle defender at the 12:13 mark. Lethbridge pulled ahead with a five-on-three power play goal when Logan Barlage beat a screened Ross to make it 4-3 Hurricanes after forty minutes; Hall and Alex Cotton earned the assists on the goal. Lethbridge outshot Seattle 11-6 in the middle stanza.

In the third period, the Thunderbirds pushed and would tie the game when Max Patterson beat Thomson from a sharp angle to even the score at 4-4 with 7:50 remaining in regulation. The ‘Canes and T-Birds each had chances to pull ahead but both goaltenders stood tall as the game went to overtime. In the extra session, Seattle would generate the game-winning goal when Rybinski found Payton Mount in the slot and he ripped home his ninth goal of the season to win the game 5-4.

Seattle had the only two shots in the overtime period as they outshot Lethbridge 30-29 in the hockey game. The ‘Canes went 2/6 on the power play while the Thunderbirds were 1/4 with the extra man.

The defeat for the Hurricanes ends a three-game winning streak, though extends their point streak to four straight games as they are now 3-0-1-0 in their last four outings. The ‘Canes four-game home winning streak comes to an end as well as Lethbridge falls to 24-10-1-5 on the season.

The Hurricanes welcome the Calgary Hitmen on Saturday, January 4th to the ENMAX Centre at 7:00pm. Tickets can be purchased online at www.enmaxcentre.ca, by calling 403-329-SEAT (7328) or by visiting the ENMAX Centre Ticket Centre.