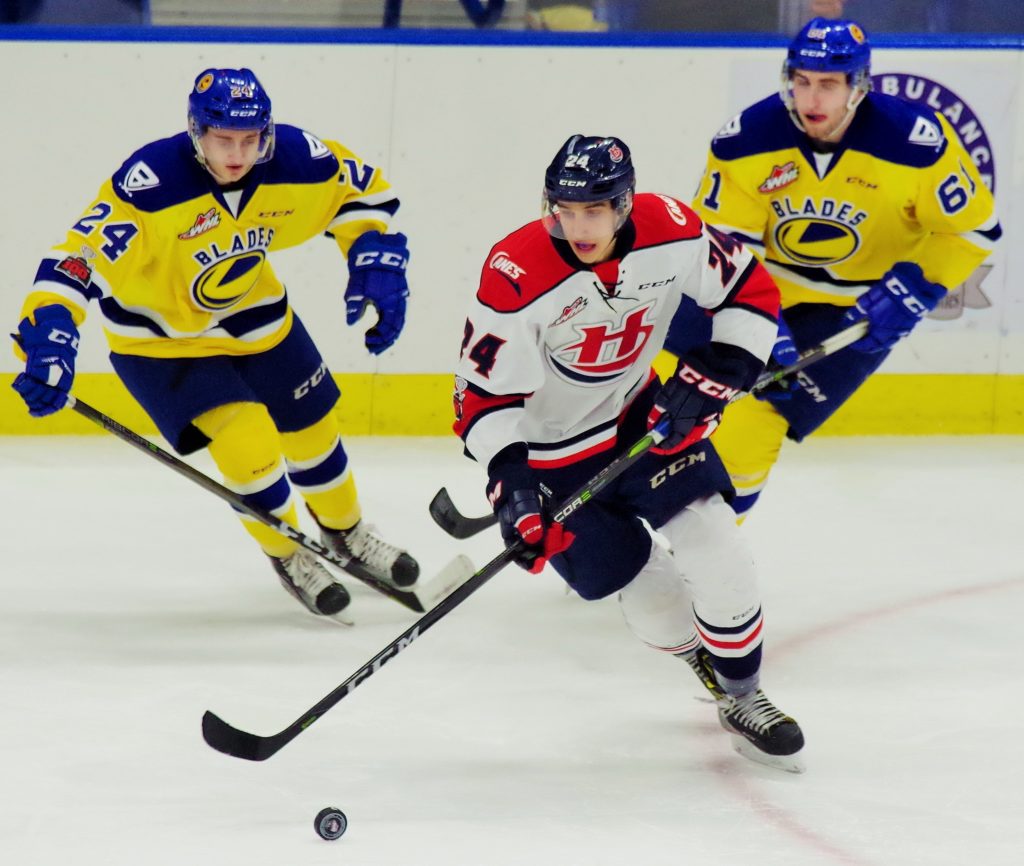 Saskatoon, SK – The Lethbridge Hurricanes began a four game in five night East Division road trip on Tuesday in Saskatoon with a 5-3 loss to the Blades.

The Hurricanes started the game with some jump as they outskated the Blades in the first three minutes and were awarded a power play opportunity because of it. The ‘Canes failed to capitalize with the man advantage and quickly after the Blades penalty expired Saskatoon was able to open the scoring as Bradly Goethals banged home a rebound to make it 1-0 Blades just 4:39 into the game. With a power play, the Blades made it 2-0 as Cameron Hebig buried his 25th of the season on a cross-ice pass from Kirby Dach. Just 51 seconds later, the Blades struck again as Josh Paterson scored his 10th of the year to make tit 3-0 after twenty minutes of play. Saskatoon outshot the ‘Canes 15-6 in the first period.

The ‘Canes were much better in the second period as they directed 15 shots on Blades goaltender Nolan Maier; Blades also had 15 shots on goal. The Hurricanes got on the board as Dylan Cozens snapped home his ninth of the season on a two-on-one just 2:52 into the middle frame; Taylor Ross picked up the lone assist to extend his personal point scoring streak to four games. Another power play goal by the Blades put them back ahead by three as Kirby Dach made it 4-1. Before the period was out, the ‘Canes pulled back within two as Calen Addison rifled home his seventh of the season to make it 4-2 Saskatoon; Jake Elmer and Jadon Joseph earned the assists as the ‘Canes trailed by two after two periods.

The Hurricanes pulled within one early in the third period as Elmer was able to bang home a rebound just 3:57 into the frame as the Blades held just a 4-3 lead; Ty Prefontaine and Cozens picked up the assists on the goal. The Hurricanes continued to push but couldn’t solve Maier. The Blades put the game away as Hebig notched his second of the night with 4:35 left in the game on a tic-tac-toe passing play to make it a 5-3 final.

The Hurricanes and Blades each had 12 shots in the third period but it was Saskatoon with the edge 42-33 in the game. The ‘Canes went 0/4 on the power play while the Blades were 2/6 with the extra man.

The loss for the Hurricanes was their second straight setback and dropped their record to 14-14-2-0 on the season. It also put an end to the ‘Canes four game road winning streak as they are now 5-8-0-0 away from home. It was the ‘Canes first loss in Saskatoon since January 14, 2014.

The Hurricanes continue their East Division trip on Wednesday when they travel to face the Prince Albert Raiders at the Art Hauser Centre. You can listen on 106.7 ROCK beginning at 5:45pm with the pregame show.