Hurricanes Get By Hitmen 6-4 on Sunday 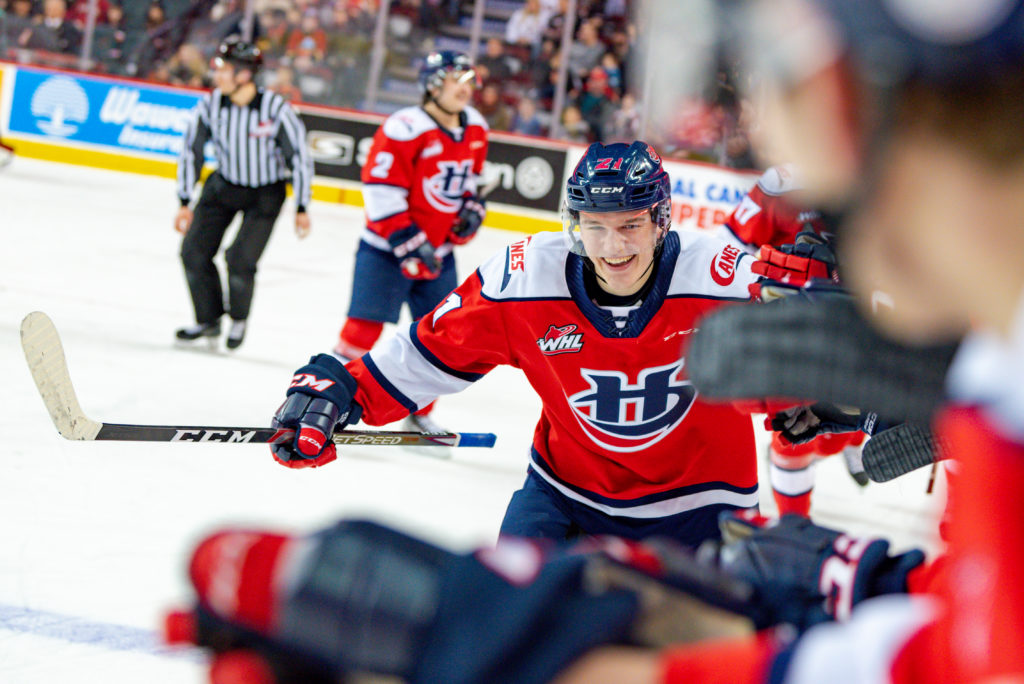 Calgary, AB – The Lethbridge Hurricanes earned their fourth straight win on Sunday afternoon with a 6-4 victory over the Calgary Hitmen at Scotiabank Saddledome.

It was an excellent start for the Hurricanes who controlled the play in the first period. The ‘Canes opened the scoring at the 9:14 mark as Calen Addison buried a slapshot from the blue line for his 10th of the season to make it 1-0; Chase Wheatcroft and Dylan Cozens earned the assists. Lethbridge doubled their lead as Oliver Okuliar rifled one over the glove of Brayden Peters on a power play to make it 2-0; Cozens and Alex Cotton the helpers. Calgary had just one shot on goal in the period until the final two minutes where they got four shots on a late period powerplay. The Hitmen struck on the man advantage as Jett Woo one-timed home his seventh of the season with just 10.3 seconds left in the period beating Bryan Thomson on a back-door chance to make it a 2-1 lead for the ‘Canes after twenty minutes of play. Hurricanes led the shots 12-5 in the first period.

The Hitmen pushed back in the second period after scoring late in the first. Calgary outshot Lethbridge 15-8 in the middle frame but it was the ‘Canes that did the scoring. Lethbridge restored their two-goal lead on a goal by Cotton – his 17th of the season – to make it 3-1 for the Hurricanes; Justin Hall earned the lone assist on the goal. The ‘Canes quickly added another as Ty Nash scored his fourth goal of the season on a breakaway to make it 4-1; Ty Prefontaine earned the lone assist on the goal extending his point-scoring streak to four straight games as the ‘Canes led by three after forty minutes of play.

Calgary played a strong third period as they cut the Hurricanes lead in half 5:59 in to make it 4-2 as Carson Focht snapped one home off the rush on a power play. The Hitmen continued to push back and they clawed to within a goal as Mark Kastelic snuck one by Bryan Thomson to make it 4-3 while four-on-four. Kastelic then tied the game less than two minutes later with his second of the period and 26th of the season to tie the game 4-4 just 11:23 into the third period. However, the Hurricanes answered back just 1:40 later as Logan Barlage centered to Brett Davis who buried his 17th goal of the season to make it 5-4. Calgary called a 30-second time-out and pulled the goaltender but the ‘Canes iced the win when Zack Stringer potted his eighth goal of the season to make it a 6-4 final.

Shots in the third period favoured the Hitmen 17-5 as they outshot the Hurricanes 37-25 in the game. Lethbridge went 1/4 on the power play while Calgary was 2/3 with the extra man.

The win for the Hurricanes was their fourth straight victory as they improve their WHL-leading road record to 19-7-0-1 on the year. The win improves their overall record to 33-12-2-5 on the season as they have now won three straight games on the road while going 5-1-0-0 in their last six away from home.

The ‘Canes build their lead on the Medicine Hat Tigers to four points for second in the Central Division – both teams have played 52 games on the season – while the Hurricanes trail the Edmonton Oil Kings by just six points for the division lead. Lethbridge is now just six points away from mathematically clinching a playoff spot.

The Hurricanes return to the ENMAX Centre next weekend for a pair of games against the Winnipeg ICE on Friday and Saturday, both games at 7:00pm. Tickets can be purchased online at www.enmaxcentre.ca, by calling 403-329-SEAT (7328) or by visiting the ENMAX Centre Ticket Centre.