Hurricanes Get By Rebels in Overtime 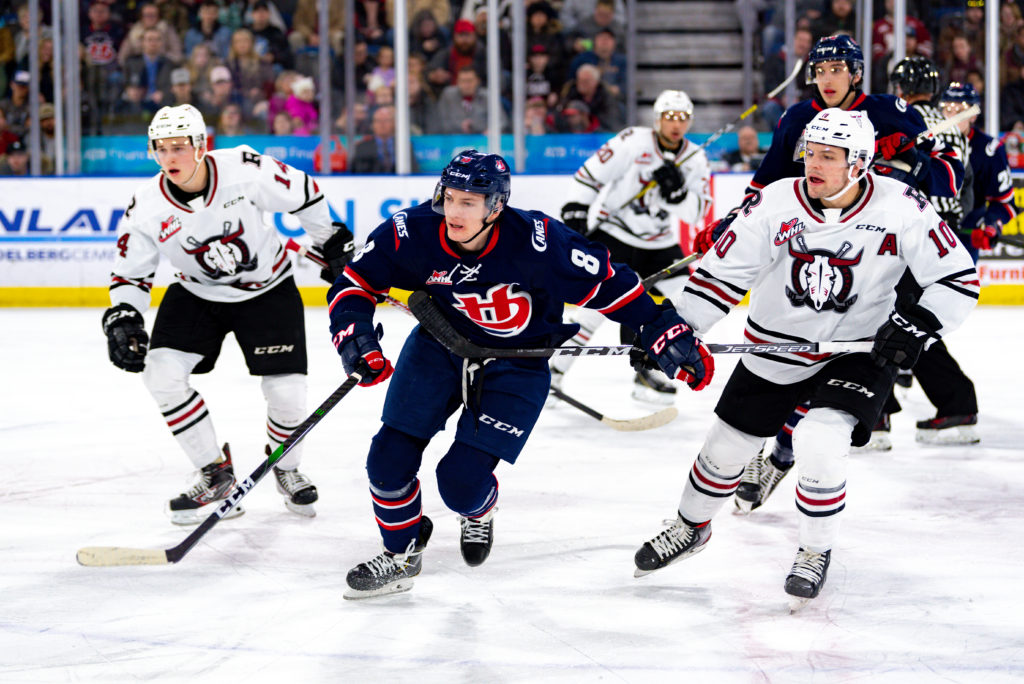 Lethbridge, AB – The Lethbridge Hurricanes played their final home game in January on Friday as they earned a 4-3 overtime victory over the Red Deer Rebels at the ENMAX Centre.

Prior to the game, the Hurricanes organization honoured Calen Addison and Dylan Cozens who returned to the ‘Canes line-up after capturing gold at the 2020 IIHF World Junior Championship in the Czech Republic. The Hurricanes fed off the energy in the jam-packed ENMAX Centre early in the game as they had a few good scoring chances early but couldn’t open the scoring despite having a power play opportunity. Red Deer opened the scoring at the 12:22 mark when Cameron Hausinger banked one off a ‘Canes defenseman to make it 1-0 for the Rebels. The ‘Canes tied the game when Brett Davis scored his third since joining the Hurricanes via trade tying the game 1-1 against his former team; Danila Palivko and Calen Addison drew the assists on the goal. The Rebels held the edge in shots 15-9 in the period.

Red Deer once again pulled ahead in the second period as Jayden Grubbe beat Bryan Thomson over the glove on an odd-man rush while on a power play to put the Rebels up 2-1 just 6:44 into the middle frame. Less than three minutes later, the ‘Canes tied the game as Addison ripped home his eighth goal of the season to make it a 2-2 hockey game; Palivko Davis earned the assists on the tying goal. Before the period was out, the ‘Canes pulled ahead as Ty Prefontaine – who was named a co-captain with Dylan Cozens earlier in the day – snapped home his second of the season ending a 34-game goal drought to make it 3-2 Lethbridge; Cozens and Oliver Okuliar assisted on the goal as the ‘Canes led after forty minutes.

In the third period, the Hurricanes dominated the Rebels as they outshot Red Deer 14-5 in the third period. The ‘Canes peppered Byron Fancy but he turned aside every shot the ‘Canes had in the final frame. Red Deer pulled even at the 6:23 mark when former Hurricanes Josh Tarzwell snapped home his 20th goal of the season to tie the game 3-3. Lethbridge continued to look for a go-ahead goal but couldn’t as the game went to overtime.

In the extra session, the Hurricanes outshot the Rebels 3-1 and won the game at the 1:52 mark as Alex Cotton scored his fourth game-winning goal of the season to lift the ‘Canes to the victory; Oliver Okuliar was credited with the lone assist as he extended his point-scoring streak to 10-straight games.

The win for the Hurricanes extends their point streak to eight straight games as they have posted a 6-0-2-0 record in that span. Lethbridge improved to 9-1-2-0 in their last 12 games while lifting their overall record to 26-10-2-5 on the season as they leapfrogged the idle Medicine Hat Tigers for second in the Central Division.

The Hurricanes begin a stretch of seven straight games on the road on Saturday as they travel to face the Medicine Hat Tigers at the Canalta Centre at 7:30pm. The ‘Canes will be back at the ENMAX Centre on Saturday, February 8th when they welcome the Prince Albert Raiders. Tickets can be purchased online at www.enmaxcentre.ca, by calling 403-329-SEAT (7328) or by visiting the ENMAX Centre Ticket Centre.