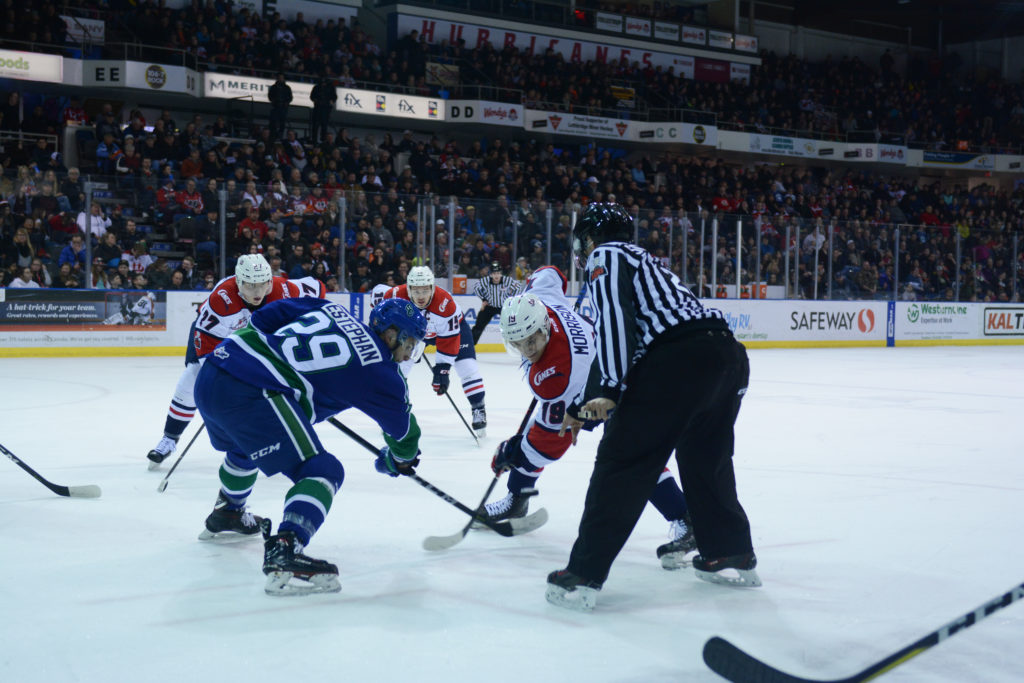 Lethbridge, AB – The Lethbridge Hurricanes won their second straight game on Friday as they defeated the Swift Current Broncos 5-2 in from of 4,893 at the ENMAX Centre.

It was an emotional night at the ENMAX Centre as it was the return of Tanner Nagel, Giorgio Estephan and Stuart Skinner after a January 9th trade to the Broncos. It was also the first game against Swift Current for Matthew Stanley, Logan Barlage, Logan Flodell and Owen Blocker.

The Hurricanes came shooting out of the gate to open the game peppering Skinner in the Swift Current crease. The ‘Canes solved Skinner early as Igor Merezhko leaned into his fifth of the season to make it 1-0 Lethbridge just 5:40 into the game. Lethbridge added to their lead late in the period as Jordy Bellerive one-timed home his team-leading 34th goal of the season on a power play to make it 2-0; the goal on the man advantage snapped and 0 for 27 stretch where the ‘Canes power play hadn’t scored in nine straight games. The Hurricanes outshot the Broncos 18-6 in the first period.

It didn’t take long for the Hurricanes to continue the momentum in the second period as Tate Olson snapped home his second goal of the season, again on the power play, just 3:27 into the middle frame to make it 3-0. The ‘Canes added another power play goal when Keltie Jeri-Leon netted his sixth of the year with 3:58 left in the middle frame to give Lethbridge a convincing 4-0 advantage after forty minutes of play. The Broncos outshot the ‘Canes 13-10 in the second period.

Swift Current turned their game on in the third period as they outshot the Hurricanes by a lopsided 23-8 in the final twenty minutes. The Broncos got on the board as Estephan buried his 24th of the season beating Logan Flodell over the blocker to make it a 4-1 hockey game. Broncos continued to press and scored another as Glenn Gawdin redirected a Colby Sissons point-shot for his 41st of the season with 3:35 left in the game to make it 4-2; Estephan earned the second assist on the goal. The ‘Canes would add an empty-net goal to make it a 5-2 final as Ty Prefontaine scored his fourth of the season with two minutes left in the game.

The Hurricanes were outshot 42-36 in the game. Lethbridge was 3/5 on the power play while they were 2/3 on the penalty kill.

The ‘Canes are back in action Saturday as they welcome the Edmonton Oil Kings at the ENMAX Centre at 7:00pm. Tickets are available by calling 403-329-SEAT (7328) or by visiting the ENMAX Centre Ticket Centre.