Hurricanes Head Into Break With 6-4 Win in Calgary 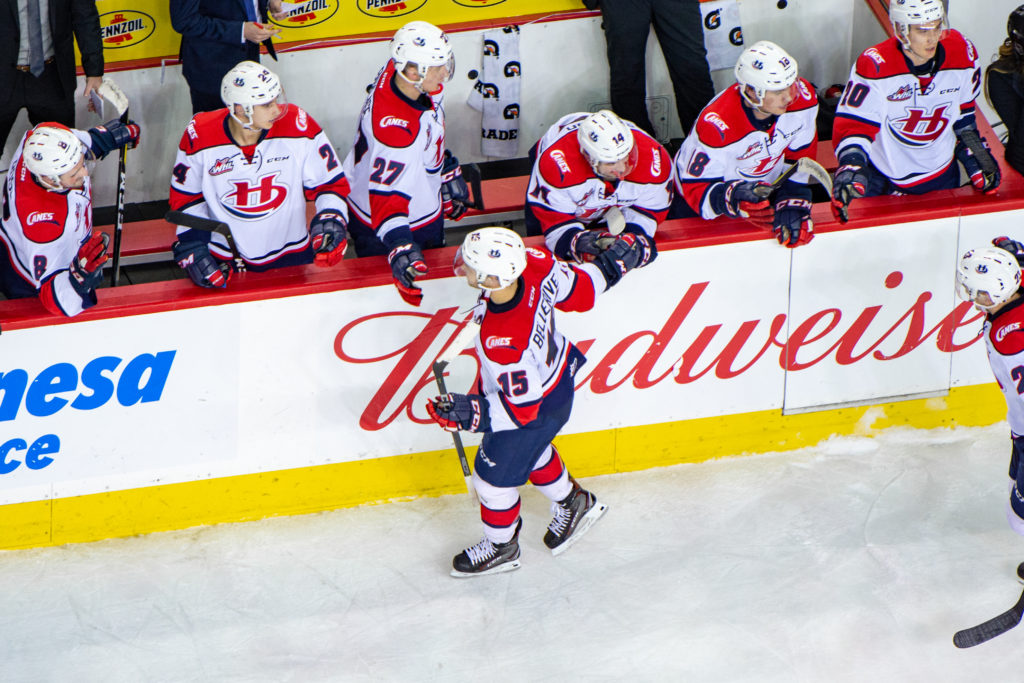 Calgary, AB – The Lethbridge Hurricanes played their final game of the first-half of the season Sunday afternoon in Calgary as they earned a 6-4 victory over the Hitmen at Scotiabank Saddledome.

The Hurricanes had a great start as is took them all of nine seconds to strike as Dylan Cozens forcing a steal and centered to Taylor Ross who tipped home his 20th goal of the season to make it 1-0 Lethbridge right away. The assist for Cozens was his 100th career WHL point while Ross reaches the 20-goal plateau for the second straight season. Calgary had their chances to tie, including a pair of power plays, but Carl Tetachuk stood tall stopping all 10 shots he faced in the game. Hurricanes had six shots in the game.

In the second period, the Hitmen tied the game just 2:09 into the stanza as Mark Kastelic snapped home his 23rd goal of the year to make it a 1-1 tie. Calgary pulled ahead at the 8:33 mark when Bryce Bader banked one in off of Calen Addison to make it a 2-1 Hitmen lead. The Hurricanes answered with a power play goal as Jordy Bellerive ripped home his 15th goal of the season to make it 2-2; Jake Leschyshyn and Addison earned the helpers on the goal. Just over two minutes later though, the Hitmen restored their lead with a power play goal of their own as Kaden Elder tipped home his 14th to give Calgary a 3-2 lead after forty minutes of play. Shots were even 11-11 in the middle frame.

The Hurricanes once again tied the game as Cozens scored his 18th goal of the year to make it 3-3 just 5:29 into the final frame; Addison earned the lone assist on the goal. Calgary pulled back ahead on a goal by Riley Stotts who back-handed home his 10th of the year to make it 4-3 but just 24 seconds later Ty Prefontaine scored his first of the season ending a 44-game goalless drought to make it 4-4; Nick Henry and Bellerive picked up the assists on the goal. Just one minute after Prefontaine scored, Logan Barlage rifled home his 12th of the season to put the ‘Canes ahead 5-4 with 10:11 left in the game; Alex Cotton earned the lone helper on the goal. The Hurricanes rounded out the scoring with 1:07 left as Henry centered to Bellerive who snapped home his second goal of the game, 16th of the season and 100th of his career to make it a 6-4 final.

For Bellerive, he becomes the 16th player in franchise history to reach the 100-goal plateau as he is now tied with Mark Greig for 15th all-time in franchise goal scoring.

The Hurricanes outshot the Hitmen 9-7 in the third period, but were outshot 28-26 in the game. The ‘Canes went 1/3 on the power play while the Hitmen went 1/4 with the extra man.

The win for the Hurricanes was their third straight and improved their record to 9-1-2-0 in their last 12 games heading into the Christmas break. The Hurricanes improved to 18-9-4-2 on the season and sit tied atop the Central Division with the Red Deer Rebels with 42 points.

The Hurricanes will be back at the ENMAX Centre on Friday, December 28th when they welcome they Victoria Royals. Tickets can be purchased online at www.enmaxcentre.ca, by calling 403-329-SEAT (7328) or by visiting the ENMAX Centre Ticket Centre.