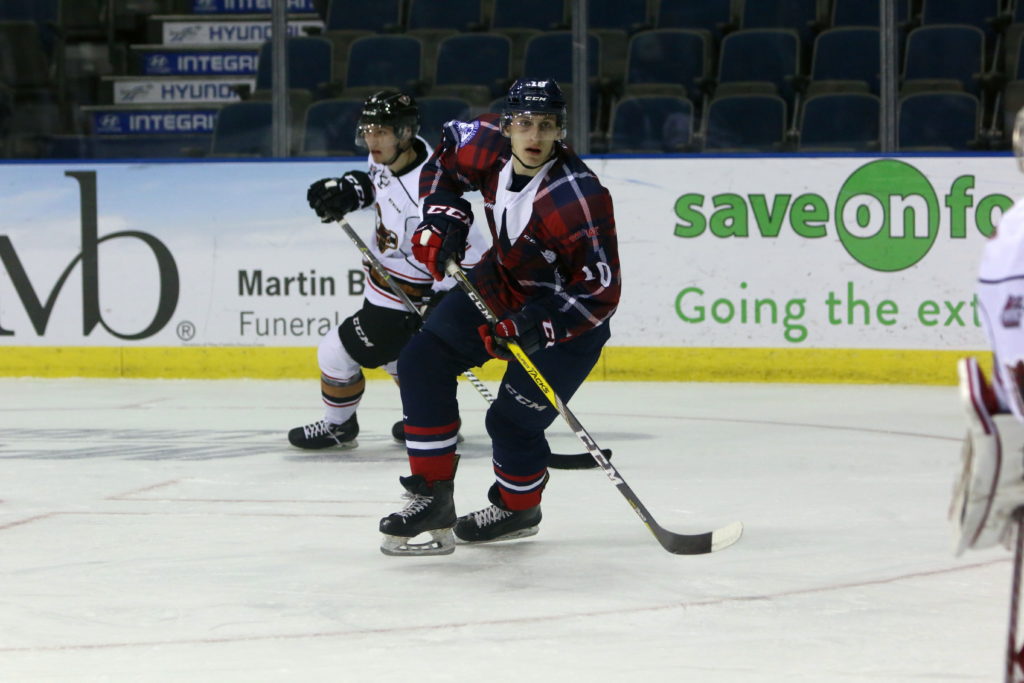 Lethbridge, AB – The Lethbridge Hurricanes reached the midway point of their season-long seven game home-stand on Friday as they welcomed the Calgary Hitmen on ‘WHL Suits Up with Don Cherry to Promote Organ Donation – Presented by RE/MAX’ Night and the ‘Canes earned a 5-4 win.

It was a furious first period that saw a total of six goals scored between the two teams. The ‘Canes opened the scoring as Egor Zudilov redirected a Brady Pouteau point shot passed Calgary’s goalie Matthew Armitage 2:46 into the game to make it 1-0 Lethbridge. The Hitmen answered back with a pair of power play goals in a two minute span to take the lead as first Vladislav Yeryomenko scored his second at the 8:45 mark before Matteo Gennaro potted his ninth of the year to make it 2-1 Calgary. The ‘Canes responded to tie the game as Jordy Bellerive sniped home his seventh to tie it 2-2. Gennaro struck again to put Calgary ahead but 32 seconds later Calen Addison rifled home his third to tie the game 3-3; Tate Olson picked up his first point as a Hurricane on the goal. Hurricanes were outshot 13-10 in the opening period.

The Hurricanes broke the deadlock at the 8:02 mark as Zudilov potted his second goal of the night on a breakaway beating Armitage over the blocker to make it a 4-3 ‘Cane lead – Jake Elmer picked up the lone assist on the goal. The Hitmen tied the game as Andrei Grishakov banged home a loose puck passed Stuart Skinner as the game was tied 4-4. The ‘Canes though pulled back ahead as Ryan Vandervlis potted a rebound for his third goal in as many games propelling the ‘Canes to a 5-4 victory.

The Hurricanes have now won three straight games as they improved their home-ice record to 6-2-0-0 on the season. The ‘Canes are now 7-5-0-0 overall on the year.

The Hurricanes continue their home-stand on Sunday when the defending WHL Champion Seattle Thunderbirds make their lone visit of the season to the ENMAX Centre at 6:00pm. Tickets for Sunday’s game are available online, by calling 403-329-SEAT (7328) or by visiting the ENMAX Centre Ticket Centre.