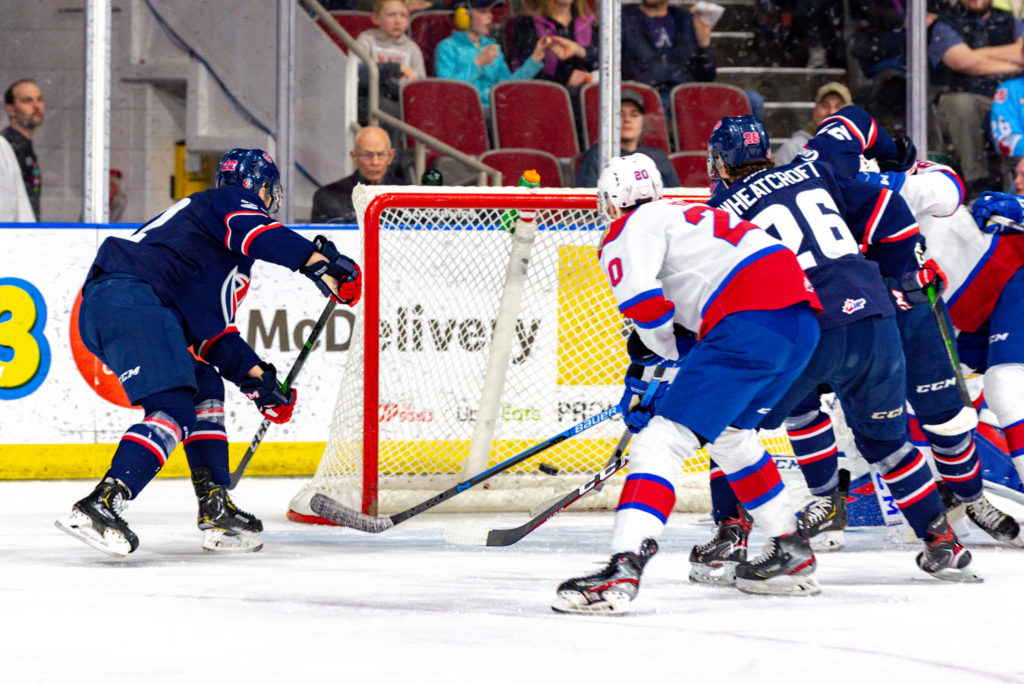 Lethbridge, AB – The Lethbridge Hurricanes won their second straight game on Friday with a thrilling 5-4 shootout win over the Edmonton Oil Kings at the ENMAX Centre in front of 5,227 fans.

It was a fast-paced first period that saw the teams tied 1-1 after twenty minutes of play. The Oil Kings had a strong start to the contest outshooting the ‘Canes 3-0 in the opening three minutes. Lethbridge pushed back and would open the scoring at the 11:29 as Brett Davis scored his 15th goal in 15 games with the ‘Canes to make it 1-0; Chase Wheatcroft and Alex Cotton earned the assists on the goal which extended Davis’ goal-scoring streak to four-straight games. Late in the period, Edmonton tied the game on a bullet by Wyatt McLeod with just 15 seconds left in the period. Lethbridge outshot Edmonton 13-8 into the first period.

The Oil Kings broke a 1-1 tie early in the second period as Ethan McIndoe scored his 16th goal of the season just 3:49 into the middle frame with a power play goal as Edmonton lead 2-1. The Hurricanes, who only allowed six shots in the middle frame, scored a power play goal of their own as Dylan Cozens skated the length of the ice before deking to the backhand and slipping one under Beck Warm to make it a 2-2 game; Davis and Calen Addison picked up the assists on the game-tying goal as it was even after forty minutes.

Early into the third period, the Oil Kings once again pulled ahead as Jake Neighbours struck just 20 seconds into the period to give Edmonton a 3-2 lead. The ‘Canes tied the game as Davis deflected a Cotton point-shot by Warm to tie the game with his 25th goal of the year. Late in the third period, Edmonton retook the lead when Vladimir Alistrov scored an unassisted goal with 2:57 left in regulation to make it 4-3 for the Oil Kings. In the final minute, the Hurricanes pulled the goaltender for the extra attacker and they tied the game as Zack Stringer redirected a Cotton shot to make it a 4-4 tie to force overtime.

In the extra session, the Oil Kings outshot the Hurricanes 3-1 but neither team scored to end the game as for the second time in four meetings the two teams decided the game in a shootout. In the shootout, Davis and Cotton both scored while Dylan Guenther and Neighbours were denied by Carl Tetachuk as the ‘Canes completed the 5-3 shootout victory.

The Hurricanes outshot the Oil Kings 36-27 in the game. Lethbridge was 1/5 on the power play while Edmonton ended the night 1/2 on the penalty kill.

The win for the Hurricanes was their second straight victory and improved their record to 2-1-0-0 in the first three of a four-game homestand. The win improved the ‘Canes home-ice record to 17-7-2-4 on the year while lifting their overall record to 36-15-2-5 on the campaign.

The Hurricanes end their four-game homestand on Saturday as they welcome the Brandon Wheat Kings to the ENMAX Centre at 7:00pm. The ‘Canes will also induct Byron Ritchie and Shane Peacock into the Wall of Honour prior to the game. Tickets can be purchased online at www.enmaxcentre.ca, by calling 403-329-SEAT (7328) or by visiting the ENMAX Centre Ticket Centre.