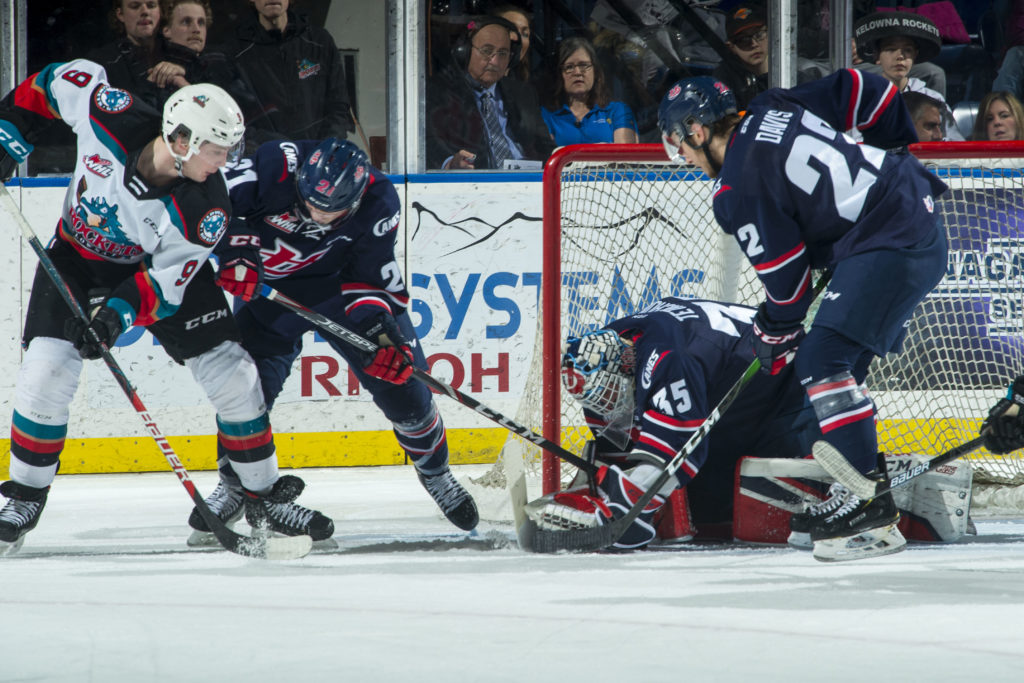 Kelowna, BC – The Lethbridge Hurricanes ended a four-game road trip on Saturday with a 5-4 loss to the Kelowna Rockets at Prospera Place.

The Hurricanes had a strong start to the game as they struck first when Ty Nash lifted one over the glove of Roman Basran on a delayed penalty to give Lethbridge a 1-0 lead just 3:32 into the game; Oliver Okuliar and Danila Palivko earned the assists. Kelowna answered back when Trevor Wong scored his sixth of the season to tie the game just 4:05 later. The Rockets on a power play took the lead as Matthew Wedman banged home his 21st goal of the year before Pavel Novak scored his team-leading 25th of the season to give Kelowna a 3-1 lead after twenty minutes of play.

In the second period, the Hurricanes carried the play as they outshot the Rockets 14-4 in the frame. Lethbridge poured it on with chance after chance but Basran was solid turning aside all 14 shots in the period. Kelowna struck for the second time on the power play as Kyle Topping ripped one by a screened Carl Tetachuk to make it 4-1. The Rockets added another goal as Wedman scored his second of the game on a turnover as Kelowna held a 5-1 lead after two periods of play.

The Hurricanes charged in the third period as they scored three goals in a span of 2:23. Alex Cotton reached the 20-goal plateau at the 8:38 mark to make it a 5-2 hockey game; Brett Davis earned the lone assist on the goal. Just 1:07 later, Davis set up Dylan Cozens in front of the net and he tipped one under Basran to make it a two-goal deficit. Cozens added another just 1:16 after his first as he notched his 38th goal of the year to make it a one-goal game. The ‘Canes pulled the goaltender late in the game with hopes of completing the come-back but ran out of time as they fell 5-4 to the Rockets.

The Hurricanes outshot the Rockets 12-7 in the third period and 39-25 in the game. Lethbridge went 0/5 on the power play while Kelowna was 2/3 with the extra man.

The loss for the ‘Canes was their third straight defeat as they fall to 37-19-2-5 on the season. The Hurricanes end their four-game road trip with a 1-3-0-0 record with the lone victory coming in Calgary against the Hitmen. The ‘Canes are now 3-7-0-0 in their last 10 games.

The Hurricanes return to the ENMAX Centre on Friday, March 13th when they welcome the Edmonton Oil Kings at 7:00pm. Tickets can be purchased online at www.enmaxcentre.ca, by calling 403-329-SEAT (7328) or by visiting the ENMAX Centre Ticket Centre.