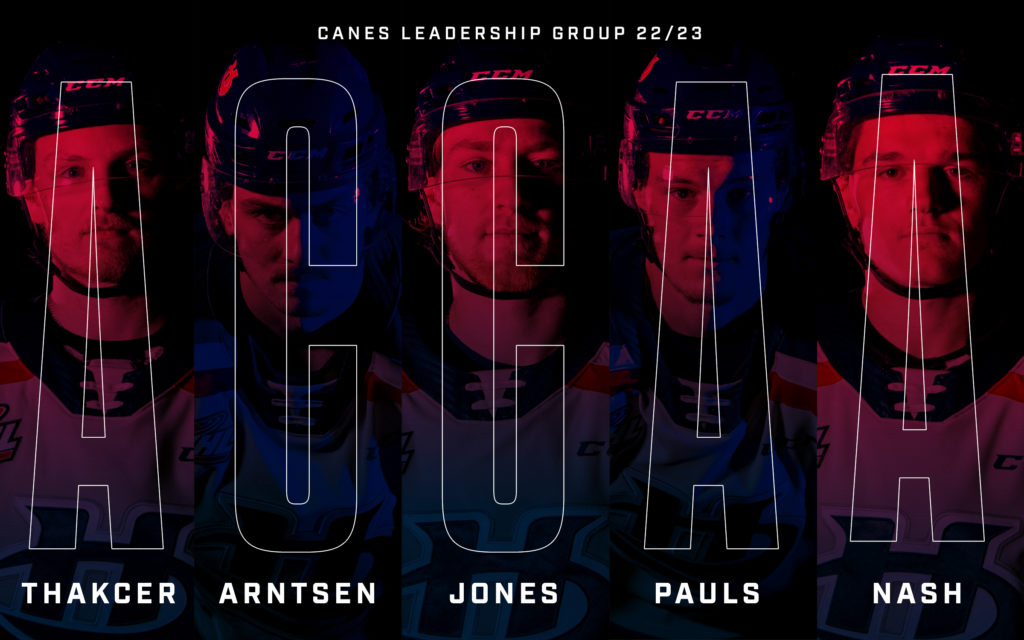 Jones, 20, was named the 30th captain in franchise history last season, sharing the honour with Arntsen. The Olds, AB, product enters his fourth and final season in the Western Hockey League, all with the ‘Canes. The 6’3, 207-pound forward has appeared in 155 career regular season games with the Hurricanes collecting 71 points (33g-38a) along with 57 penalty minutes. Jones set career-highs in goals, assists and points in 2021-2022.

Arntsen, 19, was named the 31st captain in franchise history a year ago. The former second-round draft pick of the Hurricanes in the 2018 WHL Prospects Draft. The Dinsmore, SK, product recently attended Carolina Hurricanes Rookie Camp. He has appeared in 134 regular season games with Lethbridge totaling 47 points (10g-37a), including career-highs in goals, assists and points last year.

Thacker, 20, who enters his fourth and final season in the WHL was named as an alternate captain. The Fort Saskatchewan, AB, product has skated in 148 regular season WHL games, 146 as a Hurricane, collecting 106 points (21g-85a) along with 42 penalty minutes. The 5’10, 180-pound forward finished second in team scoring for the ‘Canes last year with a career-high 64 points while finishing eighth in the Eastern Conference in assists.

Nash, 19, who was drafted by the Hurricanes in the ninth-round in the 2018 WHL Draft was named as the ‘Canes third alternate captain for 2022-2023. The Scottsdale, AZ, product enters his fourth season with Lethbridge having skated in 143 career regular season games totaling 66 points (27g-39a) along with 73 penalty minutes. Nash recently attended the Edmonton Oilers Rookie Camp.

The Hurricanes open the WHL Regular Season tonight when they visit the Medicine Hat Tigers at 7:00pm. The ‘Canes will welcome the Tigers in the Dairy Queen Home Opener on Friday, September 30th at the ENMAX Centre. Tickets can be purchased by visiting the ENMAX Centre Ticket Centre, the Yates Memorial Theatre Ticket Centre, by calling 403-329-SEAT (7328) or online at www.lethbridgehurricanes.com.