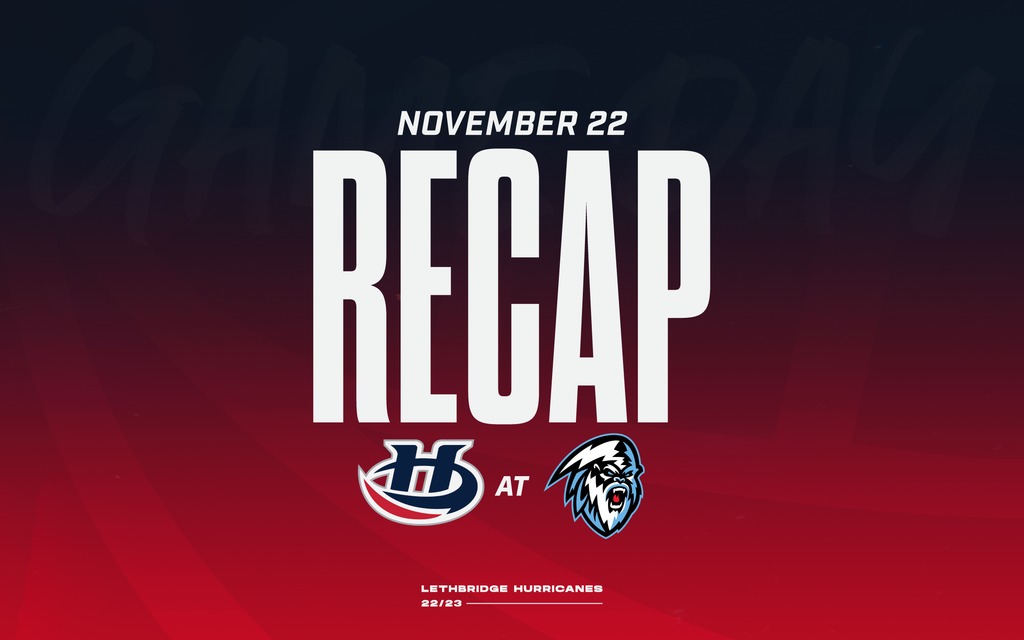 Winnipeg, MB – The Lethbridge Hurricanes opened a six-game road trip on Tuesday with a 2-1 victory over the WHL-leading Winnipeg ICE at the Wayne Fleming Arena.

The Hurricanes entered the trip with a 6-1-0-1 record in their last eight games after a stretch that saw them play seven of eight games at the ENMAX Centre. Lethbridge had a great first period outshooting Winnipeg 19-10 in the opening frame. The ‘Canes opened the scoring at the 6:14 mark as Tristan Zandee snapped home a power play goal beating Winnipeg goaltender Mason Beaupit from the right circle to make it 1-0 Lethbridge; Nolan Bentham and Brayden Edwards earned the assists on the goal. Lethbridge outshot the ICE 10-0 in the first half of the period. With 1:40 remaining in the first period, the Hurricanes doubled their lead when Tyson Zimmer cashed for the third straight game lifting home his fifth goal of the season to make it 2-0; Edwards and Joe Arntsen were credited with the assists as the ‘Canes led 2-0 after one period.

Winnipeg was much better in the second period as they outshot Lethbridge 14-13. Of the 14 shots for the ICE, many of them were grade-A chances for the WHL’s top team. Carson Lambos had a great chance from the slot, but Harrison Meneghin dove across to get his arm down on the goal line to keep the puck from crossing the line keeping Lethbridge ahead 2-0. The ICE continued to pour it on but Meneghin continued to stand tall in the Hurricanes crease. The ‘Canes had a late power play opportunity and appeared to add a third goal with a goal-line scramble but after a review it was deemed the puck didn’t cross the line keeping it a 2-0 Lethbridge lead after forty minutes of play.

In the third period, the ICE struck early to cut the ‘Canes lead in half when former Hurricane Ty Nash ripped home his ninth goal of the season extending his goal streak to three-straight games; Conor Geekie earned the lone assist on the goal to make it 2-1. Winnipeg continued to push outshooting Lethbridge 13-7 in the third period, but Meneghin made countless great saves to keep the Hurricanes in front by a single goal. The ICE pulled the goaltender for the extra attacker but the ‘Canes were able to steer home the 2-1 victory.

Lethbridge outshot Winnipeg 39-37 in the contest. The ‘Canes were 1/5 on the power play while the ICE went 0/3 on the man advantage.

The victory for the Hurricanes improves the ‘Canes record to 7-1-0-1 in their last nine games as they improved to 5-5-0-0 on the road this season. Lethbridge improved to 12-9-0-1 on the season with the win evening their season series against Winnipeg to 1-1-0-0 on the year.

The Hurricanes will continue their six-game road trip on Wednesday with the second of a pair against the Winnipeg ICE at 6:00pm MT at the Wayne Fleming Arena before visiting the Brandon Wheat Kings for a pair of games on Friday and Saturday.