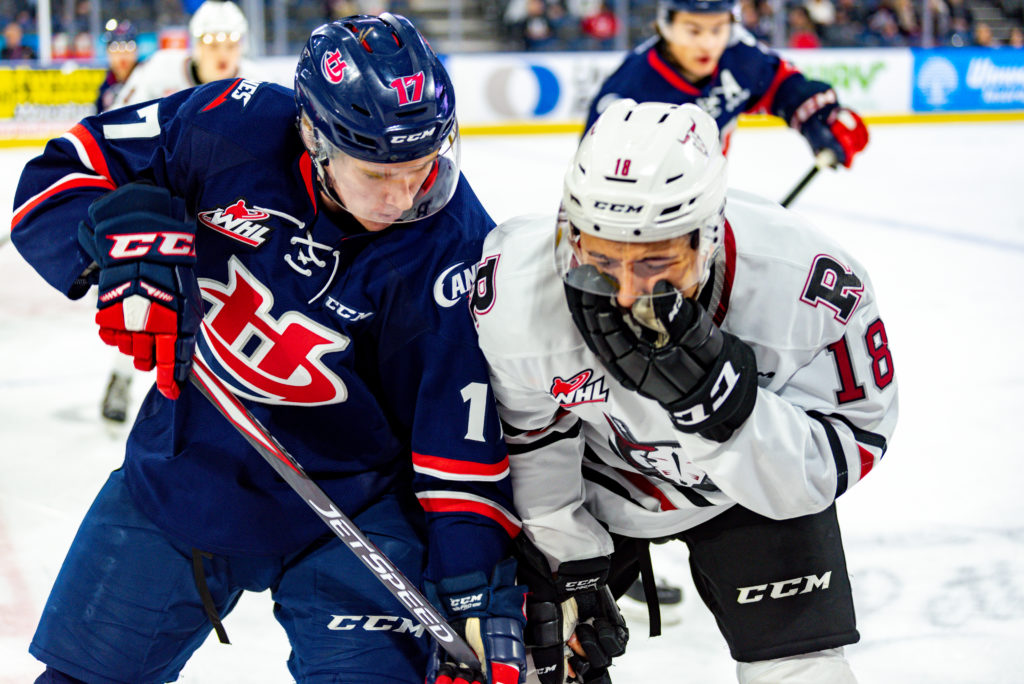 Red Deer, AB – The Lethbridge Hurricanes ended a stretch of seven-straight games on the road on Wednesday with a wild 7-6 win in Red Deer against the Rebels at Westerner Park Centrium.

The Hurricanes and Rebels played an even first period which saw Red Deer outshoot Lethbridge 10-8 in the opening frame. After an early penalty kill for the ‘Canes, they pushed back and scored the games first goal when Alex Cotton scored his WHL-leading 16th goal by a defenseman to make it 1-0 just 5:25 into the game; Calen Addison and Dylan Cozens earned the assists on the goal. Red Deer answered back to tie the game 1-1 when Josh Tarzwell scored his team-leading 22nd goal of the season as the game was tied after twenty minutes of play.

It was a wild second period that saw the two teams combine for six goals. Red Deer pulled ahead with a power play goal at the 5:24 mark when Tarzwell scored his second of the game to make it 2-1 for the Rebels. Red Deer added two more goals in a span of 1:07; first, Ben King on a turnover behind the net made it 3-1 Rebels – that goal ending the night of Carl Tetachuk who allowed three goals on 15 shots. Bryan Thomson entered the game and surrendered a goal on his first shot faced as Keaton Sorensen beat him at the 9:07 mark to make it 4-1 Red Deer. After the commercial time-out, the Hurricanes went to a power play and just seven seconds into the extra man Logan Barlage banged home an Oliver Okuliar rebound to cut the lead in half. The ‘Canes pulled to within one when Jett Jones scored his sixth of the season and a loose puck in from after a wraparound by Ty Nash before Dylan Cozens tied the game 4-4 with his 29th goal of the season – and 200th career WHL point – as the game was even after forty minutes.

Just one minute into the third period, the Rebels pulled back ahead when Zak Smith beat Thomson with a backhand shot to make it a 5-4 Red Deer advantage. Once again, the ‘Canes tied the game just 2:14 after the Rebels pulled ahead when Ty Prefontaine had a point shot deflect off a defender’s stick and passed Byron Fancy to draw the game even 5-5. However, less than two minutes after tying the game, Red Deer scored another go-ahead goal as King finished his second of the night – and fourth point – to make it 6-5. The ‘Canes were faced with a lengthy penalty kill when Trevor Thurston was issued a five-minute misconduct of kneeing while Lethbridge was simultaneously assessed a bench minor resulting in a five-on-three power play for Red Deer but the Hurricanes penalty kill stood strong keeping the Rebels at bay. Lethbridge then tied the game with 3:01 left in regulation when Brett Davis finished a centering pass from Cozens to make it a 6-6 game as he scored him his return to The Centrium. With just over two minutes left in regulation, the Hurricanes were issued a power play and they made good on the man advantage as Davis ripped home his second goal of the night with 48 seconds left in the contest to give the ‘Canes a 7-6 lead which they would hold onto for the see-saw victory.

Hurricanes outshot the Rebels 17-13 in the third period and 39-33 in the game. Lethbridge went 2/4 on the power play while going 5/6 on the penalty kill.

The victory for the Hurricanes was their fifth straight win against Red Deer as they post a 5-1-0-0 record in the six game season series while improving to 25-5-1-1 in their last 32 regular season meetings dating back to February of 2015. The win improves the ‘Canes WHL-leading road record to 18-7-0-1 on the year while lifting their overall record to 31-12-2-5 on the season.

The win also improves head coach Brent Kisio’s all-time record to 188-105-30 in his five years with the ‘Canes. Kisio now tied for the all-time lead in coaching victories in Hurricanes franchise history with Bryan Maxwell.

The Hurricanes return to the ENMAX Centre on Saturday, February 8th when they welcome the Prince Albert Raiders. Tickets can be purchased online at www.enmaxcentre.ca, by calling 403-329-SEAT (7328) or by visiting the ENMAX Centre Ticket Centre.