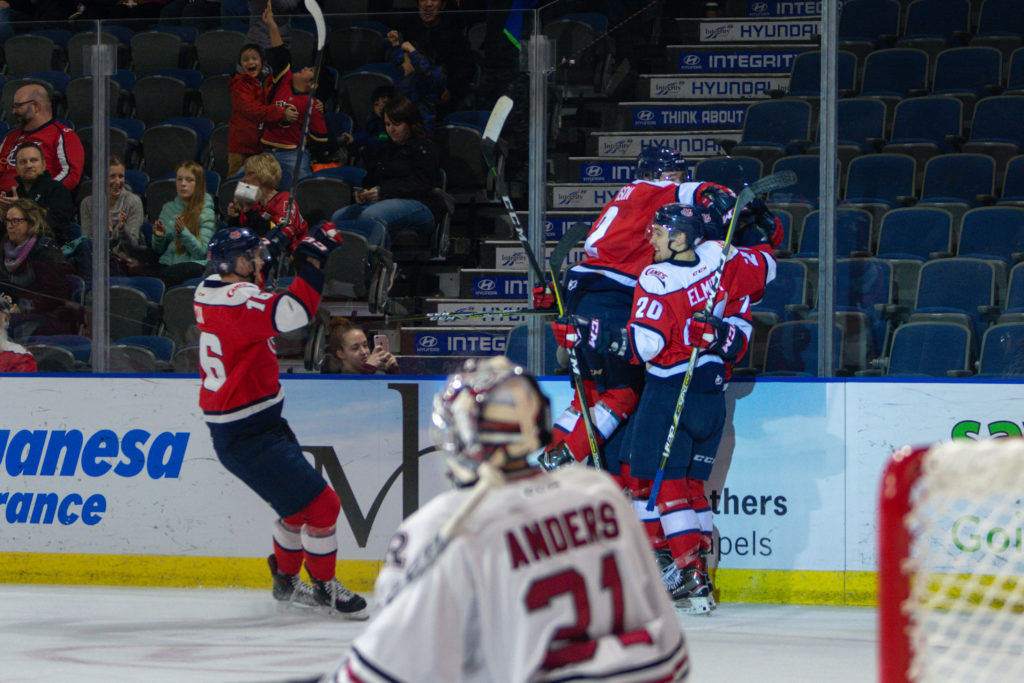 Red Deer, AB – The Lethbridge Hurricanes began their final weekend of the regular season with a 4-3 victory in Red Deer against the Rebels on Friday night extending their winning streak to seven straight games.

The Hurricanes had a strong start to the game as they opened the scoring at the 6:01 mark while four-on-four when Dylan Cozens ripped home his 34th goal of the season to make it 1-0 while extending his point-scoring streak to 15-straight games; Calen Addison and Jake Elmer, who signed an entry-level contract with the New York Rangers on Friday, extended his point streak to 17-straight games with the assist. The ‘Canes made it 2-0 on a four-on-three power play goal by Jake Leschyshyn just thirty seconds later; Jordy Belllerive and Addison picked up the helpers. Red Deer was able to cut the Hurricanes lead in half as Reese Johnson was able to net his 25th goal of the year to make it 2-1 Lethbridge after twenty minutes. The ‘Canes outshot the Rebels 15-8 in the first period.

Red Deer pulled even early in the second period as Johnson scored his second of the night on a power play at the 5:18 mark to make it 2-2. Lethbridge re-took the lead as Leschyshyn scored his second goal of the game at the 12:58 mark on a Taylor Ross rebound to make it 3-2; the goal by Leschyshyn re-took the team lead with his 39th goal of the season. Just 43 seconds later, Johnson completed his hat-trick to once again tie the game 3-3 after forty minutes of play. The Rebels outshot the Hurricanes 15-9 in the middle frame.

In the third period, the Hurricanes outshot the Rebels 9-7 and would score the lone goal as Leschyshyn completed his first hat-trick as a ‘Cane to make it 4-3 at the 4:15 mark; Bellerive and Nick Henry earned the assists on Leschyshyn’s 40th goal of the season.

Final shots in the game favoured the Hurricanes 33-30 on the night. The ‘Canes went 1/1 on the power play and 2/3 on the penalty kill.

The win for the Hurricanes extends their winning streak to seven-straight games while improving their record to 10-1-0-0 in their last 11 games. Lethbridge improves to 39-18-5-5 on the season with the win and are once again tied in points with the Edmonton Oil Kings in the Central Division standings.

The Hurricanes will play their final game of the regular season on Saturday when they visit the Medicine Hat Tigers at the Canalta Centre at 7:30pm.

The ‘Canes will be back at the ENMAX Centre for Game 1 of the WHL Playoffs. Individual game tickets for the first round will be available for purchase on Wednesday, March 20th at 9:00am. They can be purchased online at www.enmaxcentre.ca, by calling 403-329-SEAT (7328) or by visiting the ENMAX Centre Ticket Centre.