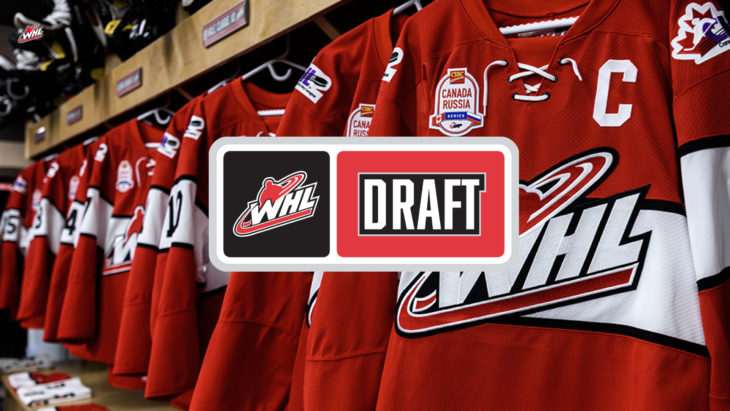 With their first round selection (8th overall) the Hurricanes selected Lethbridge product Zack Stringer. The 6’1”, 152-pound forward played as an underage with the Lethbridge Midget AAA Hurricanes of the Alberta Midget Hockey League. In 33 regular season and playoff games, Stringer recorded a total of 46 points (28g-18a) while adding another 10 points (7g-3a) in seven games at the 2018 Telus Cup helping the Hurricanes to a Bronze medal.

“[Arnsten] is a big defenseman that skates pretty well and has some offensive ability. He’s a character kid and we wanted to pick up early,” said MacLachlan.

The ‘Canes selected forward Jaden Uy in the fourth round (73rd overall) from Richmond, BC. The 6’0”, 157-pound forward spent the 2017-2018 season with the Seafair Islanders Bantam A1 before drafting Fischer O’Brien from Prince George in the fifth round (98th overall). O’Brien played with the Prince George Cougars Bantam T1 and is the brother of former WHL player Brogan O’Brien.

“[Jaden Uy] is a very skilled forward. He skates well, he thinks the game well and we’re very happy to get him where we did,” said MacLachlan. “He had 150 points this year in his league. He can put the puck in the net, he can pass the puck, he’s a complete forward.”

Lethbridge then selected defenseman Wyatt Wilson with their 116th overall pick who played with the Yale Hockey Academy in 2017-2018. In 25 games with Yale, the 6’2”, 192-pound defenseman from Swift Current registered nine points (1g-8a) along with 23 penalty minutes.

“[Wilson] is a big, strong defenseman. He plays with an edge every night and he’s got really good skill and his skating is pretty good,” said MacLachlan.

The Hurricanes picked their only goaltender in the seventh round (148th overall) when they selected Jared Picklyk from the Okanagan Hockey Academy. The 6’2”, 175-pound puck-stopper from Kelowna appeared in 15 games this season posting a 9-4-0 record with a 4.65 goals against average and a .860 save percentage.

“[Picklyk] is quick. He moves side to side, he’s athletic and he stops the puck and competes hard,” said MacLachlan.

With the first of two eighth round picks, the ‘Canes chose defenseman Boston Lajeunesse, 161st overall. The 5’11”, 175-pound rearguard posted 18 points (5g-13a) along with 53 penalty minutes in 35 games with the Red Deer Rebels Bantam AAA. The Hurricanes then selected forward Ashton Romaniuk (166th overall) from the Eastman Selects. In 34 games with Eastman, Romaniuk collected 22 goals and 32 points with 82 penalty minutes.

“[Lajeunesse] is a kid that really improved his footspeed. We were really happy to get him where we picked up,” said MacLachlan. “He has an offensive ability to him, he plays with an edge and he plays hard and never takes a shift off.”

“[Romaniuk] is a big strong forward. He skates well and is a good 200-foot guy that just gives you everything he’s got and got good skill.”

The Hurricanes held to ninth round draft picks as well as they selected forward Ty Nash (183rd overall) from Scottsdale, Arizona. The 5’7”, 130-pound forward registered 14 points (8g-6a) and 51 penalty minutes in 26 games with the Arizona Bobcats. He is also the son of former National Hockey League player Tyson Nash, who also played his junior hockey with the WHL’s Kamloops Blazers.

“[Nash] is a little bit smaller right now but we know he’s going to grow. He has really good skill and he thinks the game so well and we’re very happy to have him in our organization,” added MacLachlan.

With their final selection at 195th overall, the Hurricanes selected defenseman Kayden Sadhra-Kang from Richmond who played for the St. George’s School Bantam Varsity. The 6’3”, 170-pound defenseman skated in 26 games this season recording 43 points (8g-35a) and two penalty minutes.

“[Sadhra-Kang] is a big defenseman. He skates well and his first pass is good,” said MacLachlan. “I have no idea why he was still there when we picked but we’re so happy to have him.”