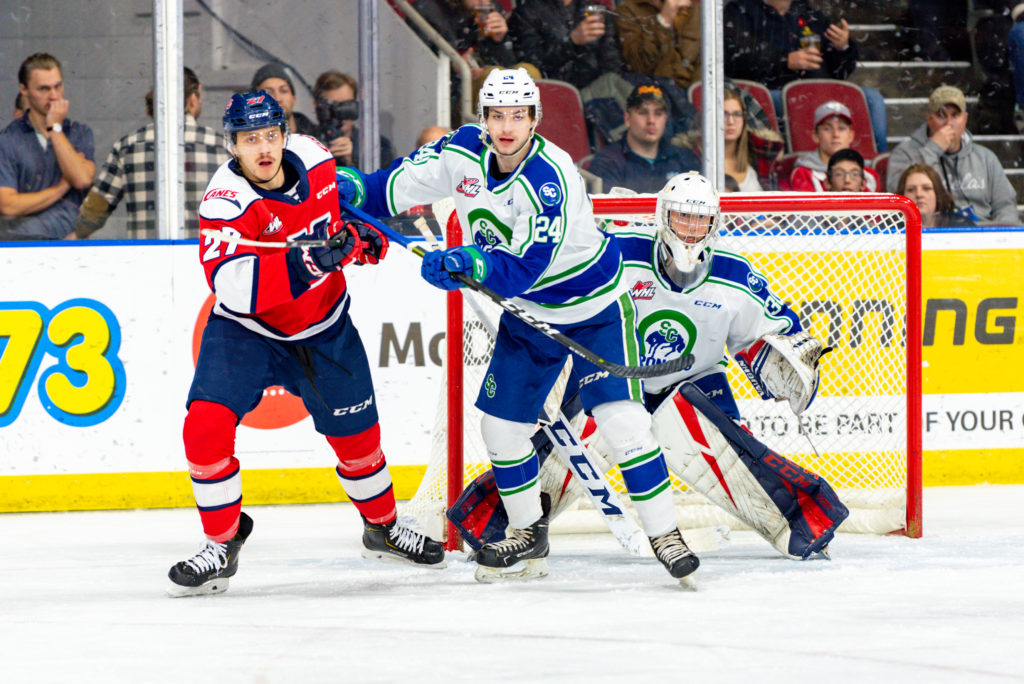 Swift Current, SK – The Lethbridge Hurricanes completed a three-game road trip on Wednesday with a 6-2 victory in Swift Current against the Broncos at Innovation Credit Union i-Plex.

The Hurricanes – who entered after earning a 6-0 victory on Sunday in Vancouver against the Giants – picked up where they left off on Sunday as they jumped out to an early 1-0 lead when Dylan Cozens banged home his 16th goal of the year just 47 seconds into the game, which was Cozens’ 150th career game, Danila Palivko and Calen Addison earned the assists on the goal as Addison picked up his 150th career helper on the tally. The ‘Canes continued to press in the period but Broncos goaltender Reece Klassen was strong turning aside 16 of 17 Lethbridge shots; Broncos had just five shots in the first period.

Lethbridge added to their lead just 2:02 into the middle frame as Alex Cotton ripped one by Klassen for his seventh goal of the year to extend his point-scoring streak to eight-straight games giving the ‘Canes a 2-0 lead. Just 1:27 later, Logan Barlage buried his fifth goal of the year to make it 3-0; Dino Kambeitz and Zack Stringer earned the assists on the goal. Swift Current cut the ‘Canes lead back to two when Ethan Regnier beat Carl Tetachuk on a breakaway to make it 3-1 but Noah Boyko restored the three-goal lead with a power play strike at the 5:34 mark to make it 4-1 for the Hurricanes after forty minutes. Lethbridge outshot Swift Current 19-9 in the middle frame.

In the third period, the Hurricanes continued to pour it on as just 1:01 into the final frame D-Jay Jerome tapped home a rebound for his 10th goal of the season to make it 5-1; Oliver Okuliar earned the lone assist on the goal. Lethbridge made it 6-1 when newcomer Trevor Thurston – who was acquired Monday from Kamloops – scored his first WHL goal in his ‘Canes debut at the 8:28 mark on a point-shot from the blue line. The Broncos added a late goal by Aiden Bulych with 13 seconds left to make it a 6-2 final.

The Hurricanes set a new season-high with 52 shots on goal while surrendering just 17 on the night. Lethbridge went 1/3 on the power play while Swift Current did not have a power play opportunity.

The win for the Hurricanes was their second straight victory and improved their road record to 9-3-0-1 on the season; most road wins in the WHL this season. Lethbridge improved their overall record to 15-6-0-4 on the year.

The Hurricanes return to the ENMAX Centre on Friday, November 22nd against the Prince Albert Raiders. Tickets can be purchased online at www.enmaxcentre.ca, by calling 403-329-SEAT (7328) or by visiting the ENMAX Centre Ticket Centre.