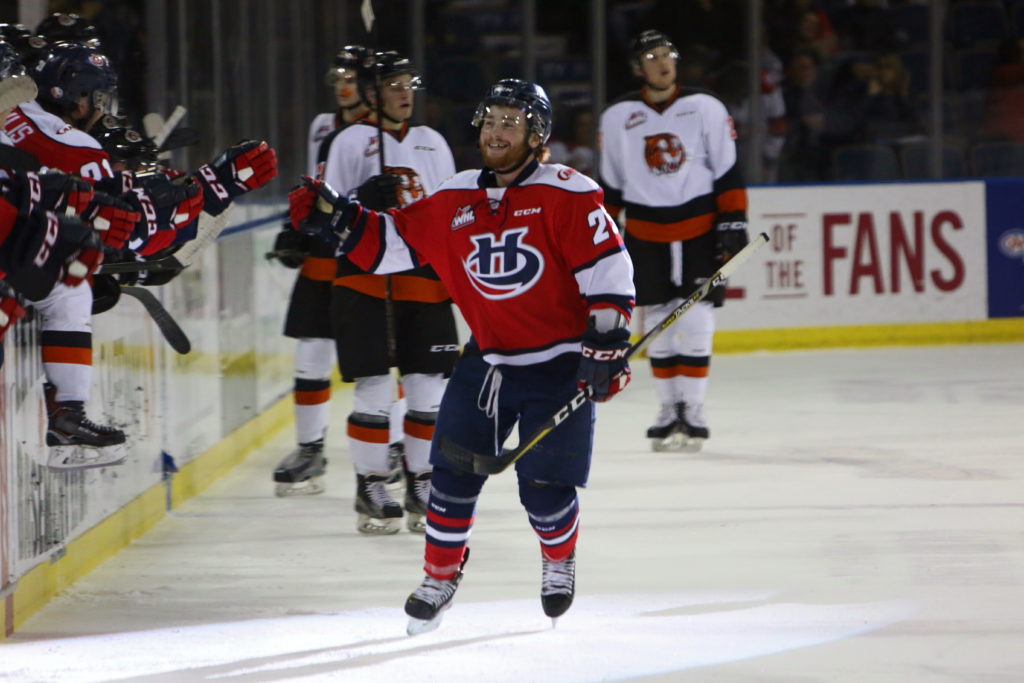 Medicine Hat, AB – The Lethbridge Hurricanes completed the 2017-2018 regular season on Saturday night with a 3-2 victory in Medicine Hat against the Tigers.

It wasn’t a great start for the Hurricanes as the Tigers jumped out to an early 1-0 lead as Tyler Preziuso scored on the opening shift just 25 seconds into the game as his shot snuck through the legs of Logan Flodell. The ‘Canes pushed back but could not beat Jordan Hollett in the first period as the Tigers had a lead after one period. Hurricanes were outshot 11-7 in the opening frame.

Early in the second period, the Hurricanes were given a power play but it was the Tigers that struck shorthanded as Preziuso golfed home his second of the night to make it 2-0 Medicine Hat just 1:03 into the middle frame. The Hurricanes cut the lead in half at the 8:11 mark as Zach Cox scored his second goal of the season to make it a 2-1 game as he scores his first goal in 30 games; Owen Blocker and Keltie Jeri-Leon earned the assists on the goal. The ‘Canes pulled even at the 17:19 as Jordy Bellerive buried his 46th goal of the season on a rebound to make it 2-2; Koletrane Wilson and Dylan Cozens earned the helpers as the game was tied after forty minutes of play. Shots favoured the ‘Canes 11-9 in the middle period.

The Hurricanes pulled ahead early in the third period as Logan Barlage roofed home his seventh of the season just 1:14 into the period as the ‘Canes had their first lead of the game by a 3-2 score; Egor Zudilov and Zane Franklin earned the helpers. The Tigers pulled the goaltender late in the game by Flodell was air-tight not allowing anything more as the ‘Canes hung on for the 3-2 win.

The win for the Hurricanes ends an eight game losing streak as they finish the regular season with a 33-33-6-0 record on the year. The win also snaps a five-game road losing streak.

The Hurricanes will begin the 2018 WHL Playoffs on Friday, March 23rd at the ENMAX Centre when they welcome the Red Deer Rebels in the first of a best-of-seven opening round series. Tickets to the general public for the first round will go on sale on Monday at 9:00am. Tickets can be purchased online, by calling 403-329-SEAT (7328) or by visiting the ENMAX Centre Ticket Centre.