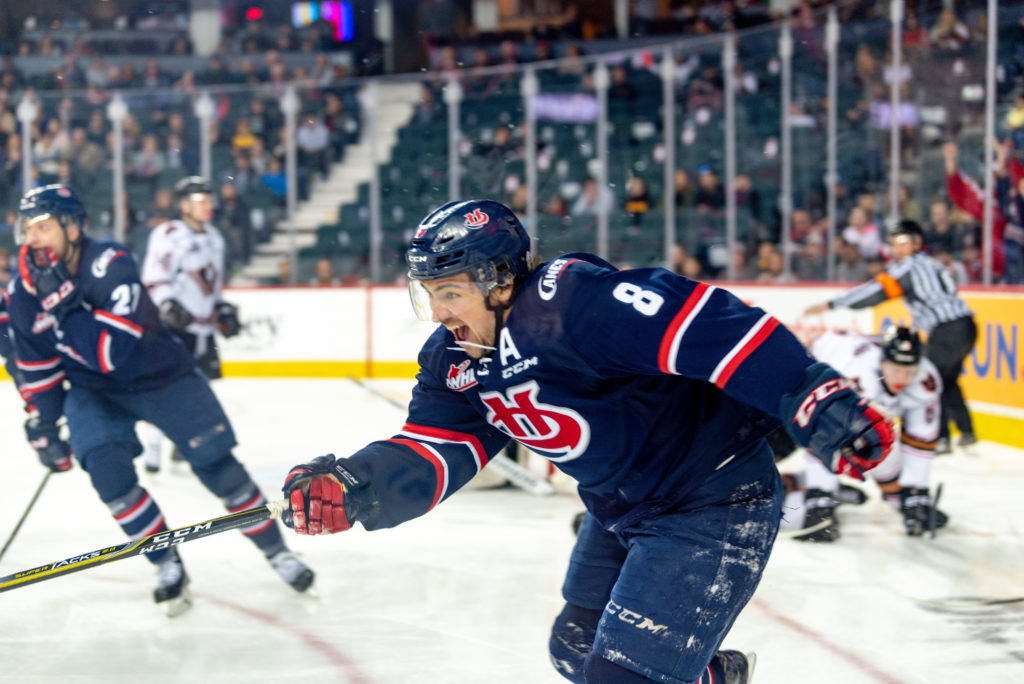 Calgary, AB – The Lethbridge Hurricanes earned a wild 7-6 overtime victory on Sunday afternoon in Game 6 of their first-round playoff series against the Calgary Hitmen and force a winner-take-all Game 7 on Tuesday at Nicholas Sheran Arena.

It was a wild start to the game as the first three minutes saw three goals. Calgary opened the scoring for the fifth time in the series as Kaden Elder scored his first of the playoffs exactly one minute into the game to make it 1-0 Hitmen. Lethbridge responded just 1:08 later as Zach Cox scored an unassisted goal for his first of the post-season to tie the game. Just one minute after Cox scored, Dylan Cozens potted his fourth of the playoffs to give the ‘Canes their first lead 2-1; Jake Elmer earned the lone assist on the goal. A power play goal by Jordy Bellerive gave the Hurricanes a 3-1 lead at the 6:32 mark of the first period before Calgary scored a power play goal of their own to see Lethbridge lead 3-2 after twenty minutes.

In the second period, the Hurricanes pushed the pace as they kept Calgary hemmed in their zone for the better part of the period. The ‘Canes outshot the Hitmen 14-5 in the second period but Jack McNaughton stopped all 14 Hurricanes shots. Calgary tied the game at the 5:42 mark in the middle frame as Devan Klassen had a puck go off his shin-pad and passed Carl Tetachuk to make it 3-3 at the second intermission.

The see-saw affair continued into the third period as Nick Henry scored on a power play 2:57 into the period to make it 4-3 for the Hurricanes. Calgary tied the game at the 11:12 mark as Ryder Korczak scored his second of the series to make it 4-4. Lethbridge pulled back ahead with another power play goal by Jake Leschyshyn at the 11:47 mark only to see James Malm tie the game and then Mark Kastelic put Calgary ahead 6-5 with 2:23 left in the game. The ‘Canes pulled the goaltender and with 32-seconds left in the game Calen Addison ripped home his second goal of the playoffs to tie the game at 6-6 and force overtime.

In the overtime, both teams had chances early and the ‘Canes ended the game as Taylor Ross scored his first of the post-season at the 3:57 mark on a wrap-around to lift Lethbridge to the wild 7-6 overtime victory to force Game 7 on Tuesday; Scott Mahovlich and Logan Barlage earned the assists on the goal.

The Hurricanes outshot the Hitmen 41-33 in the hockey game. Lethbridge went 3/4 on the power play while Calgary when 1/4 with the extra man.

The victory for the Hurricanes ties the best-of-seven series at 3-3 and forces a Game 7 at Nicholas Sheran Arena on Tuesday at 7:00pm.

The ‘Canes will once again hold a family-friendly viewing party at Bully’s at the Lethbridge Exhibition Ground which will begin at 5:30pm. The game will also be available at Browns Socialhouse locations in Lethbridge and can be heard on 106.7 ROCK.