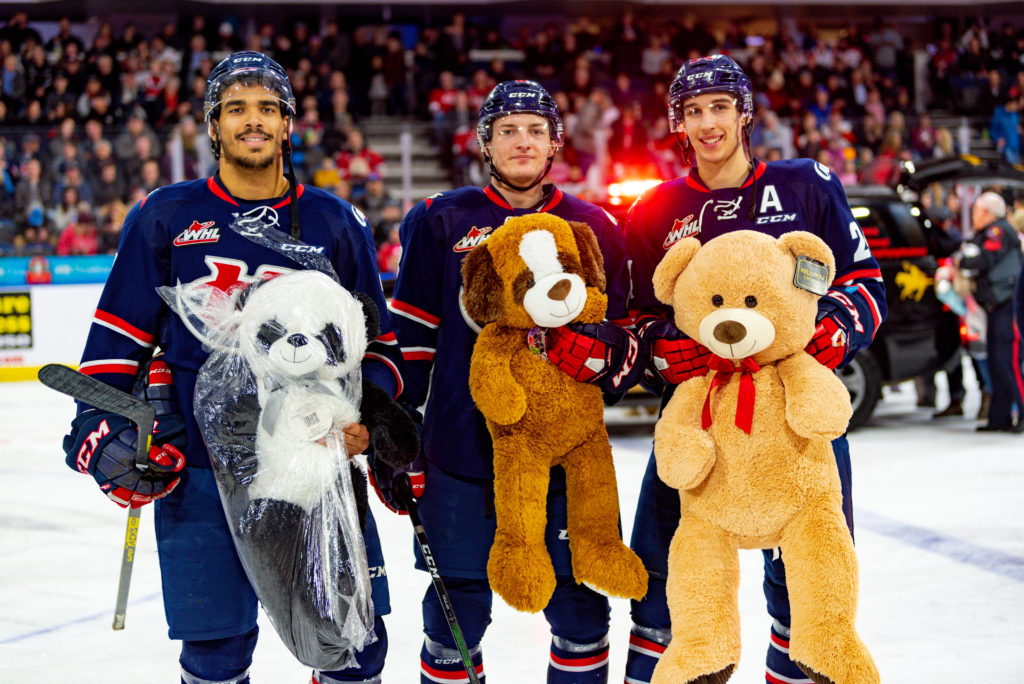 Lethbridge, AB – The Lethbridge Hurricanes were downed 4-3 in a shootout on Friday by the Medicine Hat Tigers at the ENMAX Centre in front of 5,191 fans in the Canadian Tire Toque and Teddy Toss.

The Hurricanes had a strong start to the game as they looked to score the Teddy Bear Toss goal early as they held the shots 4-1 in the opening two minutes of the game. The ‘Canes had an early power play opportunity when Elijah Brown was penalized for tripping but despite a pair of good chance the game stayed scoreless. Lethbridge opened the scoring at the 9:57 mark when Oliver Okuliar snapped home his 22nd goal of the season to send the bears flying; Dylan Cozens and Koletrane Wilson earned the assists on the Teddy Goal. The ‘Canes added to their lead with a late power play goal by Alex Cotton as he ripped home his eighth of the year to give the ‘Canes a 2-0 after twenty minutes of play.

Early in the second period, the Tigers cut the Hurricanes lead in half when Cole Sillinger scored his 11th goal of the season just three minutes into the period to make it a 2-1 game. The ‘Canes answered with a power play goal of their own when Okuliar tapped home his second of the night and WHL-leading 23rd goal of the year to make it 3-1; Calen Addison and Cozens picked up the assists on the goal. Justin Hall was awarded a penalty shot after being taken down on a breakaway but Hall was unable to beat Garin Bjorklund on the one-on-one. Medicine Hat once again pulled within a goal when Cyle McNabb scored his third of the season to make it 3-2. Just 14 seconds after McNabb scored, the Tigers tied the game 3-3 when Elijah Brown was found back-door by Sillinger on a power play to even things after two periods of play.

The two teams locked it down in the third period as both teams had their chances to take the lead but both goaltenders stood tall keeping it a 3-3 tie. The Hurricanes held the edge in shots 11-9 in the third period. In the overtime period, the ‘Canes and Tigers again traded chances in the three-on-three play but neither team ended the game in the extra session.

For the third time this season between the two teams, the Hurricanes and Tigers went to the shootout and Medicine Hat was victorious as Brett Kemp scored the shootout winner.

The loss for the Hurricanes extended their season-long losing streak to four straight games as they fall to 0-2-0-2 in their last four outings. The ‘Canes also fall to 1-5 in games decided in the shootout. The defeat dropped the ‘Canes record to 17-9-0-5 on the year while they fell to 7-5-0-4 at the ENMAX Centre.

A total of 3,568 teddy bears and 679 toques were collected in the Canadian Tire Toque and Teddy Toss.

The Hurricanes travel to Swift Current to face the Broncos on Saturday at 6:00pm before returning to the ENMAX Centre on Wednesday when they welcome the Red Deer Rebels at 7:00pm. Tickets can be purchased online at www.enmaxcentre.ca, by calling 403-329-SEAT (7328) or by visiting the ENMAX Centre Ticket Centre.