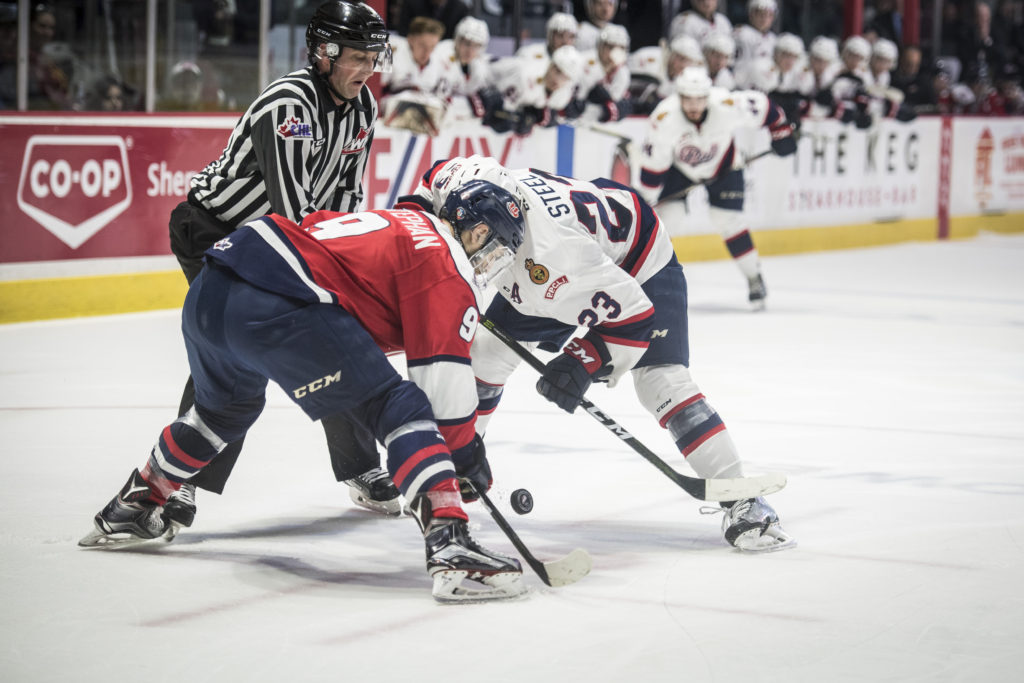 Regina, SK – The Lethbridge Hurricanes kicked off the Eastern Conference Championship series on Friday with a 3-1 road victory over the Regina Pats in Game 1 at the Brandt Centre.

The ‘Canes received some good news prior to the game as both Zane Franklin and Zak Zborosky returned to the line-up for Game 1 after missing time with injuries. Ryan Vandervlis, Matt Alfaro and Calen Addison all remained out for the start of the third round.

The Pats came out buzzing in the first period in front of their home crowd. Regina outshot Lethbridge 9-0 early on and opened the scoring early. Austin Wagner split the defense and moved in on a breakaway as he lifted one by Stuart Skinner to make it 1-0 Pats just 1:10 into the hockey game. The ‘Canes gave up two power play’s in the first period but were perfect on the penalty kill as they killed both chances for the Pats. The ‘Canes came on late in the period as they started to generate some scoring chances but trailed 1-0 after the first period. The ‘Canes were outshot 14-8 in the first period.

The Hurricanes were much better in the second period as they generated more scoring chances in front of Pats’ goaltender Tyler Brown. The ‘Canes had an opportunity on the power play but failed to tie the game with Braydon Buziak in the penalty box for delay of game. The ‘Canes eventually struck to equalize at the 13:23 mark as Giorgio Estephan one-timed a pass from Egor Babenko passed Brown to tie the game at 1-1 with his ninth of the playoffs – Igor Merezhko picked up the second assist on the game-tying goal. The ‘Canes were outshot 12-10 on the shot clock but the game was tied 1-1 after forty minutes.

Early in the third period, Pats’ forward Filip Ahl was assessed a hooking penalty as he hooked Estephan on a back-check putting the ‘Canes to their second power play of the game. On the man advantage, the ‘Canes struck to take the lead as Jordy Bellerive was able to get the last touch on a goal mouth scramble putting the ‘Canes in front 2-1 – Zborosky and Merezhko picked up the assists on the goal less than two minutes into the third period. Regina thought they had tied the game at the 8:21 mark as Wagner had one go by Skinner, however, the goal was overturned and waved off after a video review as the game stayed a 2-1 lead for the ‘Canes. The Pats pulled their goalie late in the game in hopes of tying things up but Estephan was able to force a steal and bury into the empty net to give Lethbridge a 3-1 Game 1 victory.

The Hurricanes jump out to a 1-0 series lead in the Eastern Conference Championship with the 3-1 victory. The ‘Canes also steal home ice advantage away from the Pats. The Hurricanes and Pats will face off in Game 2 in this best-of-seven series on Saturday night at 7:00pm at the Brandt Centre.