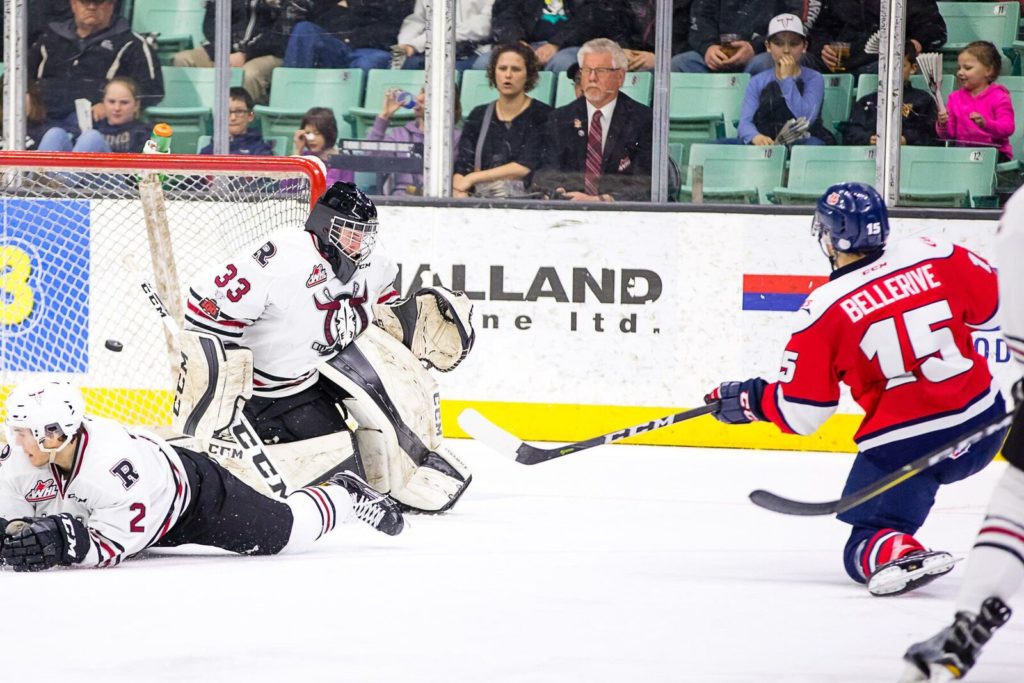 Red Deer, AB – The Lethbridge Hurricanes took a stranglehold in their best-of-seven first round series on Wednesday as they defeated the Red Deer Rebels 5-4 in overtime in Game 3 at the ENMAX Centrium.

It was a spirited start to the game as the Hurricanes and Rebels were fired up to open the game. Red Deer appeared to score the first goal of the game just 30 seconds into the game as Mason McCarty was found in front and he buried it by Logan Flodell; after a referee conference, the goal was disallowed as Flodell was knocked over and the game remained scoreless. Shortly thereafter, the ‘Canes scored a power play goal at the 1:35 mark as Taylor Ross jammed home his third of the series to make it 1-0 Lethbridge; Brad Morrison and Jordy Bellerive picked up the assists. The Rebels tied the game late in the first frame as Brandon Hagel on a partial breakaway beat Flodell to tie the game 1-1 with a shorthanded goal. Hurricanes outshot the Rebels 12-7 in the first period.

The Hurricanes pulled ahead early in the second period as a hard fore-check by the fourth line resulted on a goal as Zach Cox brought the puck out from behind the net and roofed one from the side of the net to make it 2-1 Lethbridge; Owen Blocker and Keltie Jeri-Leon earned the helpers. For Cox, he has goals in three straight dating back to the regular season. Red Deer tied the game as Kristian Reichel let fly with a point shot at the 13:52 mark to tie the game 2-2. Late in the period, the ‘Canes pulled back ahead as Morrison scored his fourth of the series with just ten seconds left in the period to make it 3-2 Lethbridge at the second intermission. Shots were tied 13-13 in the middle frame.

The ‘Canes added to their lead mid-way through the third period as Jordy Bellerive buried his third of the playoffs beating Riley Lamb five-hole to make it a 4-2 lead for the Hurricanes with 7:31 left; Dylan Cozens and Calen Addison picked up the assists on the goal. The Rebels answered quickly as Grayson Pawlenchuk pulled Red Deer back within on just 1:09 after the Bellerive goal to make it 4-3. Late in the game, the Rebels pulled the goaltender and thought they tied the game but a miraculous save by Flodell to pull the puck off the goal-line kept the ‘Canes ahead by one. However, on the same sequence, the ‘Canes were assessed a delay of game penalty and on the ensuing power play the Rebels tied the game as Reichel buried his second of the night to tie the game 4-4 and force overtime. Shots on goal in the third period favoured the Rebels 8-4.

At the end of the third period, Rebels forward Hagel was assessed a goaltender interference penalty as he collided with Flodell resulting in a power play for the Hurricanes to start overtime. Red Deer almost ended the game shorthanded as Ethan Sakowich cleared the puck and it hit a stanchion and directed straight to the net that Flodell had vacated; the ‘Canes netminder dove back to keep it from crossing the line. Shortly thereafter, the Hurricanes ended the game as Calen Addison hammered home the winner just 38 seconds into overtime to lift the ‘Canes to the 5-4 win; Morrison and Bellerive picked up the helpers on the goal.

The Hurricanes and Rebels each had one shot in overtime while the ‘Canes held the edge 30-29 in the game. Lethbridge went 3/5 on the power play in the game and were 4/5 on the penalty kill.

The win for the ‘Canes gives them a 3-0 series lead over the Rebels. The Hurricanes are now just one win away from the second round and can book their ticket there with a victory tomorrow in Game 4 at the Centrium.

The Hurricanes and Rebels will square off in Game 4 on Wednesday night at the ENMAX Centrium at 7:00pm. The game can be heard on 106.7 ROCK or watched at either Browns Socialhouse location in Lethbridge.