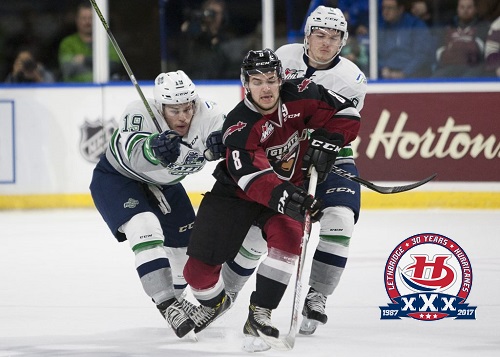 Lethbridge, AB – The Lethbridge Hurricanes Hockey Club announced Monday that they have acquired 1997-born forward Alec Baer from the Vancouver Giants in exchange for a third round draft pick in the 2017 Western Hockey League Bantam.

He was named the top High School freshman player in Minnesota by SB Nation College Hockey in November of 2012 before joining the Giants. He played his high school hockey at Benilde-St Margaret’s School where he registered 15 points (5g-10a) along with 10 penalty minutes in 19 games in 2012-2013.

The Hurricanes return to the ENMAX Centre on Friday night when they welcome the Prince George Cougars on ‘Cougar Night’ at 7:00pm. Tickets are available by online, by calling 403-329-SEAT (7328) or by visiting the ENMAX Centre or Yates Ticket Centre’s.