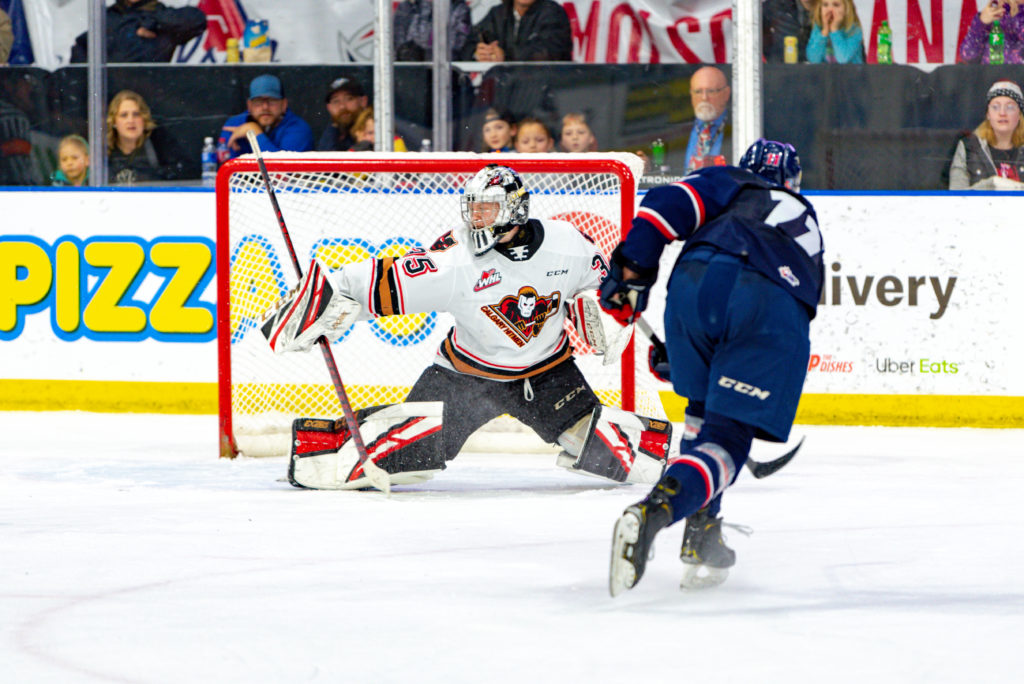 Lethbridge, AB – The Lethbridge Hurricanes returned to action on Friday as they began the second-half of the regular season with a 5-4 overtime victory over the Calgary Hitmen at the ENMAX Centre.

The Hurricanes had a great first period jumping out to a 3-1 lead after twenty minutes of play. Koletrane Wilson got the Hurricanes on the board with a power play goal just 3:47 into the game snapping home his fourth goal of the season to make it 1-0; D-Jay Jerome and Danila Palivko earned the assists on the goal. Calgary tied the game just 44 seconds later when James Malm found the net for the third time this year to even the score at 1-1. Lethbridge retook the lead when Dino Kambeitz scored his 11th of the year finishing off a beautiful centering pass by Alex Thacker to make it 2-1. Alex Cotton picked up his 11th goal of the year on a power play with just 4:27 left in the period to make it 3-1 while chasing Hitmen starting goaltender Jack McNaughton. The ‘Canes outshot the Hitmen 12-9 in the first period.

Calgary pushed back in the second period as they were able to erase the two-goal deficit. The Hitmen killed off an early power play chance for the Hurricanes as they didn’t surrender a shot on goal. Orca Wiesblatt cut the ‘Canes lead to one as he stole the puck from Alex Cotton before outwaiting Carl Tetachuk to make it a 3-2 hockey game. On a power play, Jett Woo ripped home his fifth goal of the season to tie the game at 3-3 at the 10:50 mark. Hitmen outshot the Hurricanes 10-5 in the middle frame.

In the third period, the Hitmen took their first lead of the game at the 10:01 mark when a clearing attempt pinballed off a pair of legs and into the net passed Tetachuk to make it a 4-3 lead for Calgary. The ‘Canes were able to tie the game with their third power play goal of the game when Justin Hall fired home his seventh of the season to even the score at 4-4; Logan Barlage and Alex Thacker earned the assists on the tally.

Neither team was able to break the scoreless tie through the remainder of the third period setting up overtime. In the extra session, Kambeitz would win the game with his second goal of the game and his first career overtime winning goal at the three minute mark to lift the ‘Canes to a 5-4 win.

The Hitmen outshot the Hurricanes 30-22 in the game. Lethbridge went 3/6 on the power play while 3/4 on the penalty kill.

The win for the Hurricanes was their third straight victory on home-ice improving their record to 10-5-0-4 at the ENMAX Centre while improving their overall record to 21-10-0-5 on the year. The ‘Canes improved to 4-1-0-0 in their last five games.