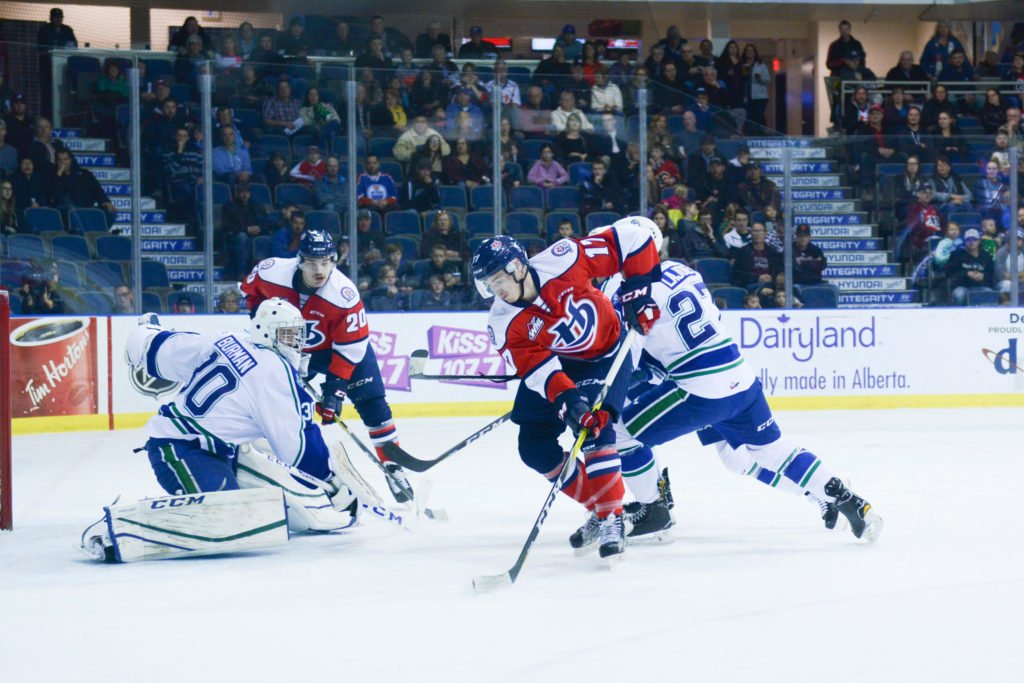 The Hurricanes had a great start to the game controlling the play in the Broncos zone in the first minute and a half and they got rewarded early. Jordy Bellerive backhanded a puck by Broncos goalie Taz Burman at the 1:32 mark right off a face-off to put the Hurricanes in front 1-0. On the same shift, Bellerive was assessed a high-sticking penalty and it took just seven seconds for the Broncos to score on the power play as Ryan Graham tipped home his ninth of the season to make it 1-1 just 1:58 into the game. The Hurricanes re-took the lead at the 10:57 mark as Tanner Nagel roofed one by Burman to make it 2-1 – Jadon Joseph picked up the lone helper on the goal. Lethbridge made it 3-1 as Colton Kroeker scored his fourth of the season with 2:22 left in the opening period – Bellerive and Tyler Wong picked up the assists on the goal. Hurricanes led 3-1 after twenty minutes of play and held the shot advantage 14-13 in the first period.

The Hurricanes were outshot 13-7 in the second period but Gilchrist was excellent in the net for the ‘Canes stopping all 13 shots he faced. The ‘Canes extended their lead with the only goal in the middle frame as Egor Babenko found Brett Davis back door and Davis snapped home his first goal of the season to make it a 4-1 lead for the Hurricanes after forty minutes of play – Ryan Vandervlis picked up the second assist on the play.

The Broncos came out flying early in the third period and would get on the board to cut the Hurricanes lead to two goals as Aleksi Heponiemi would intercept a pass in the high slot and rip one by Gilchrist just 30 seconds into the period to make it 4-2. Burman made two great saves to keep his team within striking distance only to see Colby Sissons snipe home his fourth of the year to make it a one goal game at the 11:10 mark. The Broncos continued to press and tied the game at 4-4 as Lane Pederson beat Gilchrist at the 13:42 mark as the game would go to overtime.

Overtime didn’t last long as just 43 seconds into the extra frame Brennan Menell worked his way into the attacking zone before rifling one over the glove of Burman to give the Hurricanes a 5-4 overtime victory.

The Hurricanes were outshot 42-31 in the hockey game. The ‘Canes went 0/3 on the power play while the Broncos went 1/4.

The win for the Hurricanes was their fourth consecutive and their fourth overtime win of the season. The victory improved the ‘Canes record to 10-0-1-0 in their last 11 games and 17-11-2-2 on the season.

The Hurricanes return home to face the Kelowna Rockets on Sunday at 6:00pm at the ENMAX Centre to wrap up their three-in-three weekend.