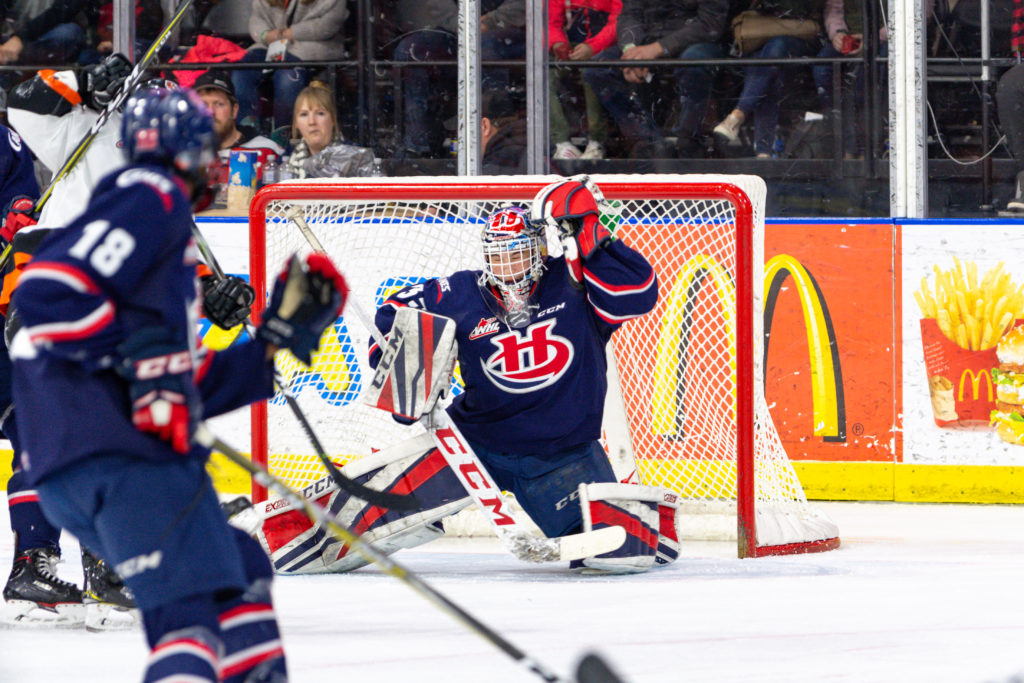 Lethbridge, AB – The Lethbridge Hurricanes continued their final home-stand of the regular season with a 5-2 victory over the Medicine Hat Tigers in front of a sold-out ENMAX Centre.

The Hurricanes had a tremendous start to game as they kept the Tigers hemmed in their own zone for the first two minutes as they peppered Medicine Hat goaltender Jordan Hollett early. The ‘Canes opened the scoring at the 5:36 mark as Jordy Bellerive reached the 30-goal plateau to make it 1-0; Logan Barlage and Nick Henry picked up the assists. Bellerive became the fifth Hurricane to reach the 30-goal mark this year. The Tigers tied the game just under five minutes later on a two-on-one as Baxter Anderson redirected home his fourth goal of the year as the game was tied 1-1 after twenty minutes. The ‘Canes outshot the Tigers 15-13 in the first period.

Lethbridge pulled back ahead in the second period as Zach Cox poked home his 11th goal of the season just 3:57 into the middle frame to make it 2-1; Jackson Shepard and Scott Mahovlich earned the assists on the go-ahead goal which ended a 32-game goalless drought for Cox. Tigers once again tied the game late in the period on a power play as Brett Kemp tipped home his 28th of the year to make it 2-2 after two periods. Tigers held the edge in shots 9-6 in the middle stanza.

In the third period, the Hurricanes retook the lead for the third time as Taylor Ross tipped a Bellerive point shot on a power play to make it 3-2 just 2:06 into the period; Jake Elmer earned the second assist as he extended his point-scoring streak to 15 consecutive games. Just 1:10 later, Dylan Cozens extended his scoring streak to 13-straight games with his 33rd goal of the season to make it 4-2. The ‘Canes added an empty-net goal as Nick Henry potted his 200th WHL points with his 27th goal of the season to make it a 5-2 final.

Shots in the third period favoured the Hurricanes 10-8 as they outshot the Tigers 31-30 in the game. Lethbridge went 0/2 on the power play and were 2/3 on the penalty kill.

The win for the Hurricanes was their fifth straight victory as they set a new season-long winning streak. The ‘Canes are now 19-9-1-4 at the ENMAX Centre this season as they improved to 37-18-5-5 on the year.

The Hurricanes will play their final home game of the regular season on Saturday as they welcome the Calgary Hitmen to the ENMAX Centre at 7:00pm. Tickets can be purchased online at www.enmaxcentre.ca, by calling 403-329-SEAT (7328) or by visiting the ENMAX Centre Ticket Centre.