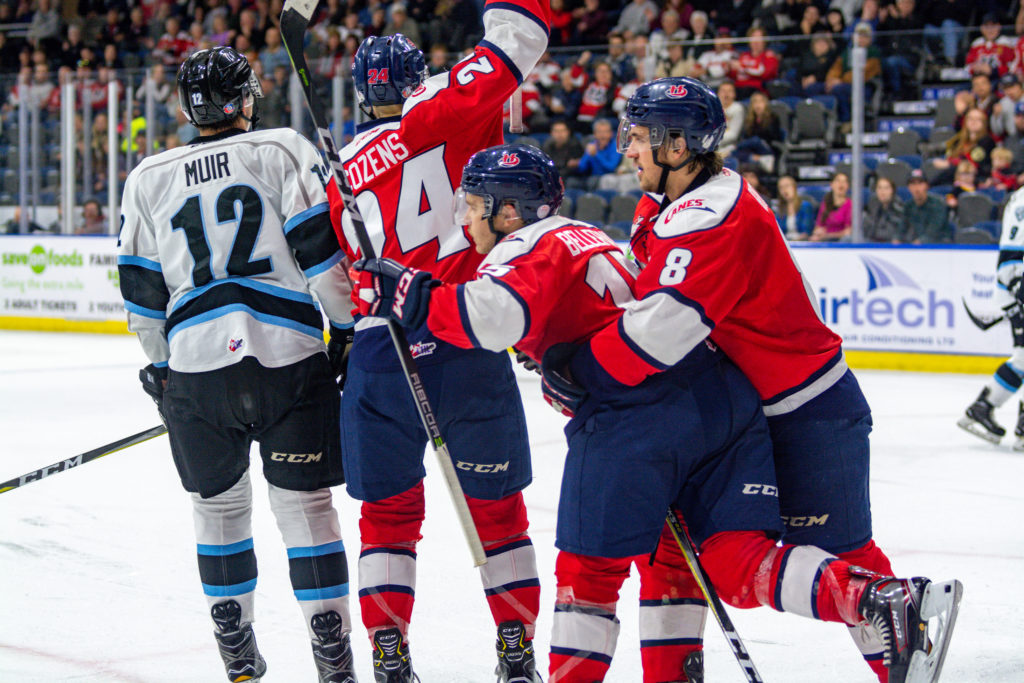 Cranbrook, BC – The Lethbridge Hurricanes began a three-game road trip on Wednesday with a 3-2 overtime victory in Cranbrook against the Kootenay Ice.

The Hurricanes started strong with a great scoring chance by Taylor Ross on the first shift but Kootenay’s goaltender Jesse Makaj made a great save right away. After killing off a Zach Cox penalty, the ‘Canes opened the scoring as Alex Cotton ripped home his second goal of the season at the 8:24 mark to make it 1-0; Keltie Jeri-Leon and Calen Addison picked up the assists on the goal. The Hurricanes held the edge in shots 17-13 in the opening frame.

The Ice tied the game early in the second period as Cole Muir hooked one home on a wraparound just 1:17 into the period to tie it at 1-1; Davis Murray and Martin Bodak picked up the assists on the goal. Kootenay took the lead as Jakin Smallwood popped home his second goal of the season to make it 2-1. Just under four minutes later, the Hurricanes tied the game as Jake Leschyshyn banged home his second as a ‘Cane and 18th of the season to make it 2-2; Calen Addison and Jordy Bellerive assisted on the game-tying goal as the two teams were tied after forty minutes of play. Shots favoured the Ice 12-10 in the middle frame.

In the third period, the Hurricanes and Ice would trade chances but neither team would find the net. Lethbridge had two power plays in the final frame but failed to capitalize despite outshooting the Ice 10-4 in the third.

The game would go to overtime and just 1:17 into the extra session Dylan Cozens would score his first career OT winner lifting the Hurricanes to a 3-2 victory; Leschyshyn and Igor Merezhko picked up the assists on the goal.

Shots in the game favoured the Hurricanes 40-30. Both teams went 0/2 on the power play in the game.

The win for the Hurricanes is their fourth straight as they improve to 6-0-1-0 in their last seven games. The victory improves the ‘Canes record to 7-4-3-0 on the road this season and 15-8-3-2 overall on the year.

The Hurricanes will continue their three-game in four night road trip on Friday when they visit the Spokane Chiefs before wrapping up the trip in Tri-City against the Americans on Saturday.

The Hurricanes will return to the ENMAX Centre on Wednesday, December 12th when they welcome the Kelowna Rockets. Tickets can be purchased online at www.enmaxcentre.ca, by calling 403-329-SEAT (7328) or by visiting the ENMAX Centre Ticket Centre.