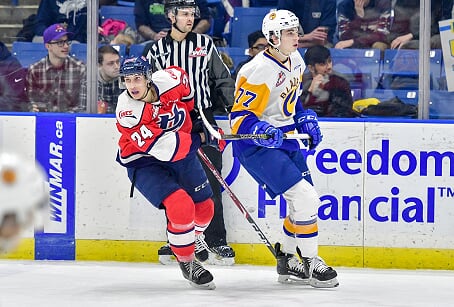 Saskatoon, SK – The Lethbridge Hurricanes continued a five-game road trip on Tuesday with a 6-4 loss to the Saskatoon Blades at SaskTel Centre.

The Hurricanes had a great start to the game as they hemmed the Blades in their own zone for the first minute-and-a-half which drew an early power play. On the man advantage, Nick Henry ripped home his 24th goal of the season to make it 1-0 Lethbridge just 2:20 into the game; Jake Leschyshyn and Calen Addison earned the assists. The lead didn’t last long however as Saskatoon answered back on a two-on-one when Kyle Crnkovic tied the game at 1-1. Lethbridge outshot the Blades 15-10 in the first period.

Saskatoon had a power play to start the second period after Igor Merezhko was assessed a cross-checking penalty with two seconds left in the first. The Blades made good on the man advantage as Gary Haden snapped home his 29th goal of the season to make it 2-1 Saskatoon. The Blades scored another power play goal later in the period when Chase Wouters banged home a puck on a goal-mouth scramble to make it 3-1 Saskatoon. Hurricanes pushed back late in the second and had some chances but both Nick Henry and Jake Leschyshyn both hit goal posts as the Blades led by two goals after two periods.

The Hurricanes battled back to tie the game as Jake Elmer scored for the ninth straight game at the 8:26 mark to first make it a one-goal game; Dylan Cozens and Ty Prefontaine earned the assists. Lethbridge tied the game as Logan Barlage banged home a loose puck for his 14th goal of the season 11:23 of the third period but just 19 seconds later the Blades answered back as Ryan Hughes ripped home his 25th of the year to make it 4-3 for Saskatoon. Kirby Dach scored on a two-on-one to make it 5-3 for Saskatoon with 6:08 to go in the game. Lethbridge attempted another come-back as Taylor Ross sniped home his 31st of the season with less than four minutes left but an empty net goal by Hughes sealed the 6-4 win.

The Hurricanes outshot the Blades 15-7 in the third period and 39-29 overall in the game. Lethbridge went 1/3 on the power play while Saskatoon was 2/3 with the extra man.

The loss for the Hurricanes snapped a three-game winning streak as they are now 5-2-0-0 in their last seven games, with both losses coming against Saskatoon. The ‘Canes fall to 32-18-5-5 on the season with the defeat.

The Hurricanes continue their road trip on Wednesday when they visit the Prince Albert Raiders at Art Hauser Centre at 6:00pm. The ‘Canes will return to the ENMAX Centre on Wednesday, March 6th when they welcome the Brandon Wheat Kings. Tickets can be purchased online at www.enmaxcentre.ca, by calling 403-329-SEAT (7328) or by visiting the ENMAX Centre Ticket Centre.