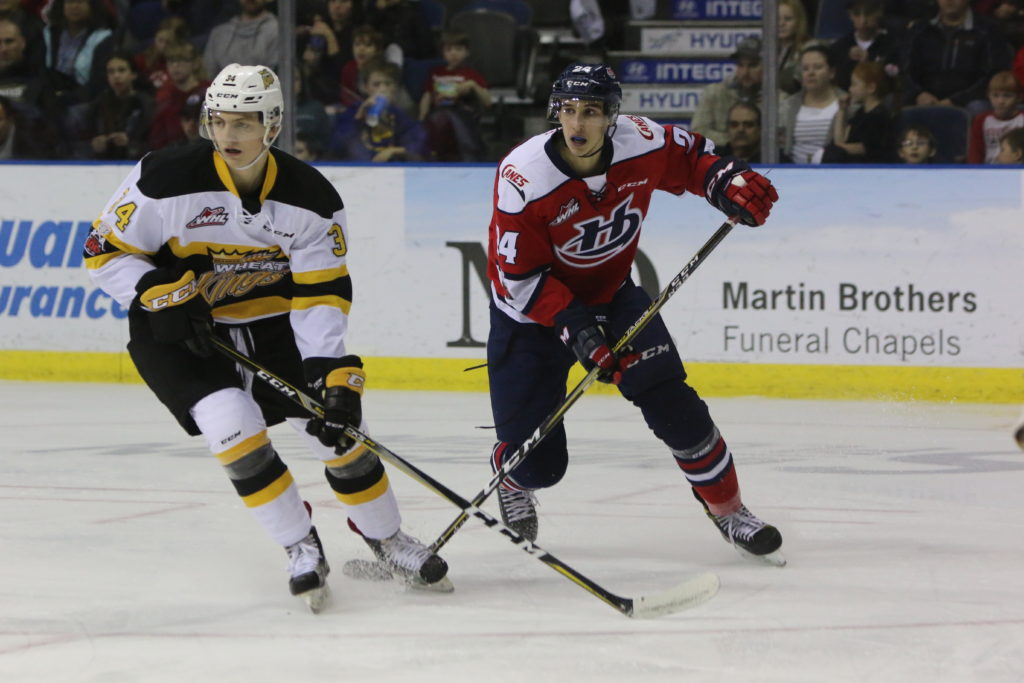 Lethbridge, AB – The Lethbridge Hurricanes began a three-in-three weekend on Friday with a 5-1 loss to the Brandon Wheat Kings as the ‘Canes four game winning streak came to an end.

The Wheat Kings seemed the faster team in the opening frame out-battling the Hurricanes on pucks and generating more chances then the ‘Canes. Lethbridge had a few good looks early to open the scoring on deflections, but Logan Thompson stood tall in the Wheat Kings crease. After the Hurricanes failed to score on their first power play opportunity, the ‘Canes received a second one but it was the Wheaties that struck for two shorthanded goals. Evan Weinger scored at the 14:27 mark tallying his ninth of the season to make it 1-0 Brandon. Weinger tallied again on a breakaway just 39 seconds later for his second shorthanded goal in the period. Brandon made it 3-0 with just 1:23 left in the period as Ty Lewis snapped home his 14th of the season. Wheat Kings outshot the ‘Canes 16-9 in the first.

The second period was a bit more even, but the Hurricanes could not get their shots through to the net. The ‘Canes did have some chances to get on the board including a two-on-one with Tanner Nagel and Dylan Cozens but the Hurricanes failed to get a shot on goal. Brandon added to their lead at the 16:52 mark as Cole Reinhardt snapped one by Skinner to make it 4-0 after forty minutes of play. The Wheaties led the shots 9-8 in the second period.

Reece Klassen replaced Stuart Skinner for the start of the third period and Klassen allowed just one goal on 13 shots he faced. The lone goal came at the 8:05 mark as Connor Gutenberg beat Klassen over the glove moments after the ‘Canes goalie robbed Gutenberg on the doorstep. The ‘Canes broke the shutout bid at the 11:10 mark as Calen Addison roofed one from in tight over the glove of Thompson to make it a 5-1 final.

The Hurricanes outshot the Wheat Kings 16-13 in the third period, but were outshot 38-33 in the game. The ‘Canes went 0/4 with the power play while the Wheaties were 0/1.

The Hurricanes have now lost five of their last six home games with the defeat tonight as their four game winning streak comes to an end. The loss drops the ‘Canes record to 11-13-1-0 on the season and 7-6-1-0 on home ice.

The Hurricanes continue their three-in-three weekend on Saturday when they welcome the Victoria Royals at 7:00pm for the 22nd Annual Canadian Tire Teddy and Toque Toss. Tickets for the game can be purchased online, by calling 403-329-SEAT (7328) or by visiting the ENMAX Centre Ticket Centre.