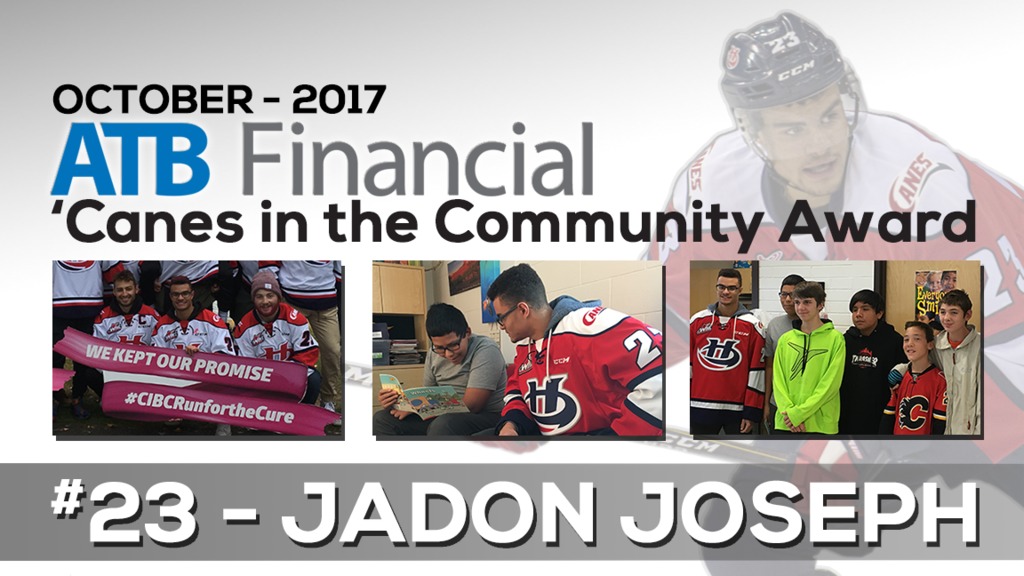 Joseph, 18, volunteered his time for community events on numerous occasions in the first month-and-a-half of the season. Joseph participated in a home visit along with three other teammates for a Lethbridge Minor Hockey Association fundraiser. He was also a participant at the CIBC Run for the Cure and volunteered his time to attend Paterson School for a one-on-one Reading Program.

Joseph, who hails from Sherwood Park, Alberta, also went above-and-beyond during the Hurricanes post-game ‘Skate with the ‘Canes’ following their final game of October spending nearly an hour skating and playing games with children on the ice. He was one of the last Hurricanes to remain on the ice during the skate.

“Jadon is always excited to partake in community events and always shows up with a great attitude,” said Hurricanes Broadcast & Communications Manager Dustin Forbes, who’s in charge of player appearances. “It never takes any convincing to have Jadon included and it’s great to see the initiative that he shows while attending community events.”

In addition to his volunteering with community events, Joseph has had a strong start to the season posting seven points (2g-5a) in 12 games this year all while attending high school.

ATB Financial is proud to present Jadon Joseph with this month’s ATB Cane in the Community Award. ATB Financial specializes in personal banking, business banking, investments and so much more. Visit an ATB Financial branch today for all of your financial needs; you have goals, ATB Financial has the assists!

The Hurricanes return to action Friday night when they host the Spokane Chiefs on ‘Hero’s Night’ at the ENMAX Centre. Tickets for Friday’s game are available online, by calling 403-329-SEAT (7328) or by visiting the ENMAX Centre Ticket Centre.

In addition, any first responder or military personnel can present their identification badge at the ENMAX Centre Ticket Centre for discounted tickets for them and their family, including $18.00 Adult Tickets and $12.00 Youth Tickets.