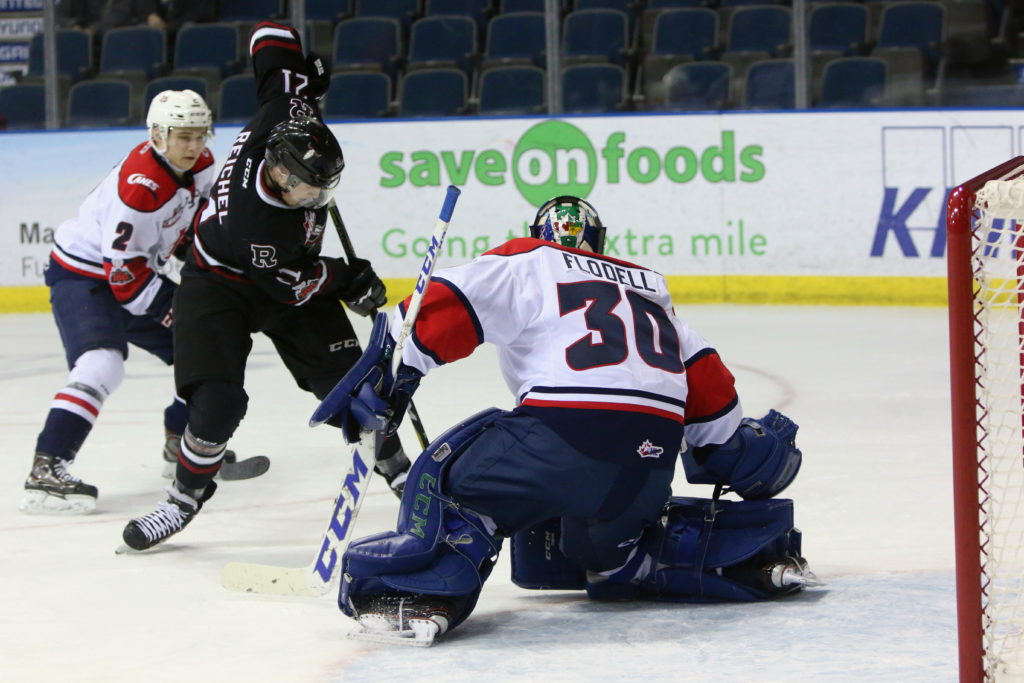 Lethbridge, AB – The Lethbridge Hurricanes welcomed the Red Deer Rebels at the ENMAX Centre on Tuesday night after a massive trade Tuesday morning and the ‘Canes were able to earn a 5-4 shootout victory.

Six new players made their Hurricanes debut on Tuesday as acquired players Logan Flodell, Logan Barlage, Matthew Stanley, Owen Blocker and Brad Morrison suited up for the first time while affiliate player Jacob Boucher made his Western Hockey League debut in the game.

It was early returns as Morrison scored twice in the first period as the Hurricanes picked up a 2-1 lead after twenty minutes of play. Morrison potted his first as a ‘Cane 6:26 into the game on the power play to make it 1-0; Dylan Cozens and Jordy Bellerive earned the assists. For Bellerive, he extended his point scoring streak to eight games. Red Deer equalized at the 13:39 mark as Alexander Alexeyev scored his fifth of the season beating Flodell to make it 1-1. Morrison struck again on the power play for his second of the period, again on the power play, as he buried a Taylor Ross rebound; Bellerive added the second assist. ‘Canes outshot the Rebels 15-9 in the first period.

The Hurricanes built on their lead early in the second period as Brendan Stafford scored his first career goal just 3:17 into the period banging it by Rebels’ goalie Ethan Anders to make it 3-1 Lethbridge; Egor Zudilov and Igor Merezhko earned the assists. Red Deer pulled within one with a power play goal as Reese Johnson tapped one home to make it 3-2. Just 1:36 later, Johnson scored again on a separate power play to make it a 3-3 game. Rebels pulled ahead when Mason McCarty buried his team-leading 20th of the season to give Red Deer a 4-3 advantage. The lead lasted just over five minutes as Cozens buried his 12th of the season on a centering pass by Taylor Ross to make it 4-4; Brady Pouteau earned the second helper. ‘Canes were outshot 14-12 in the second period.

Red Deer replaced Anders with Riley Lamb to start the third period and was terrific stopping all ten shots he faced in the period. The Rebels directed 17 shots on Flodell who turned them all aside as neither team was able to take the lead in the third period. The game went to overtime and in the three-on-three extra session the ‘Canes outshot the Rebels 4-2 with the best chance being a Morrison breakaway but no-one was able to end the game as it went to a shootout.

In the shootout, Morrison and Kristian Reichel scored thru three shooters. In the sixth round, Barlage was able to outwait Lamb and roof it home for the eventual game-winning goal as the ‘Canes earned a 5-4 shootout win.

The Hurricanes outshot the Rebels 41-33 in the hockey game. The ‘Canes were 2/2 on the power play while the Rebels were 2/4 with the extra man.

The win for the Hurricanes improves their record to 18-19-3-0 on the season as they snap a two game losing streak. The ‘Canes are now 12-8-2-0 at the ENMAX Centre this season.

The Hurricanes return to action on Friday as they travel to Red Deer to face the Rebels in the back-half of the home-and-home set before welcoming the Kootenay Ice to the ENMAX Centre on Saturday. Tickets for the game on Saturday can be purchased online, by calling 403-329-SEAT (7328) or by visiting the ENMAX Centre Ticket Centre.