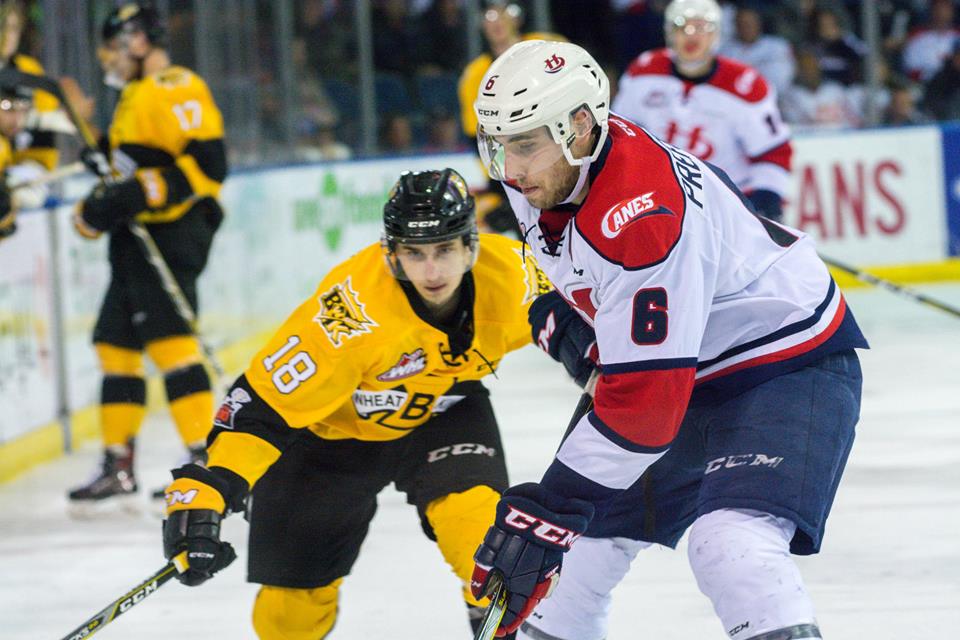 Brandon, MB – The Lethbridge Hurricanes ended a three-game Manitoba road trip Saturday with a 5-2 victory in Brandon against the Wheat Kings as they earned five out of a possible six points on the trip.

The Hurricanes had a strong first period as they outshot the Wheat Kings 12-8 in the opening frame. The ‘Canes opened the scoring on a power play goal by Oliver Okuliar who tipped home his 13th goal of the season to make it 1-0. Calen Addison earned an assist on the Okuliar goal as he surpassed Brent Seabrook for second all-time in franchise scoring among defenseman with 177 career points. Brandon tied the game on a delayed penalty as Neithan Salame snapped home his first goal of the year to tie the game 1-1 after twenty minutes of play.

In the second period, the Hurricanes drove the play outshooting and out-chancing the Wheat Kings. The Hurricanes broke the tie when Okuliar snapped home his second goal of the game and 14th of the season at the 8:33 mark ripping one over the glove of Ethan Kruger to give Lethbridge a 2-1 lead. The ‘Canes added to their lead when Alex Thacker shoveled home his first WHL goal at the 12:14 mark to make it 3-1; Dino Kambeitz and Ty Prefontaine picked up helpers on the goal. Shots favoured the Hurricanes 13-8 in the middle frame as Carl Tetachuk stopped all eight shots he saw in the period.

Brandon pressured to start the third period as Lethbridge-product Ridly Greig scored his third goal of the season beating Tetachuk through the legs at the 7:19 mark on a power play to make it a 3-2 hockey game. The Hurricanes restored their two goal lead just moments later as D-Jay Jerome finished a centering pass from Cozens to make it 4-2. Lethbridge made it a 5-2 game when Okuliar completed his second hat-trick in as many games with a shorthanded goal on a breakaway to round out the scoring.

The Hurricanes outshot the Wheat Kings 34-31. Lethbridge went 1/5 on the power play while Brandon was 1/2 with the extra man.

The win for the Hurricanes improved their road record to a WHL-best 7-2-0-1 on the season as they improved to 11-4-0-3 on the year. It was the 10th straight game that the Hurricanes have collected a point going 8-0-0-2 in that span.

The Hurricanes return to the ENMAX Centre on Wednesday, November 6th when they welcome the Swift Current Broncos. Tickets can be purchased online at www.enmaxcentre.ca, by calling 403-329-SEAT (7328) or by visiting the ENMAX Centre Ticket Centre.